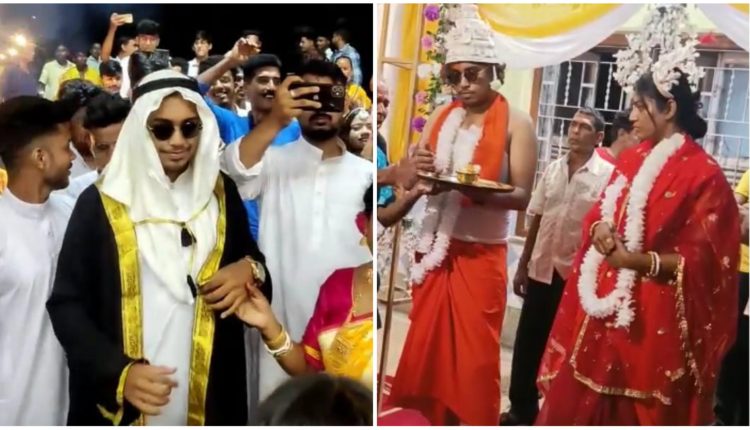 Prasenjit Saha, a resident of Silchar’s Ambicapatty got married last night in a community hall at Sadarghat. He married a Hindu bride and according to him, following all rituals, however, his dress irked a few who went on to complain about the same to the right wing organisations.

This dressing and the “Habibi” slogans by the groom’s friends, who were also wearing a similar dress, were seen as a “disrespect” to the Hindu culture. Last night, the right-wing groups opposed this wedding and went to the bride’s father to seek his apology today. This afternoon, they were re-married as per Hindu rituals and wearing traditional Bengali dress.

Speaking about this emerging culture shift, Mithun Nath, General Secretary – Cachar District, Bajrang Dal said, “Last night when this wedding took place, the people from different sections of society called us and told us about this. The groom was dressed up like a Sheikh of Dubai and the wedding didn’t follow our Hindu culture. All his friends were also wearing a similar robe. This is not our culture.”

Last night when youths from Bajrang Dal wanted to boycott this wedding from taking place, the senior members stopped them. Speaking further about this, Nath said, “This morning when our boys went to the groom’s family to ask about this disrespect, his family was also ashamed by this stunt. Their relatives were hurt by this dressing. We have asked the father of the groom to apologise to the society and asked to marry them again following Hindu rituals”.

The senior member of Bajrang Dal has expressed his disappointment and said such type of anti-traditional activities must be stopped before it emerges as a new trend further diminishing the Hindu traditions.