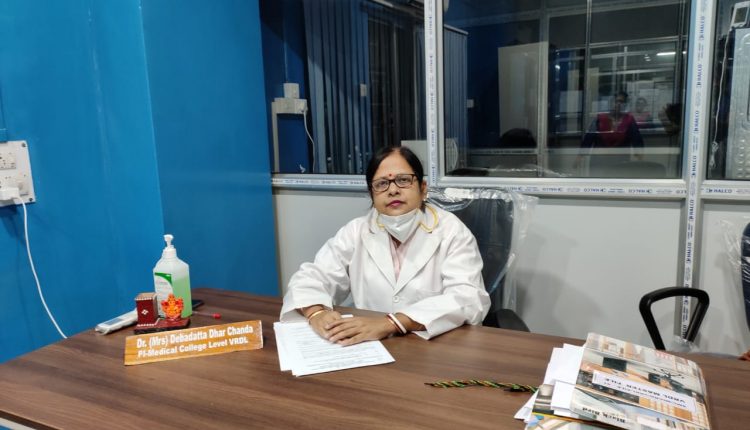 1 lakh and counting; Understaffed Lab at Silchar Medical College that has been constantly over-delivering

While for the state, it was massive news, inside the lab it was a nervous situation. Dr. Debadatta Dhar Chanda, in-charge of the COVID testing unit was on back to back calls with specialists in Guwahati. After Guwahati, it was time to call the National Institute of Virology, Pune. “We were certain that we have got a positive case, but it was the first one, so, we just wanted to be certain before calling it,” recalls Dr. Chanda.

NIV confirmed and it was the first positive case in the state. On September 14, Dr. Chanda and her team crossed the 1 lakh reverse transcription polymerase chain reaction (RT-PCR). “It is a huge achievement, but you cannot celebrate when people you know are dying,” opines Dr. Chanda.

These 1 lakh tests do not include samples tested using Rapid Antigen Test Kits but only RT-PCR. Let us know more about the road to 1 lakh complex yet sophisticated tests from the horse’s mouth.

Edited excerpts of the interview with Dr. Debadatta Dhar Chanda

Can you please share your experience in the early days of Pandemic? How was it when you got the first samples?

Initially, there were only a few samples. The challenge back then wasn’t the tests, the hardship was understanding the protocol. SMCH was accredited as a testing lab by the ICMR. The guidelines back then were far stringent, the protocols made it mandatory for us to follow a process that was both rigorous and detailed. Silchar, Guwahati, Pune and then back to Silchar, that was the channel.

Visuals of dead bodies lying around in Italy were on television screens and you and your team were testing samples to determine if someone has the same infection that’s caused a pandemic. What was the mood in the lab and what about family members?

Frankly, there was no time for us to think about all that. Once we had the first COVID patient in the state, the number of samples tested per day grew manifold. It was just test, test and test. My family never had an issue with it. Everybody understood what we were dealing with. Remember, we were testing samples collected from all three districts of Barak Valley, Dima Hasao and Mizoram. Later we trained doctors in Mizoram and they started testing, Dima Hasao samples were not sent here. So, we did not have that moment to pause and contemplate. We have been on the run 24X7 and we know it is a marathon.

Was the team equipped to deal with such a massive number of tests per day?

We started with one research scientist and one research assistant and two technicians in the VRDL. It was a small team of four. But then the workload exploded and the government deployed three more research scientists and NHM, Joint Director Health gave us seven more technicians. So, we became a team of 14 warriors and the war against an invisible virus is still going on.

What has been the run rate so far. Are you happy with the numbers achieved?

One lakh plus calls for a celebration, but, when you have people you know, dying around you, celebration is the last thing that comes to your mind. Coming to run rate, we had told the government in the beginning that we will test between 600 to 800 samples a day. These are RT-PCR tests and each takes around eight to ten hours. We have over-delivered and our score, so far, has remained more than thousand per day. If I recall correctly, 1800 plus is the highest we have tested in one day.

Did you ever feel it’s getting too much, as there were several spikes?

When the lockdowns were lifted and vehicular traffic was allowed, suddenly we had a wave of samples. Soon it was not only new samples, but also those waiting for a discharge. Back then negative on RT-PCR was a compulsion before discharge. That’s when we saw samples piling up. The second such influx was recently when the teachers of all three districts were tested. I would say, we have managed both the situation well. Government relaxing the protocols and allowing discharge on RAT has helped us share the load.

While everything was running smoothly and perfectly, there came in the Sushmita Dev controversy. She was first said she is negative and then it changed to positive. Did you have doubts on her test?

(Laughs)… it was just a misunderstanding coupled with miscommunication. Principal Sir could not reach me as my phone was probably out of network coverage and that is why he rang up someone else in the department. That person, misread Susmita Das as Sushmita Dev. It was not a controversy, but a human error. I do not have an iota of doubt that she was positive for COVID19. In fact, we had rerun her samples and then sent it to NIV Pune too. By then NIV had told us that we do not need to send details to them. Yet, since we were dealing with a VVIP and former MP we sent it. Later she appreciated the department and the team at Microbiology.

How would you sum up your entire experience during the COVID?

I wish I could sum it up, none of us know where the tunnel ends and where is the light. Frankly, it is a long uncertain journey that we are in. However, digressing a little, I must say that we have managed to achieve this number because Dr. Babul Bezbaruah took initiative to equip the Virus Research Diagnostic Laboratory in 2019. In fact, he played a pivotal role in sending me, research scientists and technicians to NIV Pune for a training last year. We are lucky that we had the infrastructure and the skills to deal with the situation. I was transferred to Diphu last year but Dr. Bezbaruah got me back in March as in-charge of COVID19 to deal with the situation.

Biswakalyan Purkayastha contributed to this reporting