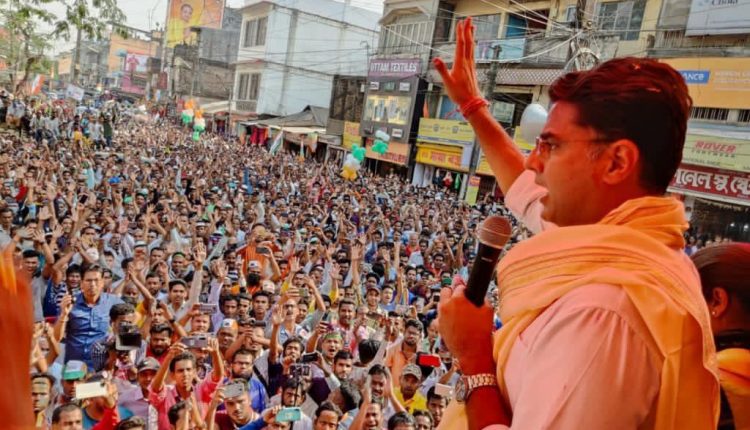 “15 years of Congress vs 5 years of BJP, the facts are out there on the ground”, says Sachin Pilot in Silchar

The Assam Vidhan Sabha election is knocking at the door. With campaigning at its zenith, both the BJP and the Congress are hitting out at each other in full swing over their failures. In the Congress camp, Deputy Chief Minister of Rajasthan and President of the Rajasthan Pradesh Congress Committee, Sachin Pilot has arrived in Silchar today to campaign for young Congress candidate Tamal Kanti Banik. In the public event held at the DSA ground in Silchar, Sachin Pilot raised several issues on how the ruling BJP government in Assam has failed over the past 5 years of governance.

“The people have faith in the Congress party. 15 years of Congress versus 5 years of BJP, the facts are out there on the ground”, said Lieutenant Sachin Rajesh Pilot sounding confident about their win in the upcoming elections. Further adding he said, “Unemployment is a major issue in Assam, and I think the Congress party is absolutely resolute to deliver their promises on employment. In the 2nd of May, when the results come out, we’ll be forming the government.”

Defending his optimistic stance, Sachin Pilot said, “The people wanted a change after 15 years, they gave BJP a chance. In the first 5 years we have seen too many contradictions, price rise, unemployment, no investments came, the special status of Assam taken, people have suffered. And now they want the Congress back.”

When asked about the CAA and the NRC, Sachin Pilot quite tactfully handled the question by reiterating the fact that it’s all the BJP’s plan to divert attention. “How much does gas litre cost today? ₹900. How much did it cost during Manmohan Singh Ji’s time? How many jobs have been lost after demonetisation? How many after the lockdown? You want to answer those questions. And they keep making divisive issue, kabhi Kashmir, kabhi Pakistan” said the Congress leader.

Whereas the Congress keeps on claiming that they’re coming to power, the BJP on the other hand thinks otherwise. When asked about that, Sachin Pilot said, “BJP is how old in Assam? Only a few years. It also depends on two or three individuals. As an organisation, the people have faith in the Congress party, and especially in the cross-communities of Assam, Congress will come out victorious.”

Further, when asked about the allegation of ‘unholy alliance’ put by the BJP for allying with the AIUDF, Sachin Pilot was quick to retort. He said, “Who are they to decide what’s holy and what’s unholy? Who is anybody else to decide that?”