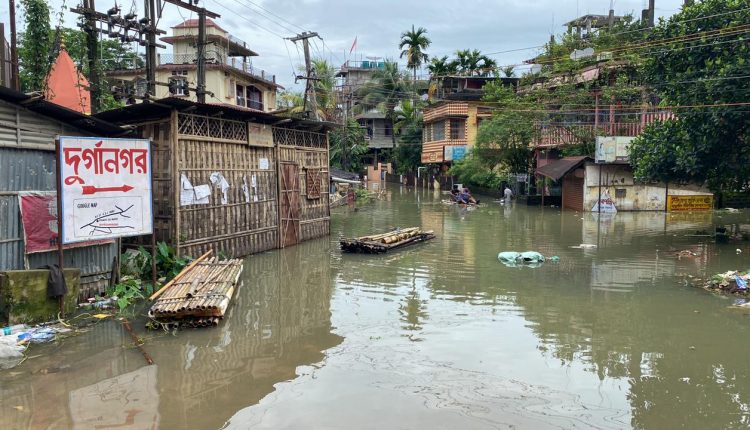 As Silchar has been amidst the worst situation the town and its residents have faced in recent times, we were no different and had been stuck in our house in Tarapur, just like others in various other parts of the city under water.

After facing the mayhem for a few days, I was seemingly worried about my ageing parents and my infant as my husband was also stuck far away from us in Maibong. The flood scenario, coupled with the rising fear of dacoits and the thought of spreading diseases as an aftermath, made us take the decision to desert our home in this condition and travel to my sister’s place in New Delhi.

The decision was taken quite unanimously and with very little or no cellular data, the air tickets from Silchar to New Delhi were booked immediately for the next day for all four of us – Me, my parents and my infant kid, by relatives living in Delhi.

But then there was this big question on how to move out of the house and reach our Silchar airport?

My house is in Nabapally Lane, Durganagar in Tarapur and the water level in my lane was neck high. Tarapur has been one of the worst affected areas and we were worried how to navigate our way to the airport.

We heard that the connectivity to the airport, which was disrupted for a few days, was restored, but we were more worried about how to cross our lane and reach the main road. A few of my relatives however managed to speak to some cabbies who mentioned that the connectivity to the airport has been restored but we needed to come to the E&D Colony point where the cab was scheduled to pick us up.

1 kilometre away from our house is E&D colony point but to us it was like million miles away. The lane filled with neck deep water was a concern. With the help of a few close friends and relatives, we finally managed to hire a makeshift bamboo raft which all four of us boarded along with the luggage and three friends along with the custodian of the raft pushed us walking beside us in that neck deep water.

The boatride continued for 5 minutes we were charged INR 400 just to cross our lane which is hardly 200 meters. After that we were lucky enough to get an ASTC bus which we boarded near the Tarapur 2nd gate and the bus dropped us at E&D Colony point for a fare of INR 200 for around 500 meters.

As we deboarded the bus, our cab was waiting for us and then this was a rather smooth sail till the airport. Though there were patches that were submerged under water in between, the cab navigated through without any hassles till the airport.

That day, as per our cabbie, he had escorted another passenger to the airport from the badly affected ambicapatty area. That was also a smooth drive, he said from Sadarghat till where the passenger has to manage himself.

Now as we sought refuge in another state owing to the pitiable condition of my city, I am thinking and praying for the well being of my fellow Silcharians as they get ready to face the ugly aftermath of the devastating floods.

The author of this article Mousumi Paul is a teacher by profession.