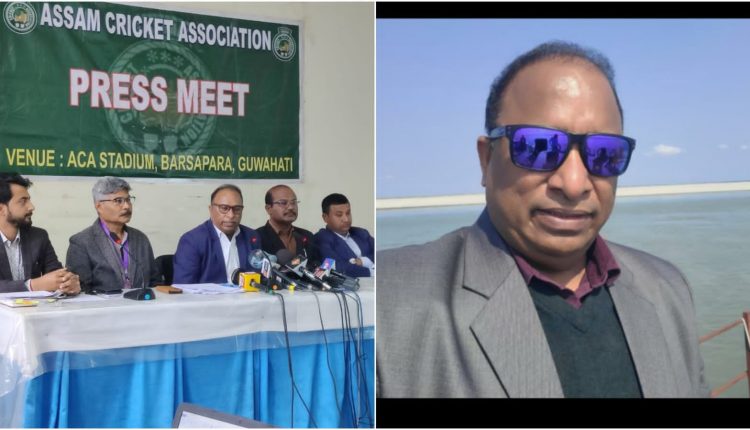 The Apex Council of the Assam Cricket Association (ACA) has held a press conference earlier today and announced the judgment following the hearing on February 23, 2022. The Council heard the complaints of Silchar District Sports Association’s General Secretary, Bijendra Prasad Singh, and recorded the statements of Jorhat and NF Railway Cricket team.

After hearing all the parties, the ACA announced the judgment that is historical in some ways and lays a precedent for future generations to follow. With a mellow tone, General Secretary of Assam Cricket Association, Devajit Lon Saikia said, “It is not a moment to rejoice nor are we happy announcing this.”

Coach and manager, Satyabrata Chakraborty has been banned for life. The captain, Ronit Akhter has been banned for three years and the NF Railway Team won’t be able to participate in any ACA or ACA affiliated tournament for the next three years. The decision comes after Silchar DSA had complained that NF Railways and Jorhat joined hands to influence the outcome of the match and as a result knock Silchar out of the prestigious JK Baruah U-19 inter-district tournament.

A seasoned advocate who was once a First Class cricketer, Devajit Saikia defined this as a challenging moment as the association was dealing with young minds and the future of the State cricket team. In an exclusive interview with Barak Bulletin, Saikia shared the process of the hearing:

You banned NF Railways but gave a clean chit to the Jorhat Cricket team, can you share the process of the hearing?

Sure, we found out that Jorhat was not involved in whatever had happened. DSA Silchar’s complaint was that the match was fine till the 11th over and all complaints were with the last two overs.

These are the two overs Jorhat scored 38 runs and qualified…

Yes. So when we asked the umpires, they said that Jorhat captain wanted to play the match while Railway captain was okay for stumps. Since they were at the loggerheads, it is clear that there was no understanding between the two captains. Moreover, between the 11th and 12th overs, there was a gap of two minutes according to the umpires and Silchar Team management. So, in two minutes, it was impossible to reach an understanding after doing all the complex calculations.

Is that why you ruled out the allegations of match-fixing?

Even the umpires were given a clean chit?

Yes, the allegations by Silchar against the umpires were that they have picked up the bails to declare stumps. The umpires were asked about the same and they explained that they did not pick the bails up but there was a stumping. Right after the stumping, the umpires asked both the captains if they would want to continue. That is when the Railway team’s skipper said they are okay with ending the match there. But immediately after that, the Jorhat captain argued and said they would want to continue. Now, what is the rule? The umpires can only call it stumps when both captains agree or it is a bad light. Therefore, the umpires were not at fault.

So, how did you conclude that the Railway team is at fault?

We asked the captain of the Railway Cricket team to explain the field placement. The skipper said that he was going aggressive in looking for cricket. I personally asked him what was the bowler bowling and he replied that the right arm bowler was bowling inswing so outswing to the left-handed batter. The slip and the offside field were understood. But he had the same field with so many slips when the right-hander was in the strike. For an inswinger why would you have slips and offside field. The captain and the manager had no answer that could stand the scrutiny. There was no factual standpoint to back the arguments.

Why according to you did the Railways team do so?

We found out that there were certain differences between the Railways and the Silchar team from the very beginning of the tournament. It is not because NF Railways wanted to benefit Jorhat and that is why they conceded the runs. NF Railways deliberately played badly to damage Silchar’s chances. In the process, they have done something that is detrimental to the spirit of cricket which has brought bad repute to the Assam Cricket Association. It was in the national news as well as in the State bulletins. For very little fault of the Association, it was defamed.

It that why you took the strict decision?

When you say that the Railway team has been banned, can the players of the team play for other teams?

Yes, they can. Captain places the field and if players are asked by the captain to stand at a certain position, there is very little that they can do.

There were demands to keep the Final withheld, while there was a hearing held, the final continued, your reaction to it?

Look, we did not find any involvement of Jorhat in this entire fiasco. Runs were offered to them on a plate and they scored. It is all within the law of the game. So, had we reprimanded Jorhat, it would have been unfair to them and they would have complained against us.

The last question to you, you are a former cricketer yourself, how difficult was it for you to go through the process as you were dealing with the potential future of the state, country?

It is not a happy moment for us. But if we wouldn’t have taken any action, it would have been unfair to Silchar as they have been denied the opportunity to play in the final for the trophy. At the same time, leniency would have encouraged captains and managers of other cricket teams to do the same mischief. As a result we had to take the steps.