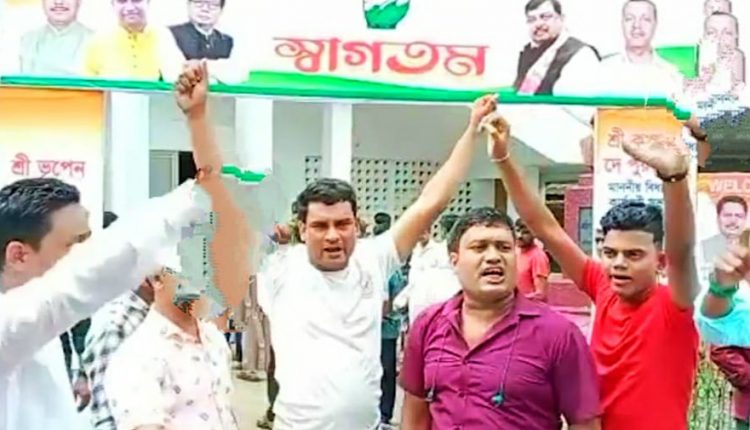 Sources close to the committee claims that the reason behind this staged protest and mass boycott is because the General Secretary of the Karimganj Congress Committee, Zakariya Ahmed Panna, was not offered a place on the stage which irked him and his supporters. Zakariya Ahmed also happens to be the son of former Congress MLA from Badarpur, Jamal Ahmed. “We have been ignored for quite a long time. Today, we couldn’t even get our voice on the stage as our demands were turned deaf ears. We protest this attitude of the Karimganj District Congress Committee and boycott them”, said Zakariya Ahmed while staging a walkout from the event.

The event was scheduled as a routine meeting of the Karimganj District Congress Committee, where a discussion was held to revamp the entire district bureaucracy of the Congress Committee to include new and efficient members in all the levels of the district committee. As a part of the District Committee, the party workers from the Badarpur area were expecting a say in the meeting. But as they were not brought up to the stage, they got insulted by the gesture and staged a boycott of the event.

When Barak Bulletin got in touch with APCC President Bhupen Bora, he said that the incident was tragic and it happened merely due to a ‘ communication error’. “The meeting was organized to plan out the future plans of the committee. We are planning to revamp the party right from the root level to the district level to the Assam Pradesh level as well. As new district committee members have been elected, including the President, it is my duty as the President of the APCC to receive the new members and guide them to work for the party as well as the betterment of the people. That was the agenda of this meeting with the party workers today”, said Bhupen Bora.

But at such an important meeting, why did some of the party workers decide to walk out amid the air of frustration? To this, APCC President Bhupen Bora said, “Congress is a democratic party. In our party’s philosophy, each and every member has a say and we listen to every party worker’s opinion. Today it was an unfortunate event that some of our workers felt that they didn’t get the opportunity to voice their opinion, but I should say that this is nothing more than an issue of communication error. I want to assure everyone concerned that everybody’s welcome at our party and this unfortunate issue has been addressed already, so nobody needs to panic about it. So the moment we came to know about the dissatisfaction, we accommodated our party workers”, asserted Mr Bora.

Although the APCC President has assured that the incident was nothing but a consequence of some ‘miscommunication error’, it still leaves a lot of room of air for questions to be answered. Zakariya Ahmed, the General Secretary of the Karimganj District Congress Committee, has already aired his frustration regarding the attitude of the district committee. He even went on to the extent of blaming the APCC President and Congress MLA Kamalakhya Dey Purkayastha for this mishap in the Karimganj district committee. Now it remains to be seen how the Assam Pradesh Committee of Congress deal with this mutiny at a juncture when they’re looking to reconsolidate their position in the state’s politics.