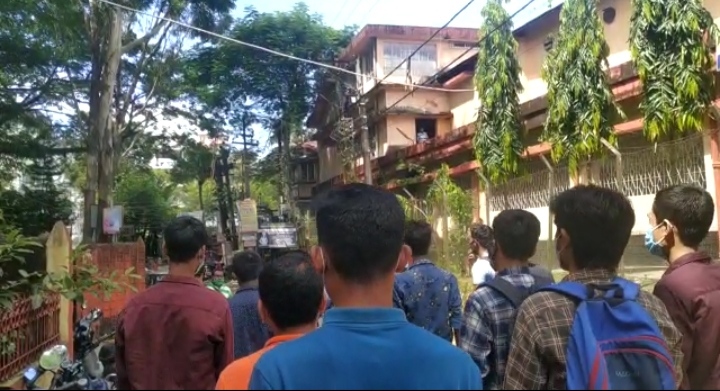 Students of Guru Charan College in Silchar gathered today to protest against the increase in fees of self-financing courses like Computer Science, BBA, Biotechnology. The Education Ministry of the state has waived off admission fees at all levels in government institutions. However, students of the self-financing courses were kept out of the benefit.

“We know that we can’t evade away from paying our fees. But we were expecting a bit decrease in admission fees in view of the current pandemic situation. But during form fillup, we encountered that the admission fee for the courses has not been reduced but hiked,” said Subhashis Choudhury, a student of the College.

He explained, “In our CBCS system, we have Honours paper. Along with that, we have GE (General Elective) and some students also keep one extra AGE (Additional General Elective). In the last two years, speaking from my personal experience, I had to pay 18000+ for my one academic year. I had Computer Science Hons and Maths as GE. I didn’t have any AGE. So my total fee stood at 18000, where I had to pay 12000+ for Computer and 6000 for maths.”

Choudhury opined that the case of BBA is also bad. “Not every student is capable of paying Rs 23-24000 admission fees at one go, in this pandemic situation.”

The students protesting today demanded in front of the Principal to consider this and he assured them that the matter would bed discussed and considered. “We will wait till August 28 and proceed according to the kind of response we receive from the College,” asserted Choudhury.

The protest worked in favour of the students as the Principal kept his promise. The college administration worked on the demands of the students and reduced the admission fee for Computer science Hons admission from Rs 19,700 to 13000. Also, the Biotechnology Hons admission fee was brought down to 22000. It was earlier around 28000. This was done after considering the fact that the GE and AGE subjects were not self-financed,” informed Choudhury.

However, the BBA students were not provided with any relaxation on their admission fee as it is a fully self-financed department.