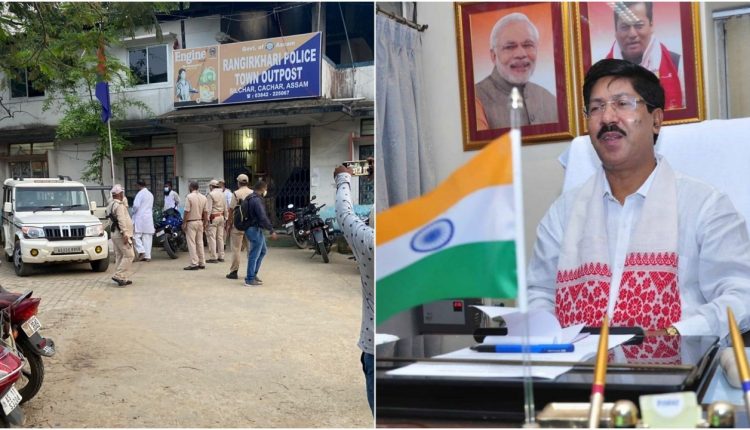 Former deputy speaker of Assam and incumbent Sonai MLA, Aminul Haque Laskar alleges that his sister’s residence was attacked by AIUDF supporters. At around 3:00 pm today, around 25 miscreants attacked the residence of Rauf Choudhury who is Laskar’s nephew in relation.

Rauf Choudhury informed that his residence near Mazumdar Bazar, Sonai Road/Link Road was attacked by around 25 miscreants most of whom are allegedly associated with the AIUDF. According to his statement, they broke inside the house when the family members were preparing Iftar (evening meal in the holy month of Ramadan). “They pelted stones and soon started pouring kerosene and petrol. Many of them were screaming aagun laga (Set ablaze). I was not at my home and by the time I reached my house with Police officials, many of them fled,” said Rauf Choudhury.

“We were informed that the residence of Aminul Haque Laskar’s sister is under attack. We reached the spot and apprehended three individuals. They are from Sonabarighat and Dhonehori area. We are investigating the matter,” said Pranab Kumar Deka, officer-in-charge of Rangirkhari Police Station.

However, Aminul Haque Laskar is unhappy with the way the Police is handling the entire chain of events. “This is not the first time BJP workers in Sonai belonging to the Muslim community have got attacked. It happened on March 30, when the honourable chief minister was campaigning. Then on April 1 at Dhonehori where an illegal arm was recovered and today. Also, a female BJP worker’s house was attacked, two polling agents of the BJP in Dhonehori have been socially boycotted and a fine of Rs 5 lakh has been imposed. Police complaints were filed on each of these occasions but hardly any action,” said Laskar.

He added, “AIUDF just has an MLA elect in Sonai and they have started running havoc. They are unconstitutionally forming laws and implementing them. While they do so, the Police watch as a mere spectator. May be one of the senior officers is in hand and glove with the goons of the AIUDF. That is why they have unleashed hooliganism without fear. I will meet the CM today and brief him about the state of affairs in Sonai.”

At Dhonehori, on polling day, fire was opened leaving four injured. Contesting candidate from BJP, Aminul Haque Laskar was kept hostage inside the polling station for more than two hours as police calmly negotiated the irked mob and rescued him unharmed. The locals alleged that Aminul Haque Laskar has himself opened fire on the voters with a nine mm pistol in his possession. The pistol was later handed over to the police by locals which they have alleged that they found from the polling station itself where Laskar was seating for more than two hours.

“If the gun was with me, wouldn’t the SP, Additional DGP and other top officers of Assam Police who went there, find it? This gun belongs to Titu Panchayat who came in to create a scene. It is unfortunate that the Police did not take any action against the original occupant of the gun,” said Laskar.

Aminul Haque Laskar, after the incident on April 1, was called for recording his statement at Silchar Sadar Police Station, where according to sources, the police interrogated him. “There are people lodging false cases against me. Whereas, the criminals committing non-bailable offences are getting bail. But the Police is not taking any action and because of their inaction these miscreants are fearlessly attacking residents in broad daylight,” asserted Laskar.

Alongside Police, he also took a jibe at the AIUDF MLA. “After just one AIUDF MLA got elected, they have started Talibani activities. Imagine what would have happened if they had formed the government. They are now prohibiting the BJP members belonging to the Muslim community from entering the Mosques. It won’t be a surprise if they are assaulted and killed. Exactly how the TMC goons are attacking BJP workers in West Bengal, the AIUDF backed goons are attacking BJP workers in Sonai. They are making Sonai the West Bengal of Assam,” said Aminul Haque Laskar.

According to Police sources, the three apprehended by Police are Altaf Hussain Laskar (Titu) who is the former Sonabirghat Panchayat. Currently, his wife is the Panchayat and represents the Congress in the GP. The other two apprehended are Masum Barbhuiya, Faizal Karim Barbhuiya who allegedly are members of the AIUDF.