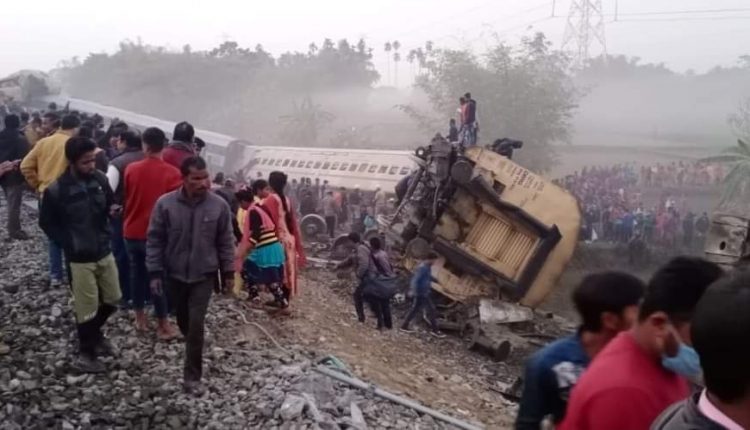 Five people were killed and at least 50 were injured after 12 coaches of the Guwahati-Bikaner Express derailed on Thursday evening, the Northeast Frontier Railway (NFR) said in a statement. The train was bound for Guwahati and the accident took place in the Maynaguri region around 5 pm, the statement said, adding that 1,053 passengers on board at the time.

Commissioner, Railway Safety, will conduct an inquiry into the cause of the accident, a railway official said in New Delhi. Railway Minister Ashwini Vaishnaw, Railway Board Chairman and Director General (Safety) have reached the accident site for inspection.

According to railway officials, six coaches were severely impacted.

“We felt a sudden shock. We were all rocking violently and luggage kept on upper berths tumbled all around,” said a passenger.

A partially mangled coach got perched atop another under the impact, while a few bogies had hurtled down the slope and overturned.
Hundreds of people from nearby villages collected at the spot, and were seen lending a helping hand to passengers who had got trapped inside the collapsed coaches. Some of the bogies had got detached from the rest of the train under the impact, while wheels of some came off.

The West Bengal government has assured all help to Assam in connection with the train derailment, Assam Chief Minister Himanta Biswa Sarma tweeted on Thursday.

Sarma spoke to his West Bengal counterpart Mamata Banerjee soon after the mishap on Thursday and she assured of all assistance and updates about the situation.

Sarma tweeted, “I spoke to Hon’ble West Bengal CM Smt @MamataOfficial ji to inquire about the Bikaner-Guwahati Express mishap.” “She assured to provide all help & assistance on ground and also keep us posted on the ongoing situation. I thank her for offering all her support to the victims,” he added.

The Indian Railways has announced Rs 5 Lakh ex-gratia for those killed, Rs 1 lakh for the severely injured and Rs 25,000 for passengers who suffered minor injures.