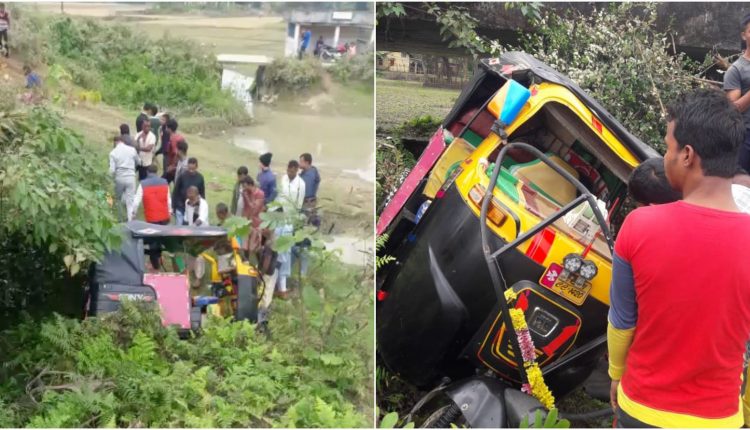 Auto-rickshaw with 10 passengers meets with an accident in Cachar; 8-year-old dead on the spot, several injured

In a gruesome road accident in between all the festivities of Makar Sankranti an eight-year-old has lost his life. The incident happened at Ranigaht of Borkhola constituency, where one auto-rickshaw carrying 10 passengers lost its control and balanced off the road to a low-lying area.

The auto-rickshaw that is generally boarded by five passengers went on to drive with more than double of its capacity. A 100-year-old co-passenger is also said to be severely injured. Among the 10 passengers, other than the hundred-year-old were four children.

According to available information from the spot of the accident, it is being said that all the passengers are of the same family.

The auto bearing number AS 11CC 1420 was heading towards Silchar when it fell off a culvert into the bushes. According to sources, all the passengers are severely injured, whereas the eight-year-old “Rocky Nath” has lost his life on the spot.

Eight passengers from the said accident have been rushed to the Silchar Medical College and Hospital’s Emergency Ward, along with the body of the deceased child. It is being said that the family was going to visit a relative on the occasion of Sankranti.

Accidents due to the overloading of passengers in auto-rickshaws are not something new, still, people sometimes forget the risk involved in such a stunt. Locals have rushed to the spot immediately and helped in the evacuation of the passengers injured.

Landslide: Silchar – Guwahati road via Shillong likely to open by 11:00 am: DC…