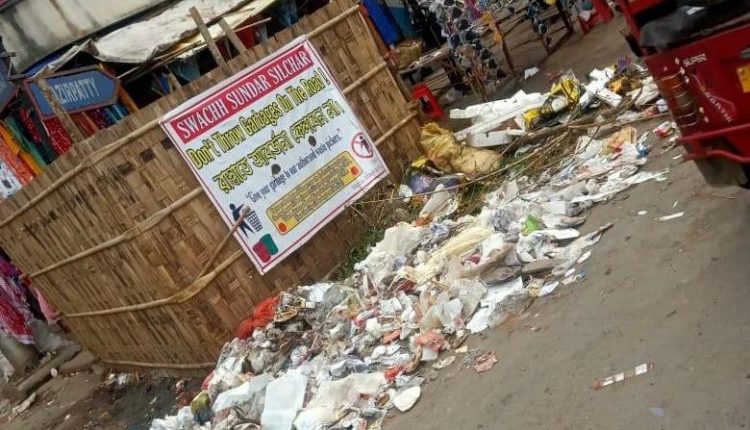 Heaps of garbage full of polythene bags, plastic and glass bottles, kept unattended on roadside in commercial and residential places are not a rare sight in the city of Silchar. Call it lack of proper planning or lack of community conscience, cleanliness and organized garbage disposal is one issue this city has been battling for many years now.

Although trash bins are found in certain spots of the city, yet they get overburdened littering the entire vicinity. Recently, the Silchar Municipal Board (SMB) has initiated the door-to-door source segregated collection of garbage for which bins are being distributed to each household and commercial establishment.

To do away with community dumping, the source segregated collection of garbage initiative has been taken up where Municipality workers would visit every household to collect the garbage individually through the distributed bins. But despite such efforts, garbage heaps are still found in parts of the city which is polluting the entire atmosphere of Silchar. District administration, Cachar posted on Facebook how there is a stockpile of garbage right in front of a banner which reads, “Don’t dump garbage here.”

The SMB has repeatedly requested the public to avoid dumping and rather use the buckets provided to them for the source segregated door-to-door collection of garbage. Jessica Rose Lalsim, Executive Officer of the SMB, said that they’re going soft as of now and that’s why they’re still cleaning up the heaps of garbage around the city, but after some time, they’ll be bound to take legal action against offenders found dumping in public spaces.

While talking to Barak Bulletin, Jessica Rose Lalsim said, “We’ve been repeatedly appealing to the people of this city to not go for community dumping and rather opt for the door-to-door segregated source collection method of the SMB to avoid making a mess in the roadside and commercial places. Even though it is not our duty to clear garbage from junctions and commercial points, still we’re doing it as of now so that people slowly shift to the alternative garbage collection method. We’ve already started distributing buckets to everyone for the individual disposed of garbage, but if people still keep dumping in public places, we’ll soon be bound to take legal actions under the Assam Municipal Act.”

Many people have complained that the lack of adequate trash cans and dumpsters is one of the reasons behind this garbage mess that is witnessed almost every day in the streets of Silchar. But the SMB Executive Officer disagrees with it, saying that while most cities around the country are getting rid of this dumping culture, Silchar too should opt for the segregated garbage collection method to abolish community dumping.

She adds, “Garbage disposal through the segregated door-to-door collection is the only sustainable way to get rid of garbage heaps and thus make Silchar pollution-free as well as free from harmful plastic wastes as well. We’ve been distributing buckets to every household as well as commercial establishments like shops, markets, etc. to encourage them to use garbage disposal through those buckets, which can later be collected by the authorised SMB workers on a daily routine. This culture of community dumping needs to be discarded as soon as possible to make Silchar ‘Swachh’ and ‘Sundar’.”

She also reminded that the SMB is not responsible for the clearance of garbage in junctions and commercial points of the city. “Everywhere around the globe, people pay garbage taxes to avail garbage collection services from the local authority. Here we don’t collect as such, and thus it becomes quite difficult to collect and get rid off garbage full of plastic and polythene all around the city especially as these are non-biodegradable things. Hence we once again appeal the people of Silchar to take the buckets provided by the Municipality for segregated garbage disposal to keep the city litter and garbage free”.