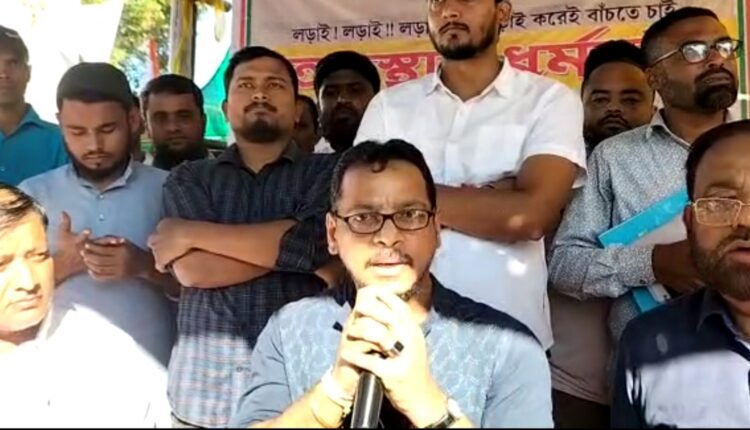 “Congress party is still alive and we won’t tolerate the injustice of the BJP government” echoed from the loudspeakers set by the protesters of the different wings of the Congress Party. On Wednesday in the protest organised by the Congress party’s Cachar District Committee with the demonstration against unemployment of Barak youths in the government sector job. Different speakers including MLA Khalil Uddin Mazumder, and Silchar Congress President Tamal Kanti Banik questioned the role of local BJP leaders.

During the demonstration, the Congress party unanimously announced that BJP failed to provide posts to the unemployed youth of Barak Valley in the recently held Grade 3 and Grade 4 examinations. They further alleged that the unemployed aspirants were promised jobs by the Chief Minister himself but those proved to be hoaxes for those students.

Rajen Palit, President of Narshingpur Block Congress said, “Our students have been wrongfully deprived of their seats and the state has discriminated against the students of Barak Valley time and again. Despite scoring good marks they have not been allotted seats in the recent examinations. We want justice for these students who worked day and night for these exams”. However, there were no mention about the source of the information.

The young Congress leader further said, “We want answers from the Chief Minister, ministers, Parimal Suklabaidya and MP Rajdeep Roy, are our students not meritorious enough? If they can’t answer, we will gift them bangles from our All India Mahila Congress. We urge everybody not to be afraid and actively participate in the protest with us. The Congress has been and will always be with the people of this Valley.”

In the light of recent cases of illegal Burmese Supari circuit and the woes of local areca cultivators of Assam, the MLA of Katigora, Khalil Uddin Mazumder said, “The local businesses of betel nuts have hit a setback because of the increasing case of illegal Burmese Supari exports. The CM assured an SOP long back for the sale of our locally grown betel nut. But where is the SOP? We have approached the SP as well as the DGP to see to the matter but they have been turning us down over and again stating the same reason that they won’t be able to help in any way unless the SOP is circulated. The smuggling of Burmese areca nuts is mostly through the Dholai area and we request the Government to arrange for police investigations in this area and put a check on the smuggling of this illegal Burmese supari so that our local supari businesses do not have to suffer any more losses”. Sloganeering continued as the Congress members of the district protested against the government in power.