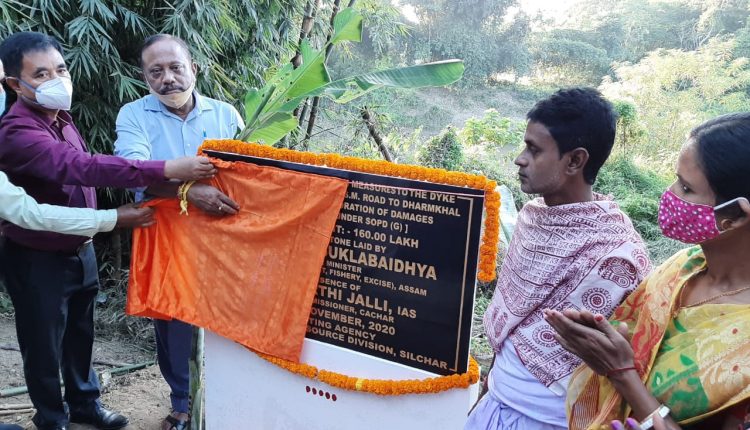 BJP government not only working for benefit of people, but also for the welfare of the people,” Parimal Sukla Baidya

State Minister for Forests and Environment, Excise and Fisheries Parimal Sukla Baidya made the remarks while addressing the laying of foundation stone ceremony for the construction of a dam at a cost of 1 crore 60 lakhs rupees at Jamalpar in East Dhalai on Monday afternoon.

He said the central government led by Narendra Modi and the Assam government led by Sarbananda Sonwal have been able to meet the basic needs of the people. Various projects including old age pension, disability allowance, widow allowance, ration card, Kisan Samman Nidhi, Chief Minister’s Agriculture Sa-Sajuli Yojana, Arunodaya project have been implemented during the tenure of this government.

He said all this is possible because of the strong will of the government. He said people were living in misery for a long time due to non-repair of river dams but people would not be suffering today if the Congress government had not done politics for the sake of staying in power. He said the present BJP-led central and state governments have stood by the people. The present government is spending crores of rupees for the construction of river dams. The BJP government has the mentality of going beyond caste and carrying people from all communities, which has given the people a bright image of the government. He called upon the people to stand by the BJP government in the interest of development. Minister Parimal Shuklavaidya laid the foundation stone of another dam at a cost of 1 crore 60 lakh rupees to prevent erosion of Rukni river in Malugram on the same day.