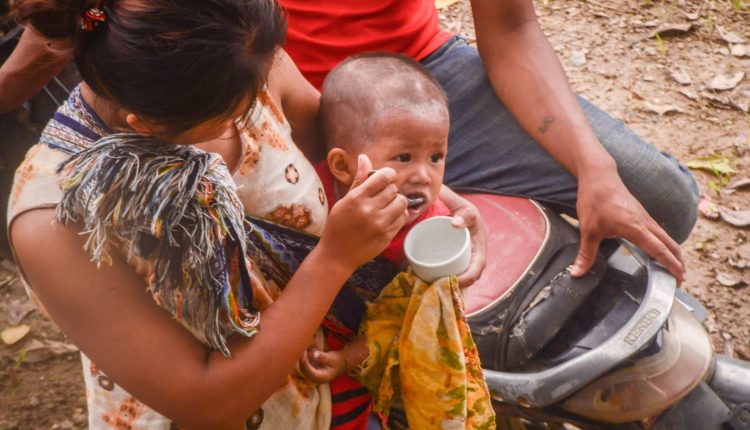 Should one invest and upgrade to iPhone 13? Is the pro worth it? What is the cinematic feature and will it really make the camera great? As soon as Apple CEO, Tim Cook formally unveiled the new iPhone variants, the products have garnered terabytes of press coverage worth billions of dollars. India and Indians too joined the bandwagon. Yes, it is important to search, read and research before making an investment of Rs 80,000 at least, as the iPhone is not just a phone but an asset, at least the owners would like to believe so. However, is affluent India or Assam or Cachar district equally particular about upgrades and downgrades in country’s or state’s or district’s biggest asset – the children?

After 2015-16, the National Family Health Survey, India published its latest findings in NFHS – 5 (2020). The National Family Health Survey (NFHS) is a large-scale, multi-round survey conducted in a representative sample of households throughout India. The NFHS is a collaborative project of the International Institute for Population Sciences(IIPS), Mumbai, India ICF, Calverton, Maryland, USA and the East-West Center, Honolulu, Hawaii, USA. The Ministry of Health and Family Welfare (MOHFW), Government of India, designated IIPS as the nodal agency, responsible for providing coordination and technical guidance for the NFHS.

The brain develops most rapidly in the two years of life, and 90% of the brain development happens by the age of 5 years. Breastfeeding is one of the key determinants of nutrition for kids, and that is an aspect where Cachar finds itself struggling. Only 29.8% of the kids are breastfed within one hour. The number has dropped from 31.2% in 2015. The State’s average is 49.1% according to NFHS-5. 50.8% of the kids are exclusively breastfed in Cachar, an area where the district has improved as it was 28.6% in NFHS-4. However, Cachar is still far behind State-average of 63.6%.

Why is Cachar struggling when it comes to breastfeeding statistics? “The district has problems with anaemia, especially among the tea garden population,” says Keerthi Jalli, deputy commissioner of Cachar. 65.9% of the pregnant women (age 15-49) in Assam are anaemic, according to for NFHS-5. In Cachar, 65.9% of the women population is anaemic, a number that has soared from 46% in 2014-15. 54.2% of pregnant women suffer anaemia in the Cachar district. Malnutrition is another issue behind low breastfeeding, highlights DC Keerthi Jalli.

“We have seen on the field that in multiple cases, the mother is not fit enough for the child-birth. Her body fails to cope up with the process and so, even if she is willing to breastfeed her child, she is not able to. Better family planning, greater community awareness and most importantly dealing with anaemia in the initial six months of pregnancy so that the body is prepared for the last three months when the baby demands a lot, are the solutions to these problems. The focus needs to be on the health of the mother and on-ground monitoring needs to be intensified to garner the health statistics of the pregnant women,” asserts Jalli.

She adds, “The unfortunate issue is that even though they are giving birth to their fourth or fifth child, they do not understand the basic dos and don’ts. Sanitation and hygiene remain a big loss because of which a lot of infections develop in the early days of pregnancy and women fail to breastfeed their children. This is where the triple-A network, Asha, Anganwadi and ANM need to really join hands together to bring in awareness to that mother who is perhaps not in a position to not even absorb the information given to her.”

Joint director of Health Services, Cachar, Dr Ashutosh Barman says awareness is key and if the awareness drives are intensified then Cachar can improve the numbers. “Most mothers are delivering in institutions and that is a great place to generate awareness. The doctors, nurses and others must explain the necessity and importance of breastfeeding,” says Barman.

It is clear that the stakeholders very well understand what needs to be done. But, at the end of the day, it is all about priorities and where kids are on that list.

iPhone is undoubtedly a great invention and it has improved leaps and bounds over the year. That is why it deserves all the attention it gets. Credit to Tim Cook and the brains running it after Steve Jobs died. If Cachar wants to develop scientists or engineers or product designers working at Apple to create the coming upgrades, the district needs to ensure that the kids get adequate nutrients when the brain is developing.