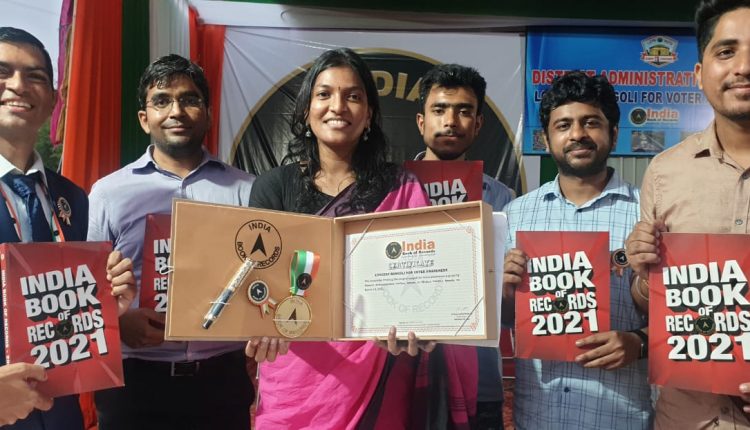 The Cachar district has finally managed to get a place in the India Book of Records. Under the Systematic Voters Education and Electronics Participation (SVEEP), the administration adopted an innovative approach to motivating voters to vote in elections. By painting an 8 km long street-art “alpana”, they intend to convey several messages. However, in doing so, a national record has been set. Within just 24 hours, the district has booked a berth in the India Book of Records by drawing an 8 km long alpana.

The work started from Dolu Point on the highway at 5 pm yesterday, with the 8 km road decorated with various types of street-art. Also, several awareness-raising messages were presented through the art. From college and university students to tea garden workers, police officers, army personnel and DC herself took part in it. Vehicles were moving on one side of the highway and while the other side was being painted. Not only in the Cachar district, but in the whole country no such step has been taken in the past.

The India Book of Records team was led by Jitendra Kuma Jain. “Never before has there been such an initiative to make voters aware. Of course, this initiative has set a national record,” he said. In the coming days, we’ll see if it is setting a record at the international level and will be announced after that. We are currently listing this work in the next year’s edition of the India Book of Records,” said Jain.

The Deputy Commissioner said, “As far as we know, the record for drawing the longest street-Rangoli in India is four kilometres. If it was only for the purpose of breaking the record, it would have been four and a half kilometres. But our main objective is to make people aware and get them involved. From women in the tea-garden area to college and university students, our officials, everyone has spontaneously joined in this work. Many people have even come forward and bought paints, brushes etc. Awareness will also spread through those who are spontaneously joining this initiative. We wanted to make a record so that the news reaches the people faster and they came to vote enthusiastically. We are all proud to set a world record for drawing 8 km long alpana in just 24 hours. In an effort to make voters aware, we are now paying special attention to women, because women empowerment is a priority for us. I am a female Deputy Commissioner and about half of my officers are women. Half of our voters are also women. Hence, inspiring them will also attract others in the family to vote. ”

Election observer Amlan Biswas added, “In addition to conducting the elections smoothly, our responsibility is to attract voters to cast their votes. For this purpose, the administration of the Cachar district has adopted an innovative method that will attract voters not only from this district but also from other districts as well. Since alpana is being painted on one side of the highway, there is a possibility of raising awareness among those passing by the other side. Such a big task is being executed in a well-planned manner. I believe the next election will be similarly disciplined as well.”

As the project was a full success, there was a proud smile visible on the faces of everyone who attended. School-college students gathered to take selfies with the DC and other officials. They also took selfies with happy faces and expressed their gratitude to them. Certificates were then officially handed over to the district administration officials on behalf of the India Book of Records.