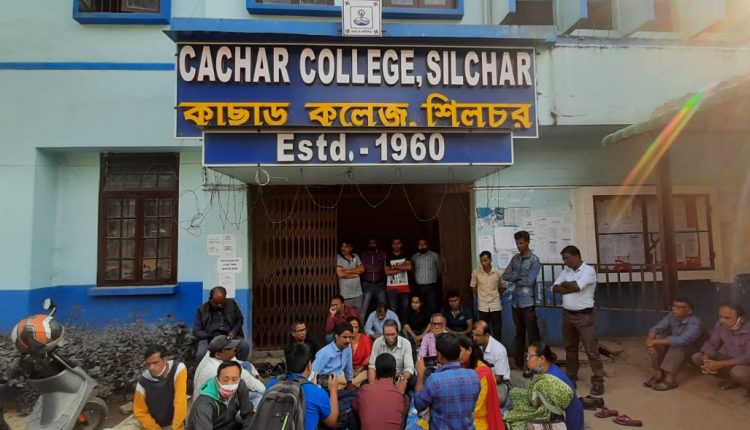 The non-teaching staff of Cachar College withdrew their agitation on Saturday after higher authorities assured action against controversial Political Science teacher Ananda Chandra Ghosh. Apart from this, the governing body has imposed a ban on entry to the professor inside the campus. The college’s Teachers’ Council has also expelled him.

Under these circumstances, the non-teaching staff started agitating from that day demanding the removal of Ananda Ghosh from the college. They complained that Mr. Ghosh was involved in many immoral activities. Besides, he often abused non-teaching staff as well as college teachers. Despite repeated complaints to the higher authorities, no action was taken.

An emergency meeting of the governing body was then called on Saturday. It was decided in the meeting that the proposal that was earlier sent to the Director of Higher Education for the removal or suspension of Mr. Ghosh from the college will be resent. After the decision was made, the President of the Governing Body spoke with the Director. After speaking, it was decided that Ananda Chandra Ghosh would not be allowed to enter the college until due action was taken on behalf of the Director.

Principal Siddhartha Sankar Nath said that the decision was taken to maintain a healthy environment in the college. When asked about the allegation, Ananda Chandra Ghosh said that injustice has been meted out to him.