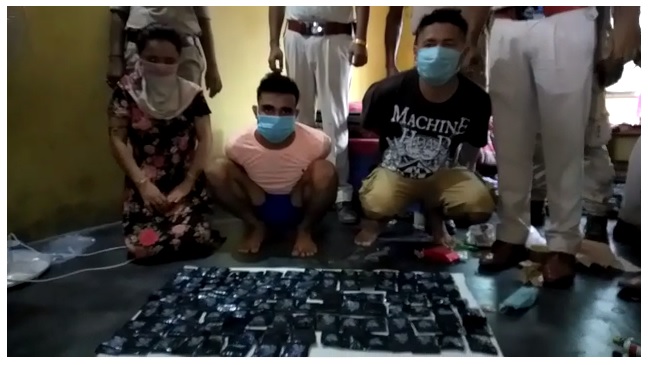 The world might be under a global pandemic but the smugglers are on their duty. Based on a secret tip-off, Silchar Sadar Police Station under the leadership of OC Ditumoni Goswami raided a residence in the Botertal area, Meherpur.

After the raid, the Cachar police officials managed to successfully seize a consignment of Yaba Tablets. Sharing details about the consignment, Police officials informed that there were 100 packets consisting of more than 20,000 tablets worth Rs 15 lakh.

From the spot, the Police detained Sujit Sinha, Kabir Hussain and his wife Salma Begum. The owner of the residence said that Sujit Sinha took the room on rent after the lockdowns were announced. “He said that the has a business of green chilies and ginger. Regularly we have seen consignments coming in which he then transported to Guwahati. We did not have a clue that he is into the smuggling of drugs,” added the owner of the house.

YABA is often known as ‘horse drug’ or WY (World’s Yours) is a popular party drug in South East Asian countries. These tablets are circular in shape and contain a mixture of methamphetamine and caffeine. YABA in the last couple of years became very popular in Northeast, West Bengal, and Bangladesh too.

Tablets containing ephedrine and pseudoephedrine are often illegally transported from places like Gujarat and Himachal Pradesh to Manipur and then smuggled to Myanmar. There the tablets are processed in illegal drug factories and the two components are mixed to create WY (What’s Yours) drug.

Peddler and dealer in Myanmar then smuggle it back to India and other parts of Southeast Asia. WY is a party drug and popular among party-goers and night-life enthusiasts, it is also consumed by mine workers as that helps them work for longer hours.