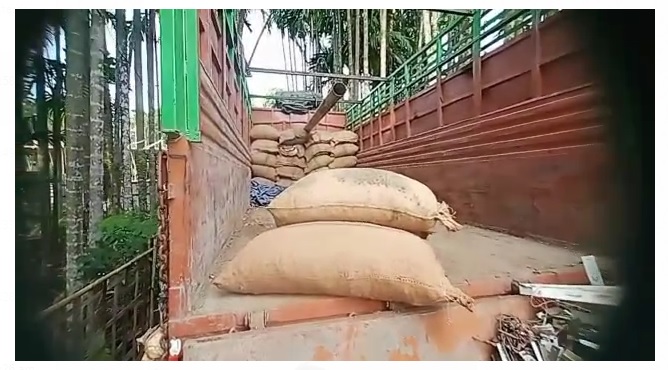 Responding to a secret tip-off, Additional SP of Cachar, Partha Protim Saikia along with OC Sonai, Manoj Rajbongshi conducted a raid at a residence in the Kabuganj area under the Dholai Legislative Assembly constituency. It was the house used by Tajmul Hussain Laskar where he had two trucks parked.

Sonai OC, Manoj Rajbongshi raided the house and detained the trucks. After Additional SP, Saikia reached the spot, the trucks were searched. Tajmul Hussain Laskar said that the trucks MZ 06 A 0623 and MZ02 A 0211 were loaded with scrap. While they were indeed loaded with scrap but only half of it. The remaining half was loaded with sacks filled with imported areca nuts locally known as ‘Burmese Supari’.

The Police officials have confiscated around 240 sacks of imported areca nuts worth around Rs 1.5 crore. Police sources informed that the trucks were loaded in Mizoram and were headed to Guwahati. According to sources, there is a warehouse at Tajmul Hussain’s house where the trucks were supposed to get unloaded. While Tajmul Hussain Laskar and Nazmul Hussain Laskar were unloading the trucks, OC Manoj Rajbangshi and his team managed to catch the culprits red-handed.

The truck driver said he had no clue what was loaded in the truck. “Due to the Covid protocols, we aren’t even allowed to get down. They loaded the truck, covered it and told us that there is scrap and we must drop it in Silchar. We had no clue what the trucks were loaded with,” said the driver.

Additional SP, Partha Protim Saikia said, “We are investigating the matter to find if there are others involved in this crime. So far we have attested two. We had a secret tip-off that there is Burmese Supari kept at a residence in Kabuganj and accordingly we raided the spot. We confiscated the nuts and now after interrogation, we will get to know more about the illegal trade.”

405 sacks of subsidised rice seized from a godown in Cachar; “Stock authentic,…