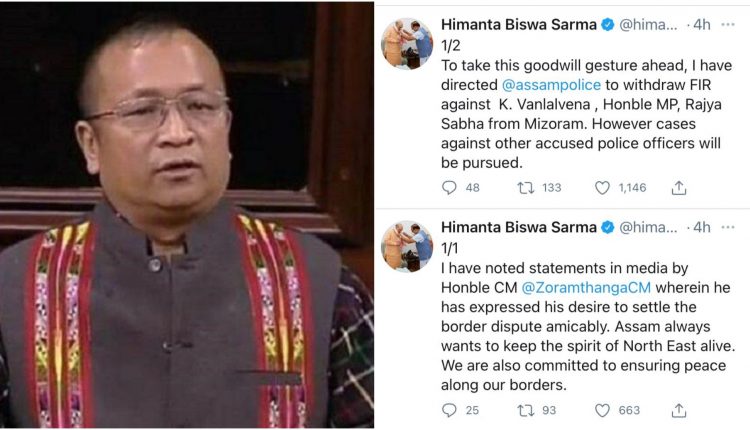 “They are lucky that we have not killed them all. Next time they (Assam Police) come, we shall kill them all.” When the entire Assam was mourning the death of six of its men in uniform, Rajya Sabha MP from Mizoram, K. Vanlalvena gave this statement in an interview with the television channels in Delhi.

Hours after the bite of this interview went viral, Special DGP Assam Police GP Singh announced that an FIR has been lodged against the Rajya Sabha MP and a team of Assam Police including the officers of CID have left for New Delhi to investigate the role K. Vanlalvena played in orchestrating the conspiracy against Assam Government and its Police force as six were killed and around 42 including the SP Cachar were hospitalised. The incident, according to the government documents, occurred within the constitutional boundary of Assam.

Talks between the two states have progressed leaps and bounds. Yesterday, Barak Bulletin reported that Mizoram government has decided to drop Chief Minister of Assam Himanta Biswa Sarma from the investigation. It is worth mentioning here that an FIR was lodged against Sarma for no rhyme or reason.

Reciprocating to the Mizo counterparts’ decision to tone down the FIRs, Sarma also took similar steps. “I have noted statements in media by Honble CM Zoramthanga, wherein he has expressed his desire to settle the border dispute amicably. Assam always wants to keep the spirit of North East alive. We are also committed to ensuring peace along our borders,” tweeted Himanta Biswa Sarma at the stroke of midnight.

He added, “To take this goodwill gesture ahead, I have directed Assam Police to withdraw FIR against K. Vanlalvena , Honble MP, Rajya Sabha from Mizoram. However cases against other accused police officers will be pursued.”

Two days back, in a all-party meeting in Silchar under the chairmanship Minister Ashok Singhal, it was decided that Assam will press charges against K. Vanlalvena as a man of his stature saying “We shall kill them all” directed towards and Police formation of his own country is not acceptable. During the all party briefing, opposition MLAs condemned the words of Vanlalvena and echoed each other that the Police must investigate the role of the Rajya Sabha MP. However, he is all set to be withdrawn from investigation.

What is also worth taking note of, CM Assam Himanta Biswa Sarma never made an insinuating or provocative statement. Even while paying tribute to the martyrs of Assam Police, he maintained, “More of us will die in order to protect our land but we will not open fire at fellow countrymen.” How is him being withdrawn from investigation equal to Assam Police withdrawing FIR against a public representative who spewed venom publicly. How the opposition MLAs react to this decision to withdraw the FIR, also remains to be seen.