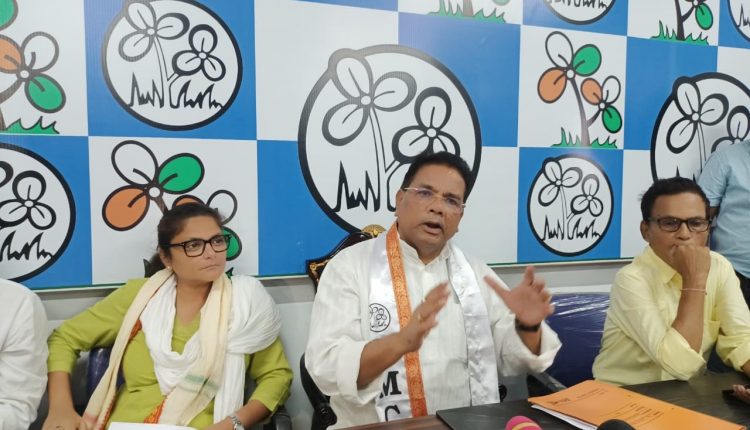 “CM’s decisions regarding the Greenfield Airport has more Math than English”: Sushmita Dev

Over the past few weeks, the debate around the construction of ‘Greenfield Airport’ at the Dolu Tea Estate of Cachar has gathered momentum. Today, All India Trinamool Congress, (AITMC) Assam Unit had organised a press meet which was addressed by TMC’s Assam President Ripun Bora and Rajya Sabha, MP, Sushmita Dev.

Ripun Bora mentioned that among the 21 locations in India, where the proposal for the construction of the Greenfield Airport received by the Civil Aviation Board of India, Dolu or even Cachar district, does not exist.

Sushmita Dev then continued to speak on the topic, and took a jibe at chief minister of Assam, Himanta Biswa Sarma accusing him and his government of illegally unsettling the resident labourers of the estate under the pretext of airport construction. According to her, the Right to Fair Compensation and Right to Transparency are both lost in this act by the State Government, and so she demanded fair and logical explanations.

“Nobody would say no to the idea of a flyover in Silchar. But if the construction involves breaking roads and houses all the way from Central Road to Rangirkhari, that would certainly be a problem’, she says. Using that as an example, Sushmita Dev said that she has written to the Chief Secretary of Assam seeking official documents based on which 3 million tea saplings were uprooted. She warned that if she does not get reasonable responses from DC Cachar and Chief Secretary, Assam, she will drag them to the doorsteps of judiciary.

It is worth mentioning here that in response to Sushmita Dev’s letter, Aviation Minister, Jyotiraditya M Scindia mentioned that the Aviation Department has not received any proposal for construction of Greenfield Airport in Silchar. Dev then questioned the government on its land acquisition process as the journey to construction of Greenfield Airport starts with proposal following which there comes the in-principle approval. Himanta Biswa Sarma, reacted to Sushmita Dev’s allegations by saying, “If someone doesn’t understand English, what is it that we can do…” it was a subtle dig at Dev.

Today, Sushmita Dev addressed the issue and said, “I may not understand English but I understand the math and Himanta Biswa Sarma’s decisions regarding the Greenfield Airport has more math than English.”

Speaking of the CM of Assam, TMC’s State President, Ripun Bora narrates an analysis of the recent accusations, regarding high priced PPE kit buying during the peak COVID era of 2020-21. As per the decision of Ex- Prime Minister Narsima Rao’s cabinet years back, no state or Central Government has the right to involve business deals with family members. However, this rule seems to have escaped the memory of the CM, as investigations show that during the high tide of COVID-19 in 2020, the Assam Government had purchased a huge amount of PPE kits from his wife, Riniki Bhuiya Sarma’s firm, GD industries.

“The real problem arises when the enquiry reveals that instead of the Market Price of Rs 600 the kits were budgeted as 990/- by the Government, more specifically by the then Health Minister, none other than our current CM,” stated Bora.

As a conclusion, the TMC members, who failed to interact in person with the labourers, due to imposition of CrPC 144 in the area, demand legit clarification as a strong Opposition from the CM of Assam, and also mention about writing a complaint to the Parliament, or reaching out to the Higher Judiciaries.