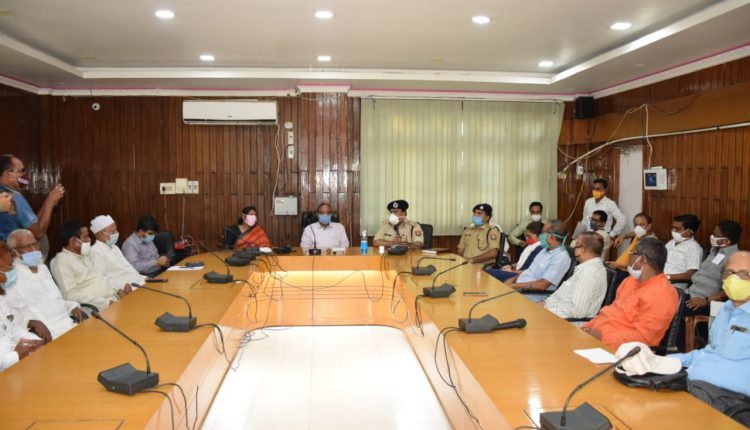 In view of the incident that took place at Malugram’s Ghoniwala area in Silchar town on Sunday last night, various segments of society and representatives of political parties cutting across party lines appealed to help the district administration in restoring peace, and maintaining law and order and communal harmony in the town.

At a meeting convened by the district administration here on Monday, the senior citizens, religious leaders and representatives of political parties resolved to enhance administration-public coordination, quell rumour-mongering and reactivate peace committees for ushering in durable peace and tranquility in society amid the COVID-19 pandemic.

Terming the incident of pelting of stones as the “handiwork of miscreants” to disturb peace in the society, all the participants demanded stern action against the perpetrators who fomented trouble.

The participants thanked the civil and police administrations for taking swift action and preventing the incident from snowballing into a major law and order problem.

Minister for Environment & Forest etc, Parimal Suklabaidya urged the Deputy Commissioner, DIG (Southern Range) and Superintendent of Police to visit the place of the incident once the curfew is lifted to instill confidence among the local people. He demanded strong action against the miscreants as per law and to quell rumours at work.

The Minister said on hearing about the incident, Chief Minister Sarbananda Sonowal rang him up, the DIG and the DC and took stock of the situation and asked them to step up efforts to restore normalcy in the troubled spot.

Suklabaidya also asked the civil and police administrations to keep a tab on the social media and to take necessary action against those posting objectionable posts and spreading misinformation.

Echoing the views of the participants, the Minister asked the DIG and SP to reinforce police personnel at Malugram Police Outpost as the areas under its jurisdiction are quite large.

Suklabaidya exuded optimism that the ceremony associated with the bhoomi pujan of Ram Temple at Ayodhya would pass off smoothly ‘as the social fabric and secular ethos of our country is strong enough’.

Deputy Commissioner, Keerthi Jalli assured that the administration would take stringent action against the culprits for triggering trouble ‘as law will take its own course and in scotching rumours. Jalli said that the Ghoniwala incident that emanated from a trivial issue should not be allowed to recur. While appealing for peace and tranquility, Jalli sought the support and cooperation of everyone in the fight against COVID-19 during the festival times by following all protocols and to ‘ensure that there is no political and religious congregations and assembling of more than five persons as per Government of Assam’s latest guidelines to keep coronavirus at bay’.

Earlier, DIG, Southern Range, Dilip Kumar Dey said the timely action by the police prevented the incident from snowballing into a major law and order problem. Dey said the local people with whom he and SP interacted said the incident should not have happened at all in an area that did not have such a precedent. Dey urged the participants to wean away certain misguided and frustrated youth who are spreading canards and misinformation in society.

Superintendent of Police, Bhanwar Lal Meena urged the people to verify facts with the administration to keep rumours under check. Urging everyone not to take laws into their own hands, Meena said police will take action as per law. He requested everyone present to pass on correct and accurate information for the police to act upon.

Meanwhile, the administration apprehending breach of peace and tranquility, clamped curfew in areas under Malugram Police Outpost with immediate effect.