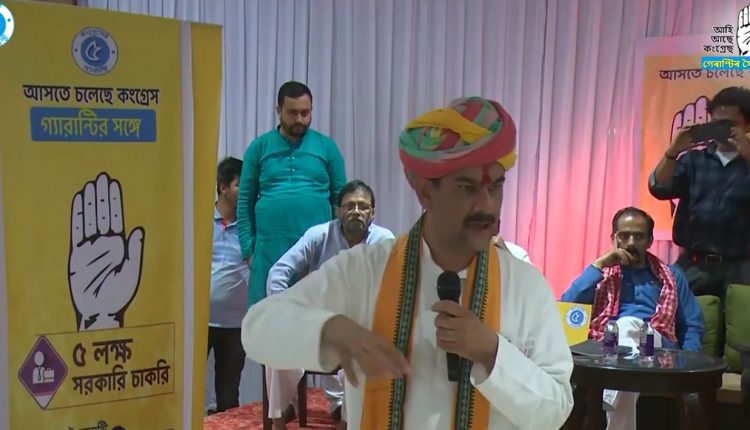 Congress’ Manifesto strikes right chords for the people of Barak Valley, offers stunning silence on the citizenship to immigrants

Congress’ Jan Manifesto strikes all the right chords for the people of Barak Valley, offers stunning silence on the citizenship to immigrants

Congress has recently released its manifesto for the state of Assam. An analysis of the manifesto provides us with five key takeaways –

1) Promise to bring in a law to nullify the effects of CAA.

4) Guarantee of ₹2000/month to every housewife

The manifesto contains a special section on the ‘Development of Barak Valley ‘ . The kitty bag of promises for the people of Barak Valley seems to be based on a thorough brainstorming about the issues which concern us. The key highlights of the Congress’ vision for Barak Valley includes –

• A Cultural Centre will be constructed in the memory of Nobel Prize Awardee Rabindranath Tagore.

• A bench of The Guwahati High Court will be constituted in Barak Valley along with a Justice.

• Super speciality facilities like departments of neurology, neuro surgery and cardiac surgery and a trauma
centre will be established and operationalized in Silchar Medical College and Hospital on an emergency basis.

• A mini Secretariat will be constructed for the Barak Valley area as stated in the 2016 manifesto and will be
completed in five years.

• Strict efforts will be made to complete the East-West Corridor that builds better connectivity between the
Barak and Brahmaputra Valleys.

• Priority will be given to the unemployed youth of the Barak Region in Group Three and Group Four
government jobs.

• Alternate State Highway from Haflong Via Lanka to Guwahati will be developed.

While the manifesto has undeniably captured some of the major issues of the Valley, it’s silence on the plight of the immigrants is disturbing. The Congress has been relying on its prospects of garnering the Anti-CAA votes in Upper Assam so much so that it’s national leaders are addressing rallies with anti-CAA slogans and symbols. However, the Congress seems to be wary of its effect on the electorate of Barak Valley. None of the leaders of the Congress has been providing any clear road map as to what the Congress plans to do with the Bengali speaking immigrants seeking citizenship in India. With only a few days left for the polls, such a duplicity regarding it’s stand on the immigrants may come to haunt the Congress later. Unlike the rest of the country, the anti CAA protests in Assam was driven more by a fear of the immigrants and less by the concerns regarding constitutional commitments. The furore regarding CAA, in the context of Assam, has deeply rooted anxieties of ethnicity and language. Since the Congress has committed itself to nullifying the effects of CAA by bringing in a new law, the stunning silence on the fate of immigrants is disturbing. The Congress must clarify on the following –

1) How do they plan to override a parliament passed law without inviting a constitutional crisis?

2) What do they plan to do with the immigrants seeking citizenship in India?

3) What are they planning to do with the people lodged in the detention camps?

Thus, it is high time that the Congress clears the air regarding the patent duplicity regarding it’s stand on the plight of immigrants.