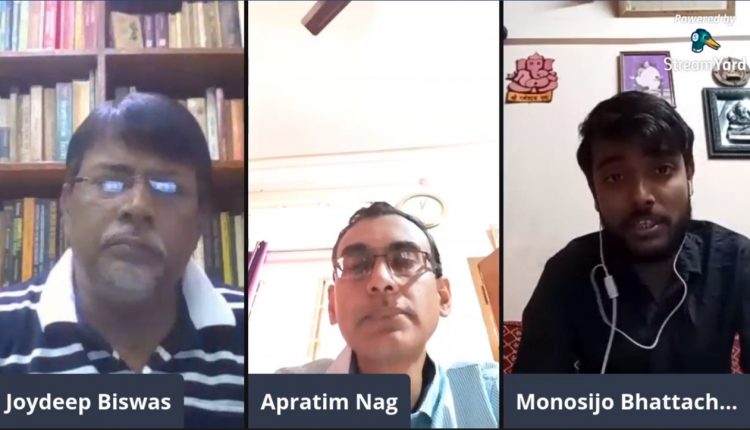 “He who was living is now dead

We who were living are now dying

With a little patience.”

Even after almost a century down the line, T.S. Eliot’s magnum opus seems relevant, given the present state of affairs globally. It is the year 2020, the turn of the decade, which was supposed to bring new hopes and aspirations has indeed brought something new, but dangerous, ‘Coronavirus’. A virus which has spread globally, COVID-19 was declared as a pandemic by World Health Organization on March 11.

Quite naturally, massive new narratives have been created around this and the danger which it contains. The virus has been the center of innumerable discourses but an elaborate discussion on its effects on the socio-economic spectrum of the world, and in India, particularly, is necessary. On that aid, Barak Bulletin came up with a discursive session dedicated to the different facets revolving around the socio-economic effects of COVID-19.

At the midday of April 26, Barak Bulletin conducted a live session on Facebook in the page My Silchar, namely, ‘Corona Conundrum’. The session was moderated by Assam University student Monosijo Bhattacharjee, who is known for his debate and oratory skills. As he himself stated, the session was a discussion on “the issues at hand, the challenges that we face and the future that we are heading to”.

Eminent scholars of the valley Prof. Joydeep Biswas, Associate Professor of Economics in Cachar College, who was nominated by Barak Bulletin as one of the 15 most influential individuals from Barak Valley, owing to his contribution to the expansion of the intellectual culture of the valley along with Dr. Apratim Nag, Assistant Professor of Physics in Gurucharan College, Silchar, an indispensable part of the intellectual milieu of the valley, were the esteemed guests in the session, who shed light on various aspects of the socio-economic impact of COVID-19 in the country, and by enlarge, on the global scale as well.

Corona Conundrum, as aforementioned, was conducted live on Facebook and users were able to send in their questions and opinions on the matter as well, a few of which were answered by the guests of the panel. Monosijo Bhattacharjee divided the discussion into five segments, each carrying an important aspect of the discussion, and the end product provides us ample amount of insights. The session, which streamed for almost an hour and a half long, gave us some crucial takeaways from which we can not only gather knowledge but also ponder over. Let us have a look at the major insights from the discussion.

1. Larger Changing Realities of the World

The first segment, as the title suggests, focused mainly on the global spectrum, on which, the guests provided insightful opinions. Prof. Joydeep Biswas regards the outbreak of the pandemic as “the biggest challenge that the humanity has ever faced”, and that forms the bad part of it. However, he also opines that, on the positive side, the world is fighting back and that the world has learnt quite a number of lessons. He sided with the fact that sovereign boundaries are now more visible and restrictive, and moreover, the federal boundaries, in India, have potentially been acting as sovereign boundaries and the restrictions are getting reduced constantly. Prof. Joydeep Biswas further opined that liberalism, globally, is at stake and on a verge of collapse and COVID-19 has, perhaps, put a final nail on the coffin. In future, we might find a racial profiling and a discrimination between the corona affected people and the ones who are not affected by it. He apprehends the fact that science has taken a front seat in the fight against COVID-19, yet he opined that a belief might be necessary in order to show people the right trajectory and thereby bolster their courage. Overall, the future of the larger reality might provide new kinds of discourses.

Dr. Apratim Nag, shed light on skin hungering and how it is emanating on the pretext of the current scenario of the world. While human intimacy is at stall, the hormonal balance and human relations will undergo a change. According to Dr. Nag, we cannot accept safety at the expense of freedom because it will “degrade us rather than elevating us”(sic.). He, further, nodded to the fact that COVID-19 has indeed shown a mirror to the world. The crisis even in the proclaimed developed countries is by and large apparent, and the funds spent on defense do not serve any purpose. He anticipated that in near future, countries would allocate more funds to the healthcare and education sector. 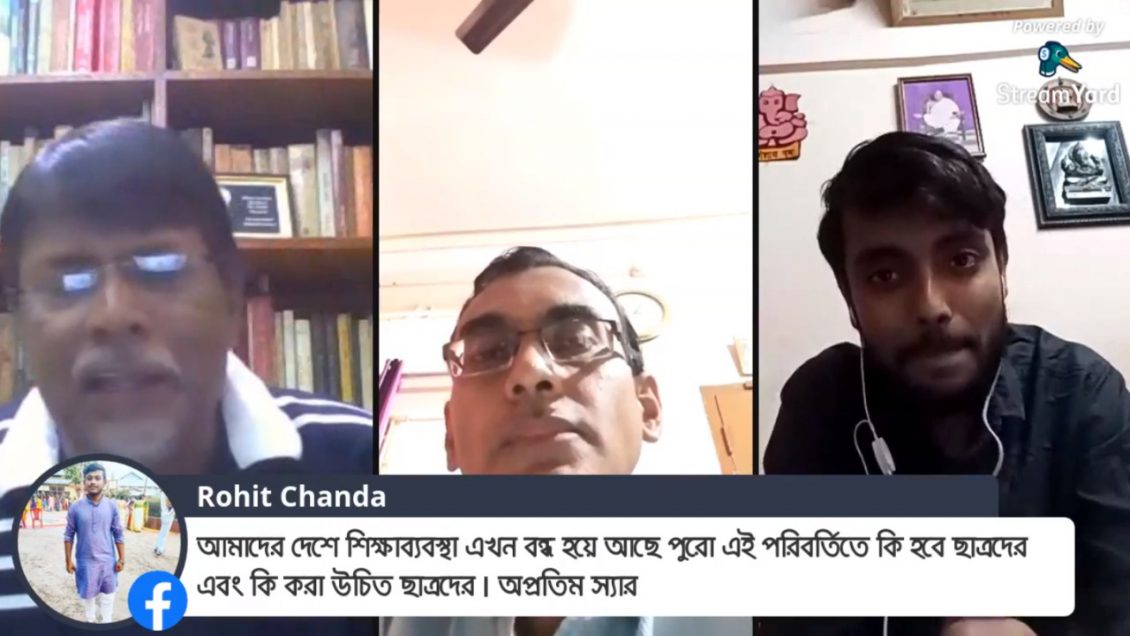 2. What it means for India

There is a hopeful perception on the outbreak of COVID-19 in India by Prof. Joydeep Biswas, and his hope is backed by the numbers. In a populous country like India, one might have anticipated that the virus would spread at a fast pace and the positive cases would increase rapidly. In truth, it is not quite so, especially, in comparison to the occidental countries. The fatalist rate in India, for instance, is lesser than half of the global average. He considers the lockdown to be a timely one, which has made it possible for the slower rate in the outspread of the virus.

In a scenario where India has “entered the battlefield with its hands tied”, Dr. Apratim Nag held an opinion that the way India has fought back is commendable. India has responded promptly with timely ban of exportation of PPEs, and then of ventilators and surgical masks, which Dr. Nag lauded. He felt that given the resources in hand, India has managed to have the optimal use of the equipment available for them.

3. Dangers of Stigmatization that we face

The third segment shifted focus to the social interactions of different scales. We saw, here, that Prof. Joydeep Biswas condemned the identity sentiments, spreading through fake news and links, which are jeopardizing the collective peace. There is a rise of the self and other bifurcation in the country amidst coronavirus. According to Prof. Joydeep Biswas, COVID-19 has taught people to be selfish at a level, as people have practically taken the idea of self safety, thereby forgetting the aspects of compassion and human values. This, further, grows the susceptible attitude of people towards others who have been somewhere involved with coronavirus.

Dr. Apratim Nag reckoned that, for the time being, an integrated world might be active, where people might forget the differences based on caste and creed. In reference to a quote by Daniel Defoe, Dr. Nag anticipated that people might look at the world with ‘different eyes’, devoid of the differences among the people.

One of the major narratives which have been created during the COVID-19 pandemic is that of the future of the economy of the country, and on the global scale at large. Monosijo Bhattacharjee put forth a real, yet grim picture of the effects of lockdown, stating that for an underprivileged person, the lockdown can be disastrous. On this, Dr. Apratim Nag further added that there has been criticism on the government that they are putting health risk before the economic risk. He agreed to the fact that the lockdown would have different impacts for the different sections of people and with the persistence of lockdown; we might have a grim scenario approaching in the future.

On the aspect of Indian economy, Prof. Joydeep Biswas reckoned that the GDP growth of India would certainly fall, as with no production, the GDP cannot possibly rise. With no supply, there is no income being generated and furthermore, no demand as well. In reference to an article by the three most ‘powerful’ economists that India has ever produced, viz., Dr. Amartya Sen, Dr. Abhijit Banerjee and Dr. Raghuram Rajan, titled ‘Huge numbers may be pushed into dire poverty or starvation…we need to secure them’, Prof. Biswas states that the government is ought to prioritize the aspect of starvation, given that India, even prior to the pandemic outbreak, has underwhelming numbers behind it on the hunger index. He also points out that the article also refers to the Food Corporation of India having record volume of food grains in store. However, it is to be seen how the food is being distributed when time demands for it. Further, in a country which was already lagging behind in the unemployment rate, we find a situation where the rate is dropping further in an overwhelming pace. While the dearness allowances are being frozen, the owners of private units are asked not to curtail any part of the salaries of the employees. This, according to Prof. Joydeep Biswas, is sending a wrong signal and is creating confusion. Jobs, thereby, would face a major setback in the future, and the slowdown and lockdown combined, might have a “catastrophic impact” on the employment front of the country. 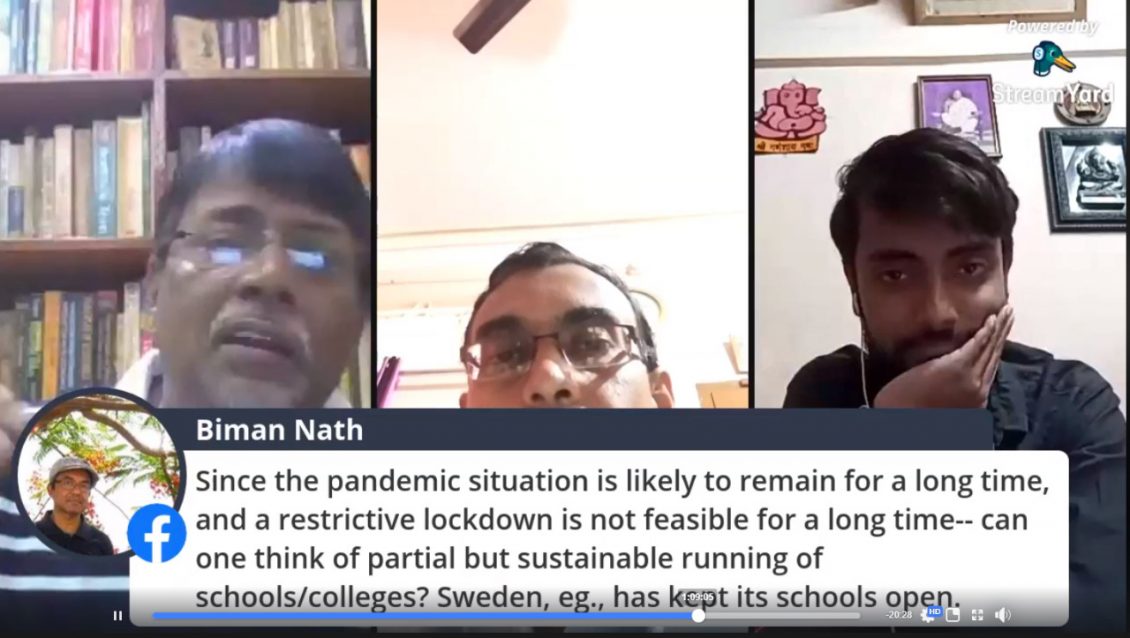 5. Education Sector across the Globe

In a scenario where the world is in a state of rest, a domain which is facing a terrible situation is that of the education sector. Dr. Apratim Nag commented on the fact that albeit the trend of online classes is at rise, the ground reality shows that a massive number of students do not have the luxury of internet at their disposal. Referring to different statistics, he shows that even on the technical front, we find that an overwhelming number of students would not be even able to access the online classes. For instance, he refers to a survey by University of Hyderabad among 2500 students, yielding results that many students would be unable to access the online courses, with causes, such as, unreliable connectivity, unreliable electricity supply and the cost of connection. He also states about the psychological impact of a virtual classroom where two students of two different social classes sit in their respective rooms with an air conditioner in one and thatched roof in the other, interact, thereby creating an obvious distinction. He suggests community radio or televised classrooms as possible solutions. According to him, a virtual classroom can never be as effective as an actual classroom.

The post corona world, according to Prof. Joydeep Biswas, will chart new trajectories in the education sector. In future, “a substantial part of physical teaching might be converted to online teaching”, states Prof. Biswas. The growth of online classrooms might provide new challenges to the stakeholders of actual classrooms in the post corona world. The humanitarian value, he opines, might also face a setback, where an individual is losing relevance to the constructed collective at present as well.

After shedding light to some important peripheral visions of the Corona Conundrum, the panelists answered some questions asked by Facebook users through comments. Discussions based on the future of the students, as well as herd immunity, in addition to the lockdown acting as a rehab surfaced as well. The moderator, Monosijo Bhattacharjee, himself being a student answered a question that indeed the students are uncertain about the future and the roadmap in front of them. While answering a question on whether the donated funds reach the underprivileged people, Dr. Apratim Nag was affirmatively hopeful and he also lauded Dr. Himanta Biswa Sarma for his proactive approach towards the healthcare sector of the state.

The session closed with messages from the esteemed guests, where either of them indicated on the virtue of hope. In a world which is facing a terrible crisis, an existential angst has been brewed and served as well. The COVID-19 pandemic is creating havoc even when I type this, and the future might hold horrors as well. Corona Conundrum was a positive effort to gaze at the probabilities that lies ahead, in rationalities and realities.

Here is the full video: