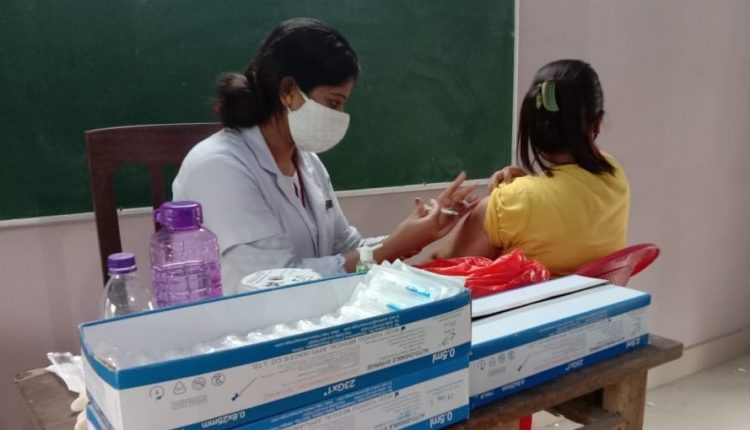 There is a nationwide scarcity of Covaxin doses, more so because the second jab of Bharat Biotech’s vaccine needs to be inoculated within a period of 28-42 days unlike the Serum Institute’s Indian version of Oxford AstraZeneca vaccine Covishield which recommends a dosage regimen of twelve to sixteen weeks as per the newly revised schedule.

In Assam, there are many beneficiaries who have crossed the deadline of 42 days or are nearing the 42nd day. The same is the case in Barak Valley. More than 15,500 jabs of Covaxin have been inoculated in Hailakandi, in Karimganj it is around 16,000 while according to the Cowin website’s Dashboard (8 pm June 8), in Cachar it is 44,554.

Speaking with Barak Bulletin, district immunisation officer, Dr. Sumona Naiding said that the district is waiting for doses from the state. “Once we get the doses, slots will be available for online booking and beneficiaries with their slots booked can get their doses. So far, this is what we know and if the state instructs us to follow some other mode, we will do that” said Dr. Naiding.

Minister of Health and Family Welfare, Government of Assam, Keshab Mahanta in a press conference held a couple of days back informed that the state will now only use Covaxin doses to administer to the ones waiting for their second dose. “We will not administer Covaxin to any new beneficiary, the doses will be saved for those who are partially vaccinated with Covaxin,” the minister said.

During a telephonic conversation with Barak Bulletin, NHM director, Dr. S Lakshmanan said that the state has got 52,000 doses of Covaxin. “We have the data of vaccination. We know in which district, how many beneficiaries are waiting for their second dose of Covaxin. Accordingly, we will distribute the doses to all the districts in Assam. These 52,000 doses are for the entire state,” said Lakshmanan.

Assam has already placed an order for more doses and the consignments are expected to be shipped soon by Bharat Biotech. However, for the time being, Lakshmanan says the state will prioritise those who are nearing the deadline. “We know that the second dose of Covaxin can be administered between 28 and 42 days of the first dose. Now, as we do not have enough doses, if there are two people in the queue and we have one dose of the Covaxin we will give preference to those close to the 42nd day,” the NHM director who has served a tenure as the Deputy Commissioner of Cachar.

Dr. Lakshmanan appealed to the mass for cooperation. “This needs public information, public awareness, and public cooperation. One who has completed 28 days of the first dose is as eligible as the one on the 42nd day, but because we do not have enough doses, we are prioritising those nearing the deadline. This is something that needs to be communicated to the general public and they need to cooperate,” Lakshmanan added.

Out of the 52,000 doses, how many get shipped to Cachar, Hailakandi and Karimganj is something that remains to be seen. The districts in Barak Valley have remained slow in overall vaccination rollout. However, in Cachar, vaccination got intensified after district administration as per the instruction of the Chief Minister, Himanta Biswa Sarma started the ‘Arogya Silchar’ drive. As a part of the drive, a vaccination centre has been opened in all the wards in the Municipality area. Today, according to Cowin, the district has inoculated more than 12,000 doses.

405 sacks of subsidised rice seized from a godown in Cachar; “Stock authentic,…