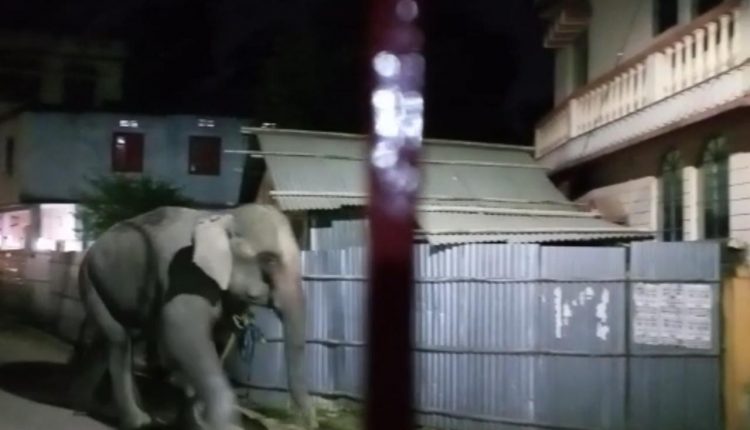 Domesticated elephant in Silchar’s residential areas; Rattled by flashlights and human attention gets lost into jungle

For Silcharians, it was a different event a couple of hours in an otherwise dull cold Monday evening. They spotted an elephant in the residential areas and started following it in herd. Most of them had their smartphone cameras recording the movement of the elephant even though it was not doing anything apart from trying to escape the attention.

The elephant ran through Tarapur, Chamragudam, other parts of Berenga. “It was a domesticated elephant. We have called the owner. Together we are trying to trace it. We believe that elephant has ran into the jungles near Lakhipur area,” said Cachar DFO, Tejas Mariswamy.

As per available information, the elephant was with its mother near a railway track. As the train passed honking, the elephant got scared and ran into the residential areas. While it would have returned to the mother, the already scared calf got rattled by human attention and especially the flashlights. Now, it is missing and at risk of entering another residential area and eventually getting attacked.

The way people chased the elephant and tried to film it, reminds one of a cage in an African zoo. For the freshers, in Lusaca Zambia there is a Zoo that houses one uniquely positioned cage that garners most attention. Outside the cage, it is written “World’s most dangerous animal.”

Tourists across the world enter thinking it could be a snake or a spider or a gigantic tiger, but as they walk in they do not spot any animal but find a mirror where one sees one’s own reflection. The missing elephant has held a mirror for us to see world’s most dangerous animals running with smartphones.