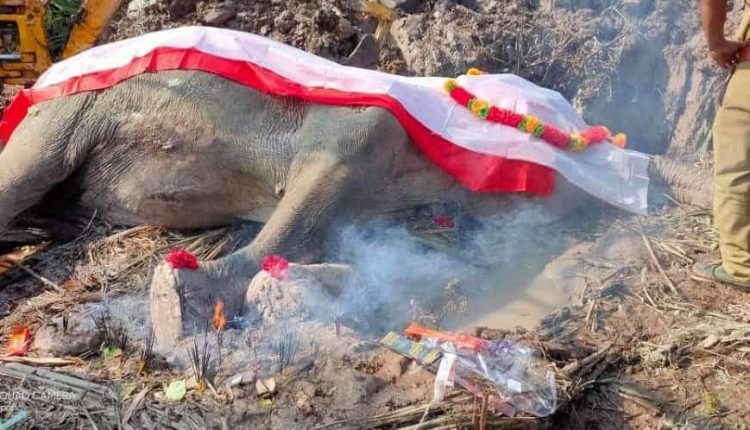 Due to lack of resources and infrastructure, the elephant in Barak Valley dies lying on its stool

The elephant in the news since December 2, 2020, is no more. The forest official declared it dead today. Yesterday it had slipped into coma and was lying isolated in the jungle.

On December 2, 2020, the people of Putni Tea Estate in Patherkandi noticed an elephant in the village with settlements of human beings. The elephant was unwell and it was brought to the notice of the Forest Department and the Forest and Environment Minister of Assam Parimal Suklabaidya.

In fact, the minister himself responded to one of the tweets and informed that he will speak with the concerned department to ensure the elephant is looked after.

Separated from its pack with a chronic indigestion problem, the elephant’s condition deteriorated day by day. It got irked by the human interventions and was unable to digest anything apart from bananas. In search of the fruit, it kept getting close to the dwellings. Last week, a 40-year-old specially-abled man came under its attack and was killed.

The local forest officials tried to administer antibiotics and that somewhat improved the condition of the animal but it needed expert attention. “Yesterday, the elephant fell into a ditch. We also saw that the animal had an episode of loose motion. We tried to give it more medication but it was not responding. Today morning, we were informed by the villagers that the animal is no more,” said Dibyajyoti Nath, forest ranger in the division.

The experts were finally about to reach today evening, but DFO Jainul Ali informed them in the morning that there is no point as the elephant is dead. The experts could not reach earlier as they were busy attending another emergency case in Upper Assam.

Such is the fate of the elephant that it died lying on its stool because of lack of attention. The department did not have enough resources or necessary equipment to lift the elephant from the ditch.

Kaushik Rai says he wants to create history in Lakhipur; What’s next for…