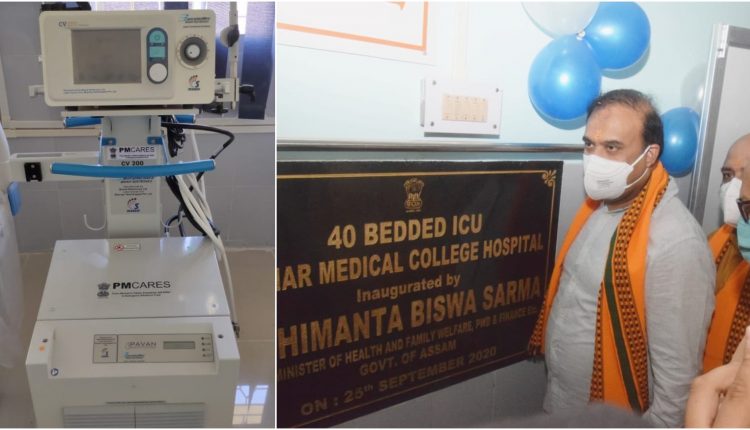 Even if “PM Cares” local MPs and MLAs don’t for sure; 70 ventilators are getting wasted in Barak Valley

The devastation is on the front page of all regional, national and international newspapers. The Guardian called it India’s “descent to a COVID hell,” while The New York Times’ front page on Sunday was filled with grim pictures from crematoriums and graveyards questioning India’s official death count. Weekly newspaper, The Economist termed it a catastrophe.

There is no defending that the country has been hit like a Tsunami by the new variant of the coronavirus which is far more virulent than the previous ones. India is reporting almost half of the total number of cases in the world on a daily basis. The high number of symptomatic cases have choked the healthcare facilities and even the fancy-up-market hospitals in Mumbai and Delhi are finding it difficult to supply necessary oxygen. There is a shortage of Remdesivr – the antiviral drug considered effective against coronavirus. Overall, it is a gloomy, dark, overcast summer that India is staring at. One could see the dementors, but in the case of coronavirus, the danger is invisible, and so far invincible.

The picture in Assam and Barak Valley is yet to get as devastating as the central parts of the country, it needs no telling that we are catching up. Barak Valley has reported more than 100 COVID cases for the second consecutive day, while more than 200 people have tested positive in Cachar alone in the last couple of days. With the domestic flights operational, the numbers will go up for sure. The deputy commissioner of Cachar has called for a meeting with the owners of nursing homes and private hospitals to ramp up the number of beds. So, we know there is a Tsunami that has hit the country and the forecast says it’s fast approaching Barak Valley. How prepared are we?

The answer is simple and irritating. We are as prepared as we were a year ago. It is the same grim story just a different year. Silchar Medical College and Hospital is the only facility with capabilities of treating symptomatic patients in Cachar, Karimganj, Hailakandi, and parts of Dima Hasao as it was in 2020.

Silchar Medical College and Hospital itself remains chocked for most parts of the year due to high admission of general and surgical patients. Hundreds die without even getting life support. The ventilators are forever engaged. And all that is when there is no pandemic. Considering the rapid growth in the number of COVID cases, the SMCH management has decided to earmark the new 40-bed Intensive Care Unit for COVID-19 patients.

The new ICU was inaugurated by the Health and PWD minister of Assam, Himanta Biswa Sarma in September 2020. While inaugurating it, with Silchar MP Dr. Rajdeep Roy, MLA Dilip Paul, DC Keerthi Jalli, Principal Dr. Babul Bezbaruah on the stage, he promised to add 60 more beds to it by January 2021. By then, consignments of ventilators shipped by “PM Cares” had reached Cachar, Karimganj and Hailakandi.

After making the announcement, Himanta Biswa Sarma said, “I have done my job as a PWD minister by sanctioning the project. Now if it is not implemented, you must hold the local MPs and MLAs responsible.” He had not only said it for the ICU but also in the context of the construction of roads. “By spending 50 lakhs we get a good road in Guwahati but not in Silchar,” Sarma added.

A senior official of the Silchar Medical College and Hospital informed that 40 out of the 70 ventilators sent by “PM Cares” are operational at this stage. 30 ventilators will be used in the new ICU that Himanta Biswa Sarma said will be operational by May 2.

In Karimganj district, all 20 ventilators are kept in storage. PWD was trusted with the task of building an ICU in the district hospital. The work had started but was stopped unceremoniously. A senior official in the health department says the hospital management was clueless as to why the construction work got stopped and was surprised how nobody raised a question. “The media didn’t cover it back then either. It is only when being hit by a disaster we care about the healthcare facilities. The ICU was a work in progress last year and today too it is a work in progress,” said the healthcare worker of the district.

The joint director of health, Dr.Anup Kr. Daitary added that the work has started again and they are hopeful that it will be ready soon. He informed that the district hospital appointed specialists and technicians to handle the ICU but because the ICU is not ready, the new joiners are rendering service at Silchar Medical College and Hospital.

Hailakandi’s 20 ventilators are “well packed” in fact, they are yet to be unboxed. DC Megh Nidhi Dahal informed that the existing structure of the Civil Hospital could not support the ICU and so they had to demolish a unit and re-construct it. Thus the delay in installations. He said, in another five months’ time, the ICU is likely to get ready.

Like last year, this year too the district hospitals will do very little to support the chocking Silchar Medical College and Hospital. The doctors and SMCH management will be questioned and MPs like Rajdeep Roy will say on record that “Silchar Medical College and Hospital is not a five-star hotel.” At the end of the day, somebody needs to ask, when there are hundreds dying in the country because of the shortage of ventilators, is it fair that Barak Valley is wasting them.

Silchar Medical College and Hospital does not have a magic wand that would cure patients without resources but with spells. Last year, many patients died because they were brought to the SMCH in the eleventh hour. ICUs in Karimganj and Hailakandi can save those patients. It can also help SMCH in distributing its resources for COVID and non-COVID treatment. After all, COVID is not the only disease killing people.

So, as stated by the Health and PWD Minister, Himanta Biswa Sarma, the PWD department did its job by sanctioning the project to ramp up ICU beds in Barak Valley. The “PM Cares” fund cared enough to send 110 ventilators, but the local MPs and MLAs did not bother to see if the ventilators got installed.

In the case of Silchar, the MLA has been suspended by the party and the MP is busy posing for the advertisements of a hospital he co-owns. The opposition, on the other hand, is at a sanitised resort unavailable for any questioning. That is how much our local leaders care about ICUs and ventilators. 40 installed and 70 are lying uninstalled depreciating every day. That is how prepared Barak Valley is to combat the Tsunami if it hits.