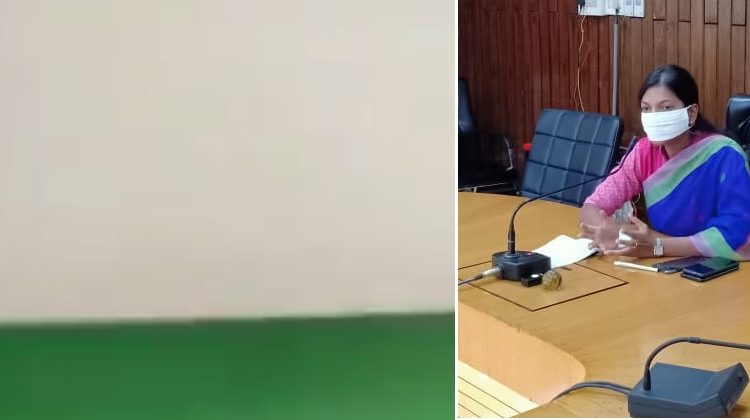 Filming a lady cashier inside the bank, then making it viral, then an action followed by press release: Raises many questions

Recently, a video surfaced on social media which features a lady employee in a bank sitting at her cash counter. After reading only this much, it should strike in your mind that how can someone film a cashier inside the bank. Mind you, the general rule of “You can shoot, what you can see” is not applicable inside the banks as it is a restricted area.

Enough of building it up. In the 25-second clip that has been shared hundreds of times, it is seen that the lady employee is sitting at her cubicle barricaded by the glass. In the video, we do not see any employee sitting around her, nor do we see her attending any customer. While she was busy doing whatever she is paid to do, she noticed a man filming her. She asks, what happened, the male voice from behind the scene counter questions “where is your mask?” The lady rightfully responds with another counter-question, “Who are you to ask me about my mask?” The male voice goes on, “Do you even know what is going on outside?” The lady, again rightfully calls for help and the video ends.

This video has gone viral, the banker and the banking fraternity has been abused left, right and centre. Now, to the male who did not even bother to show his face but revealed the employee’s, must be asked shouldn’t he be grateful to the woman who is braving the virus and doing her duty? Given, he knows what is happening outside, should we not appreciate the people who are responsibly keeping the banking system up and running even if that means interacting with people and handling physical cash? However, such social policing or vigilantism is a common phenomenon in Barak Valley and happens every now and then. What comes as a surprise is a press statement from the office of the Deputy Director, Information and Public Relations within a few hours after the video went viral.

The statement reads, “Lead District Manager, Cachar has asked the Branch Manager of Punjab National Bank, Hospital Road Branch, Silchar to take action against an employee of its branch for violation of COVID-19 protocols.”

While the deputy commissioner is well within her rights to ask the LDM to take action against a bank employee, what comes as puzzling is that the press statement says nothing about the vigilantism. To police someone and be the custodian of law and order in the district one needs a lot of education to crack difficult examinations. Will this press statement not encourage social policing? Was it right for the man to not show his face but breach the modesty of the lady employee? Was he right to presume that the lady is breaking a law? What if the lady has a breathing problem and after hours of duty, she removed the mask for a few seconds to breathe in fresh air while she was all alone? Lastly, will the deputy commissioner allow vigilantes to walk in with their cameras on and film each and every employee without prior intimation?

While action against an employee of a nationalised bank for not following, or to be more appropriate, ‘allegedly’ not following COVID19 protocol is a welcome move. The Prime Minister himself said, ‘Jaan Hai Toh Jahaan Hai’ and to remain alive one must follow the protocol. But why the press release? Will the DDIPIR send a press release when the deputy commissioner orders an internal probe. The DDIPR did not send any press release when the Additional Deputy Commissioner’s wife had lodged a complaint to the DC against her own husband?

Disclaimer, it is not known if the DC herself ordered the press release, but we can “presume” that the DDIPR won’t send a release involving the DC without her approval. Without going into the nuances of administrative functionalities and who reports to whom, the point is, was the lady a criminal at all and who probed it that she is being subjected to public abuse, name-calling and now a departmental probe.

Mask is indeed a shield, but it is an irritating one. Take a walk in any office where the warriors leading India in this battle against the pandemic, you will find many officers, staff irritated by the mask putting it off for a while to breathe in some fresh air. If it is a violation of the COVID protocol action is necessary, but shouldn’t it be kept discreet? We all know about the saying,  Again, it is the prerogative of DC to decide the sort of action she wants to take and if she wants to make it public or keep it confidential.

However, since this statement by the DDIPR was issued on the basis of a social media post, why not screen a few other posts published in the last 10 days and then raise this question, will the administration take action against them and more importantly, will the DDIPR send a press release informing that the deputy commissioner has asked for a probe? Time will tell, for now, go through the images, just to let you know, we have not snooped in with a hidden camera to click these images you will see, all of them are available on the official Facebook Page of Cachar District Administration: Check them:

We are not alleging that someone is breaking the law, we are just pointing it out, that people do remove mask occasionally

Here is another example, we can see the person right next to the deputy commissioner has removed his mask. Again, we are not alleging that he is breaking the law, the point is if he can remove his mask for a brief period in the crowded conference room at DC’s office, can’t the banker lady do the same in her own cubicle. 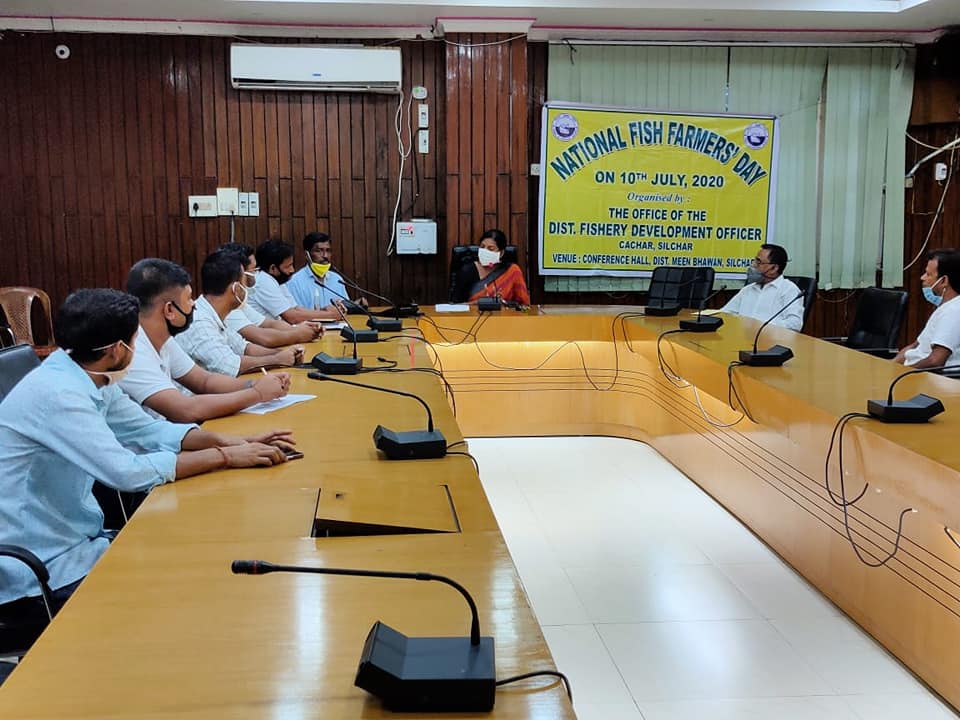 There are more. Spot the AC and the clock, then look down and then a little left, you will see the man wearing a black shirt has his finger in his mouth. His nose is not covered either. Again, maybe he has sanitised his hands and it is safe, we are not alleging that he is breaking the law but saying that the banker lady might have also done the same. 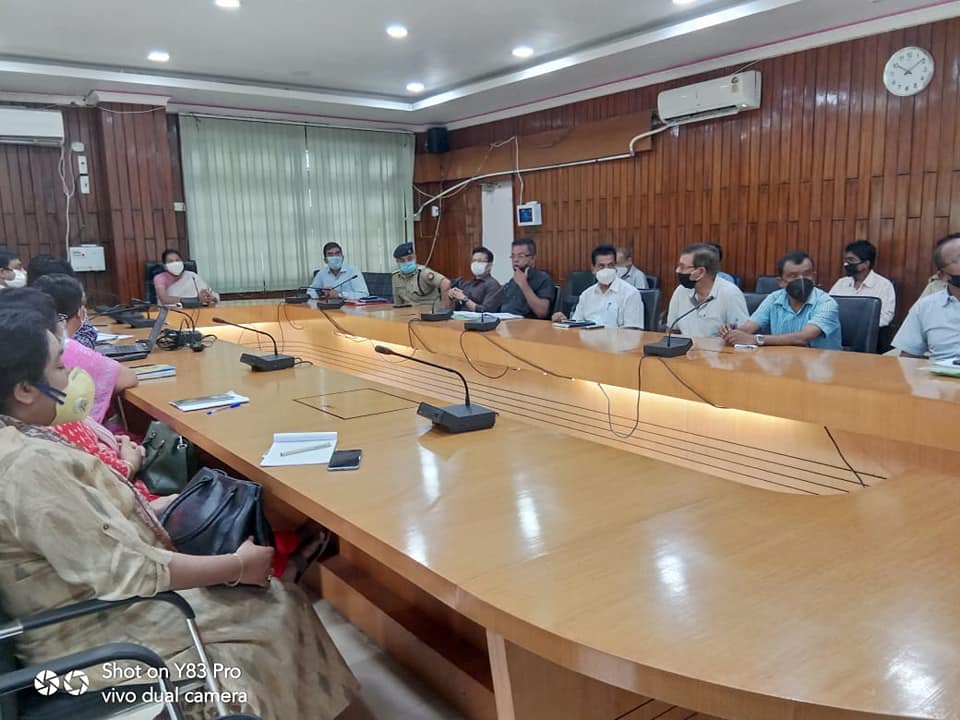 Enough of random, unknown people. Here we can spot the minister of state, Health and Family Welfare at the deputy commissioner’s conference hall. Now look extreme right, in the corner, you will find that the Katigorah MLA’s mask is on his chin, leaving the nose exposed. Again, not alleging any violation, maybe he was feeling claustrophobic and wanted to inhale free air, but then the lady at the bank could have been going through the same.

Not sure if he is the Katigorah MLA? Wait, there is a clearer view

It is not just inside the conference room. Check this out. The deputy commissioner visited an establishment to check if this could be converted to a makeshift hospital. Look right at the centre of the frame, you see a man in spectacles, look at his mask, he is almost eating it. Again, he could have got tired after hours of hard work and might have slipped his mask down to breathe. But the same could have happened to the lady in the bank.

Last one. Look at the man sitting on the chair next to the deputy commissioner. You can see his nose, his mouth and then look around at the people in robe they have slipped their masks too. 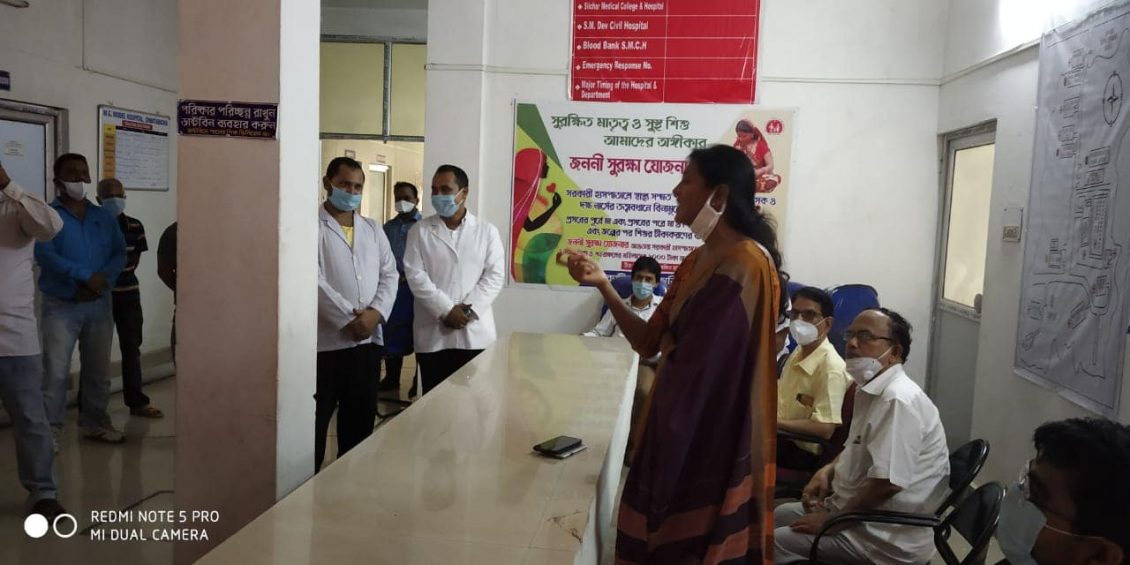 The point is all those who are in essential services are warriors in our war against the invisible, and so far invincible enemy. No point filming them while they are working in their own cubicle. Even if there is a probe ordered against the lady, did it really warrant a press statement that is certain to malign her reputation? If officials in DC Office and hospital doing an essential service, so are the bankers in the banks.

It is a “Happy Republic Day” for them too, but where are they?

Public representatives’ silence is fueling vigilantism in Silchar and next…