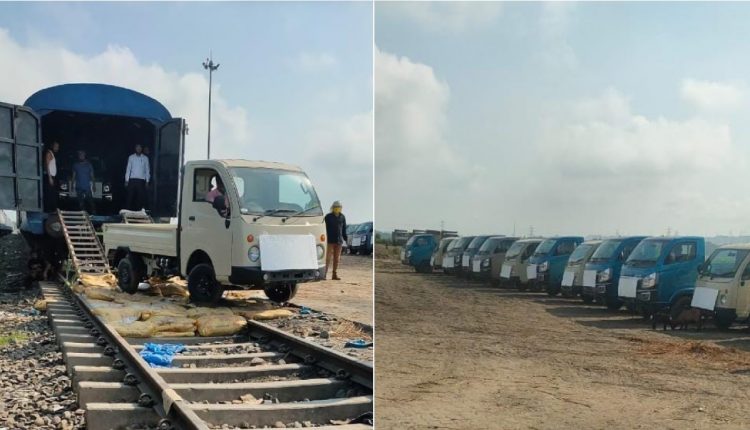 In a significant development and also for the first time in Barak valley, an NMG rake consisting of 10 coaches, carrying 50 vehicles were unloaded at the Salchapra yard of Cachar district on Thursday.  The train carrying the shipment came from Haldi road station in Uttarakhand of Northeastern Railway and reached Salchapra on Thursday morning.

“It is an exuberant moment for us as yearlong efforts and rounds of discussions and planning has finally brought cheerful results. For operating such rakes, it needs a dedicated infrastructure. We have this in Tripura state but for Salchapra it is new” said Badarpur Railway Area Manager S Umesh.

The NMG wagons are the ICF wagons of age older than 20 – 21 years which have been modified to facilitate easy movement of automobile goods. One full NMG rake contains 25 coaches.

The official informed the end Ramp (for Unloading) was not available at the Salchapra yard and the creation of a concrete one would have increased the operational constraints. “So we convinced them (vehicle manufacturers) to use portable ramps instead, during a joint survey by manufacturer representatives and railway staffs on the ground.”

Out of the total 25 coaches departed from Uttarakhand, 15 were detached in Changsari station of Assam and rest 10 were brought to Salchapra.

In Barak Valley, till now, the vehicles were brought by either driving in convoys or ferrying upon trucks. With the successful running of this train, manufactures can now see a better and cheaper transportation option, the benefits of which can be passed on to the end-users.

“Use of rail for such transportation will not only reduce costs but will also save time for the manufacturers. Moreover, shipping in bulk is more viable than those in smaller quantities” S Umesh opined.

It can be mentioned here that, since the lockdown, the Indian Railways is targeting to increase its share in the transportation of miscellaneous non-bulk goods. This traffic — which is very large in volume — is being traditionally moved by the road sector. The Railways is planning to attract traffic from this sector to improve its freight-loading scenario.

Various new locations and stations have already been opened for freight booking and loading and unloading for the benefit of small traders under the NFR areas and for the benefit of the local economy. This has become necessary because of the changing business scenario in the country in view of the COVID-19 pandemic.

Salchapra station plays an important role in Barak Valley in housing the railway transported goods and hence railways is mulling for capacity building of the goods yard of the station. “We have taken up some projects and once it’s completed, hope a larger number of rakes can be unloaded per day as compared to the present scenario,” said the official.