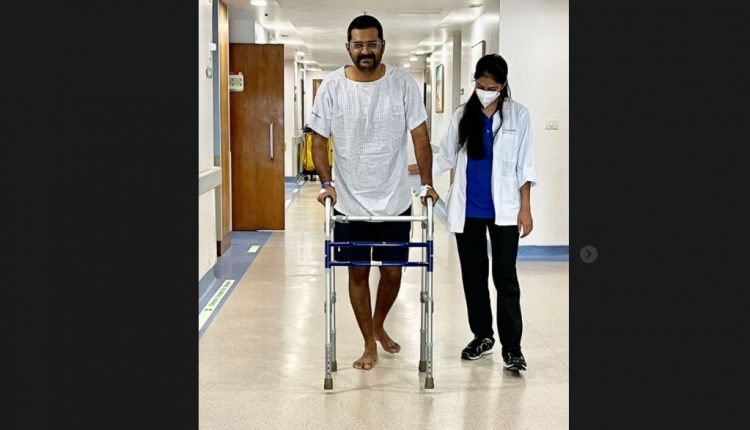 Former Cachar SP Vaibhav Nimbalkar back on his feet after being shot by Mizo forces; “Bullet Shrapnel still inside”

On July 26, 2021, IPS Vaibhav Chandrakant Nimbalkar was at the Assam – Mizoram border when the Mizo forces opened up. Then Superintendent of Police, Cachar – Nimbalkar was standing next to the bus with his fellow men in uniform. First stones, then tear gas, and then the Light Machine Gun burst, it was clear that the Mizo forces were firing for the lives of men wearing Assam Police’s uniform.

The operation to claim a post three kilometers within the constitutional boundary of Assam was headed by IG Assam Police, Anurag Agarwal. When Vanalfaka Ralte, SP Kolashib visited the post to engage in a dialogue, instead of SP Cachar, Agarwal himself sat with Ralte. That caught many by surprise as an SP must discuss the matter with another SP and not an IG sitting few ranks higher.

Though Vaibhav Nimbalkar had chest armor on, he got caught in the blitzkrieg launched by the Mizo forces for a dominant hilltop position. His Private Security Officer, Liton Suklabaidya lost his life in the line of fire. Nimbalkar had a massive fracture in his femur bone and was rushed to Silchar Medical College and Hospital in immense pain after getting a shot on his leg. He was later airlifted to Mumbai and admitted to Kokilaben Hospital in Andheri West.

After undergoing multiple surgeries, Nimbalkar is back on his feet. His wife, Anuja Vaibhav uploaded an image of him taking baby steps towards normalcy albeit with the support of a walker. Sources close to the Nimbalkar family informed that in the last surgery, the femur has been fixed with femoral nails and screws. However, Bullet shrapnels (small dots and one larger piece) are still visible though. “Those couldn’t be removed as doctors would have had to dissect elsewhere.”

“Progress is very good. He has been standing on his feet and taking a few steps also with the help of a walker. The focus for the next few days will be on physiotherapy and rehabilitation,” added the family source.

After he was shot, the Assam Government transferred Ramandeep Kaur to Silchar as the Superintendent of Police. Before Cachar, she was the SP of Hailakandi district.