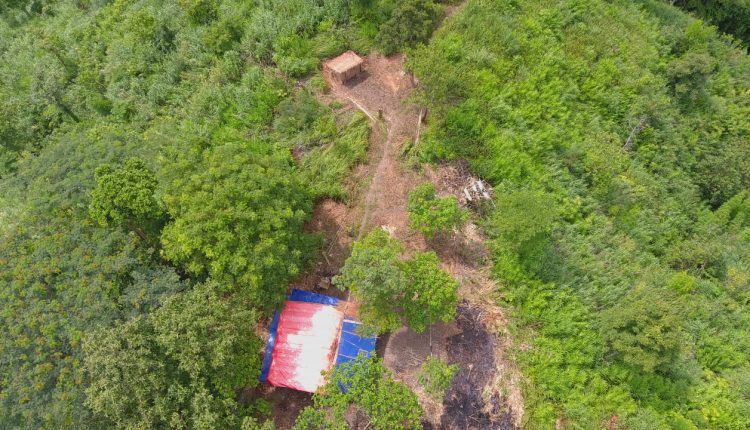 From constructing roads and bunkers illegally to calling Assam Police “thieves”, “Kidnappers”, How Mizoram is waging a war in Hailakandi

Yesterday, the deputy commissioner of Kolasib district, Dr. H Lalnthlangliana wrote his counterparts in Hailakandi, Rohan Jha (IAS). In this letter, DC Kolasib accuses Haialkandi Police of kidnapping. This comes just a week after he accused the same Police transformation of being “thieves” and stealing construction goods.

Dr. H Lalnthlangliana states in his letter, “It has been brought to my notice based on a reliable report that this afternoon at Aitlang in Pu Lalngaisanga’s land where road construction connecting jhum land is undertaken by the farmers using Excavator JCB Reg. No. MZ05 A 4464, Assam Police went to disrupt their activity and damaged the door of Excavator and snatched the keys from the JCB operator Pu Lalnarammawia.”

The letter adds, “Further, the JCB operator was blindfolded and kidnapped with a gun pointed to his head by the Assam Police wearing Commando uniform. He was then dragged by the river, ripped off his clothes and threatened for his life. His mobile Phone along with JCB keys was taken by the Assam Police.”

He almost goes on to threaten, “This is considered a very serious issue and a huge setback towards the initiatives for peace until now; and can further aggravate using forces between the deployed forces around this area.”

SP Hailakandi Gaurav Upadhyay, who himself trekked miles to inspect the interstate borders that the district shares with Mizoram, rubbishes the allegation pressed by the deputy commissioner of Kolasib. “On August 26, Mizoram constructed two new BOPs (Border Out Posts) in the southern side of Assam’s Dholaikhal camp within the constitutional boundaries of Assam. This was in itself in contravention of all agreements between two states,” shares Upadhyay.

He adds, “DC Hailakandi and myself wrote to our respective counterparts objecting the same and requesting the Kolasib administration to withdraw these posts but they never replied or complied. On 01.09.21 it was reported from the Dholaikhal camp of Assam Police that Mizoram had started constructing roads to these unauthorised and illegal posts.”

Reacting to the report, Assam Police parties went and objected to the construction after which the construction stopped. “The allegations of assault, kidnapping and taking away keys mobile of driver etc. are completely baseless and figments of their imagination. A normal police intervention on something illegal is being hyperventilated into some issue which is far from reality and a lame attempt to divert attention from the main issue that is illegal constructions by Mizoram Police and the public in Assam land, that too in a time when the situation is tensed,” asserts SP Hailakandi, Gaurav Upadhyay.

DC Hailakandi, Rohan Jha also wrote to the deputy commissioner Kolasib district yesterday. At the outset, he reminded his counterpart that on August 27, 2021, he was to dismantle the two camps and one bunker, set up by the Mizoram Police on the 26th of August, 2021 in Inner Line Reserve Forest, at the Kachurthal Balicherra area. “But no action has been taken from your end to deescalate the issue. It came to the notice today, that a new camp and a road was being built by Mizoram Police at Kachurthal Balicherra area, in the Inner line Reserve Forest, Hailakandi, within the constitutional boundary of Assam. Such instances of construction and force deployment inside the constitutional boundary of Assam are in clear violation of the Joint Statement issued by both the governments on the 5th of August and are very detrimental in the peacekeeping efforts along the interstate border.”

Jha puts on record that Assam Forest staff along with the Assam Police went to the Kachurthal Balicherra area and noticed that a road was being constructed inside the constitutional boundary of Assam and instructed the driver to stop the construction and immediately return to Mizoram. “Assam police informed the Mizoram resident that he has trespassed into the land of Assam and he shall be arrested under relevant sections of CrPC, if the construction is not stopped. The driver immediately stopped the construction and on fear of arrest, went back to Kolasib district,” writes Jha in his letter.

Responding to the allegations of kidnapping, Jha asserts, “It may be brought to your kind notice that, as alleged by your good self, there was no illegal act done by the Assam Police, but it was a routine intervention to stop illegal encroachment within the constitutional boundary of Assam. The allegations mentioned in your letter are baseless and fictitious.”

Reiterating his earlier letters to DC Kolasib, Jha “once again requested” his counterparts to dismantle the 2 camps and 1 bunker built on the 26th of August, the camp built on 2nd of September, 2021. He has also urged the DC Kolasib to order the Mizoram Police deployed at these illegally constructed camps to return to Kolasib district and not to undertake any fresh construction in the bordering areas to avoid law and order situation in the interstate border areas. “Further, the Jhum farmers residing in the inter border areas in Kolasib district must be counselled and instructed by your good office, not to start any new construction within the constitutional boundary of Assam in the inter-state border area,” concluded Jha after seeking cooperation.

On July 26, after similar episodes of confrontation between the forces of the two states, the fire was opened in Cachar’s Lailapur. Mizo forces took geographical advantage and remained hidden at hilltop holding position to unleash a lethal blitzkrieg. They did so while their SP was sitting in Assam with IG Assam Police as the latter attempted to broker peace through dialogue. Much like an organised backstabbing, the Mizo Forces aimed at Assam Police personal leaving six dead and at least 43 hospitalised with bullet injuries. Since then, Mizoram Police shielded by armed civilians made several attempts to escalate tension on all borders it shares with Assam. In Cachar, they threaten Assam’s officials, workers and forces with guns and slingshots while in Hailakandi, they provoke by questioning the integrity of the Police.

All of this is done by a Force that openly celebrated the murder of six countrymen within India on July 26. Not only that, Mizoram’s lawmakers defended the act of shooting at Assam Police personal and the on-camera celebrations that followed. While the matter is highly political and the dispute is between three allies – Central and two State Governments, the conflict is left to the DCs and SPs to settle at gunpoint.