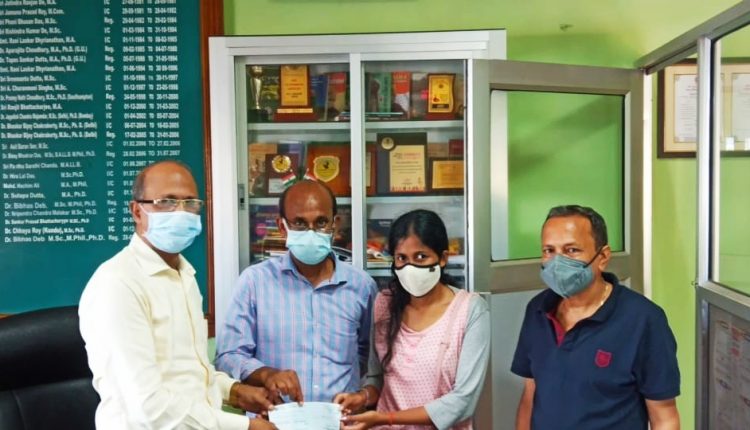 In the last month of August, Barak Bulletin narrated the story of Cachar district’s star cricketer Raju Das who had to sell off his scooter to afford his shoulder surgery in Patna. Marred by financial restrictions, Raju had to work as a delivery person in a local gas agency just to feed his stomach and support his family during the pandemic, as reported on June 29 by Barak Bulletin. After much struggle, Raju Das managed to travel to Patna for his shoulder surgery, following which he was recommended by the doctor for rehabilitation.

Today, Silchar’s Guru Charan College, the alma mater of cricketer Raju Das, donated Rs 20,000 for the cause of his further treatment to recovery. A cheque of Rs 20,000 was handed over to Raju’s sister Rishita Das on Monday by the college Principal Dr Bibhas Deb. Raju, while studying at the GC College, had represented the college in the Inter-University tournament. In 2015, he led his college to the final of the tournament and came out victorious while also grabbing the Man of the Match award.

Today, the cheque was handed over to Raju’s sister in presence of a teaching member of the Teachers’ Representative to the Governing Body, Prof. Chandan Paul Choudhury and College Head Assistant Ajit Bhattacharjee. Dr Apratim Nag, Professor in Physics at GC college, who had also witnessed Raju’s journey of ups and downs throughout the years, said that the college authority would stand by their former pupil during such a testing time. “When we came to know about Raju’s fight against his injury, we felt that we should at least try to help him and stand by his side to whatever capacity we can. Raju is a pride of our college and brought us so many laurels in the past. Even after he left the college, he did quite well to represent his district as well as his state in Cricket tournaments. So this is the least we could do for our former student, who is currently going through his treatment of recovery to full fitness”, said Dr Apratim Nag.

When Barak Bulletin contacted former state cricketer Raju Das, he said that he will be forever indebted to his alma mater college which came forward during his time of crisis. In his usual humble tone, he said, “This morning I came to know about this, and I just want to say that I can never forget this kind gesture from my college who had come forward to help me in such a situation. I have just completed my first phase of rehabilitation and I’ve been asked to return for my next phase after a month. Although the surgery was a success, the doctor said that in order to return to full fitness, I’d have to go through a rehabilitation programme which will take almost 6 months. And that also takes a lot of money for the service, which used to scare me all this while. Now, with this help that I received, I can at least continue my rehabilitation for the next phase.” Raju also confided that today, he got Rs 2,000 from another Professor from the Political Science department of GC College, Swarupa Bhattacharjee.

Notably, in 2015, the year in which he captained the GC college side to the Inter-University champion, he also set the record of amassing the most runs in the entire tournament. Last month, when his treatment was going on in Patna, the Silchar District Sports Association (DSA) donated Rs 10,000 from the Players’ Welfare Fund for Raju’s further treatment for recovery. The General Secretary of the Silchar DSA also urged the prolific cricketer to continue with his treatment as this is a major step in reviving his glorious career to its full glory.