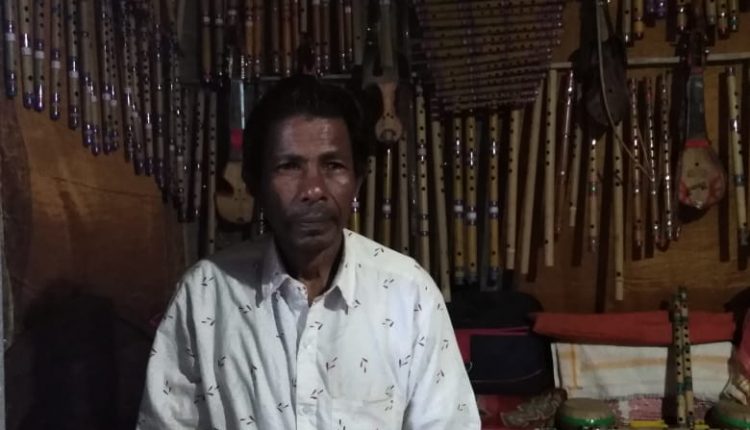 Here is the story of Silchar’s Ranjit Das, a self-trained flute-maker offering a variety at cheaper cost

Assam is a mysterious land popular for its bamboo craft and not just in furniture but also for many instruments. Bamboo from Silchar is quintessential for flute making across India. The thin yet sturdy bamboos grow wild in the jungles of this valley and have no use other than for the making of a flute. Far from the pish-posh of the town lives Ranjit Das, with his wife and four children in a 300 square feet home which he calls his humble abode. This gentleman over the age of 65 is a self-taught flute maker and flutist. To know more about his art and how it all began, Barak Bulletin visited him and had a casual chat over a cup of morning tea.

Edited excerpts from the conversation:

BB: For how long have you been making these flutes and how did it all begin?

Das: I don’t exactly remember, but it’s almost 35 years now. It was probably 1985/86, I was doing folk music, wandering from place to place with my friends, singing at different places, puja pandals, melas, temples and wherever there was a gathering of people. Back then, there was no fancy names like band and all, we called ourselves “gaaner dol” (music group). In one such program, a friend of mine, who played the flute, broke it and we had a big event the next day, so we had to manage a flute anyhow and then the only option was Tarak Flute. There was this old gentleman who charged us 1500 rupees for one D Sharp flute as he claimed those were imported flutes from Calcutta. When we bargained for the price he made fun of us and almost shooed us off. I was young and outrageous then, I challenged his saying that, “No one will buy your flutes anymore, I’ll show you how to make flutes, wait and watch”. It sounds funny to me now but this incident was my biggest motivation. I came back home, got some thin bamboos randomly and started experimenting. I felt like some scientist.

BB: Can you walk us through your workshop and the whole process that goes into making one flute?

Das: When I first started, I had no idea where to get the needed bamboo and where to pierce the wind hole. So, I asked my friends, senior musicians and others who played the flute. They told me that, I can get it somewhere in Jirighat and luckily I had some relatives there. They took me to the forest where there were plenty of bamboos of the finest quality and no one was using it. It was like a treasure hunt and it was one step closer to my goal. I took some bamboo from that forest and came back home. I made measurements from the old flutes we had and checked if they matched the tune. I had many sleepless nights and after almost three months I perfected my first flute.

Even today, I myself go to Jirighat and cut bamboos and bring them home. The cutting isn’t easy, so I can’t trust anyone with it. After bringing them home, I keep them submerged in water for about three months and only then they’re ready for the next step. Piercing holes is the most difficult task, for that first I’ve to heat rods in a coal fire and rods are also of different sizes and girths. After the rod is red hot, I pierce holes on the designated markings in the bamboo, which again is cut according to length beforehand depending on the scale. A cork is placed at the top and then I check the scale with the help of a harmonium. There are several scales like C, D, E, D Sharp and others. The final step is fine-tuning, decorating and applying varnish. 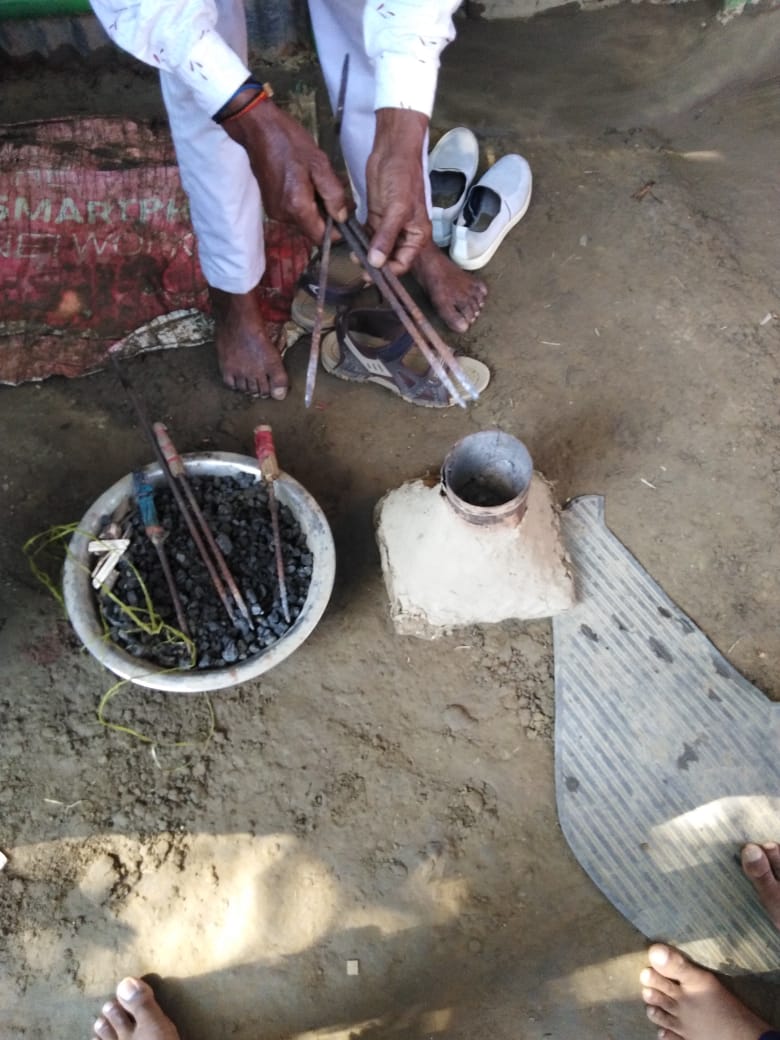 BB: How many flutes can you make in a day?

BB: How do you sell your products?

Das: I’ve never been into selling flutes full time, my life revolves around kirtans, melas and shows so I hardly get the time to set up a stall. Wherever I go to sing, I carry some flutes with me to sell to the people or artists I know. I also get several orders from music teachers or flutists. There’s no fixed source of income plus my flutes cost really less compared to “music instrument stores”.

BB: So how do you manage your expenses?

Das: To be very honest with you, I have never faced a financial crisis with God’s grace. I’m happy with whatever I have. I have three daughters and a son. I worked really hard when I was young to make both ends meet, but never made them feel any scarcity. I’ve also sent them to school and college later. Whatever I earn from kirtans, pujas and other programs is everything I have. Now I’m 62 plus, I don’t have that energy anymore to go on every day. I had to slow down. Now, my son helps me with whatever he earns from the jobs he gets. 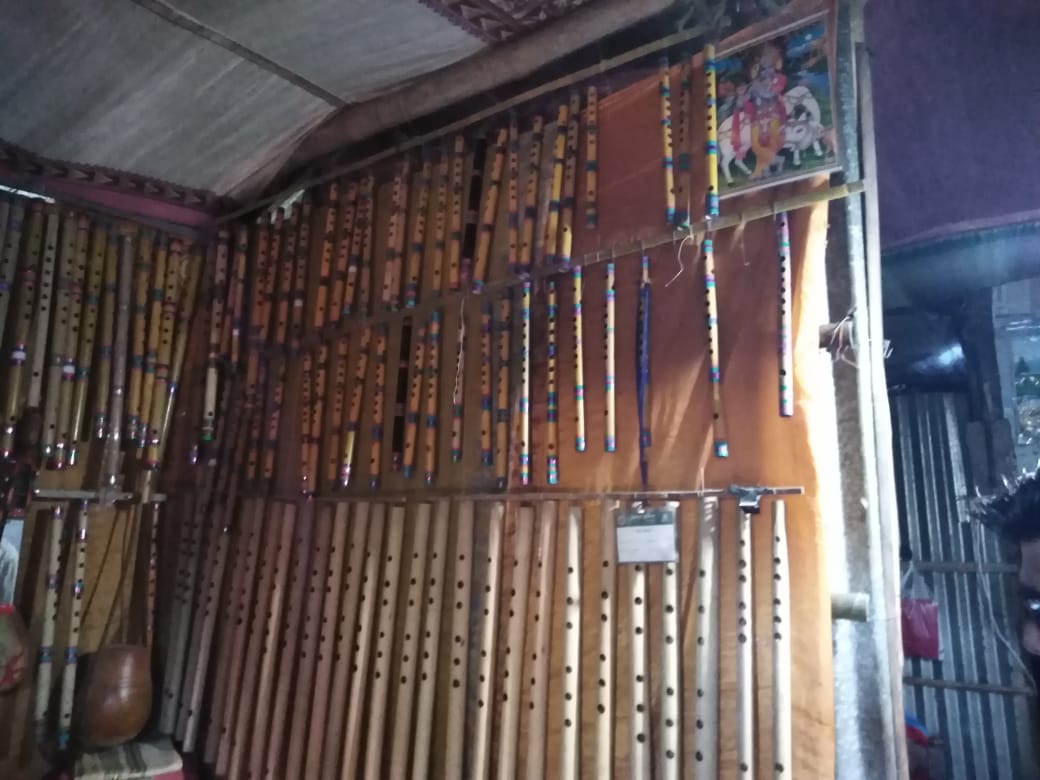 BB: Tell us a bit about your family.

Das: We all live together, I, my wife and four children, who are not “children anymore”. My elder daughter just completed her graduation and the other two are also studying. My son dropped out of school after 10th and started doing odd jobs here and there. He is an excellent dholak player though and accompanies me to my programs. They are everything I have, everything I do is for them. They’re very supportive and I feel so blessed as their father.

BB: How has the lockdown affected your life?

Das: At first it was very confusing, we had no idea about the disease that was spreading and me being a wandering fakir, it was very difficult to stay at home for so long. But rules are rules. I stayed at home for probably 18 months. Only recently I started going out for my work. During the lockdown there were no sources of income, whatever we had as savings was gone and my children didn’t allow me to work given the risk, so my son took up whatever jobs he got to run the family. Modi ji’s ration scheme has helped us a lot during that time. Now, work is less, there aren’t many programs happening, orders for flutes are also scarce.

BB: Was there any competition or rivalry during your initial days?

Das: That’s a whole another chapter (chuckles). In our days, there were many competitions organised by various clubs, Radio and Doordarshan also. One such competition was playing one entire song under 2 minutes and 30 seconds and it was very difficult for everyone but luckily I won three titles in those competitions and other contestants started a rumour that I know jadu-tona (black magic). One more funny thing was related to my flute making. When I first presented my flutes to my friends and senior musicians, they didn’t believe that I made those. They thought I bought it from someone else and was bluffing. I was asked repeatedly, how could I make such perfect flutes with no tools and prior training. I still tell people, when I cut bamboo first to the hole piercing, I start by taking Krishna’s name and he shows me the way. 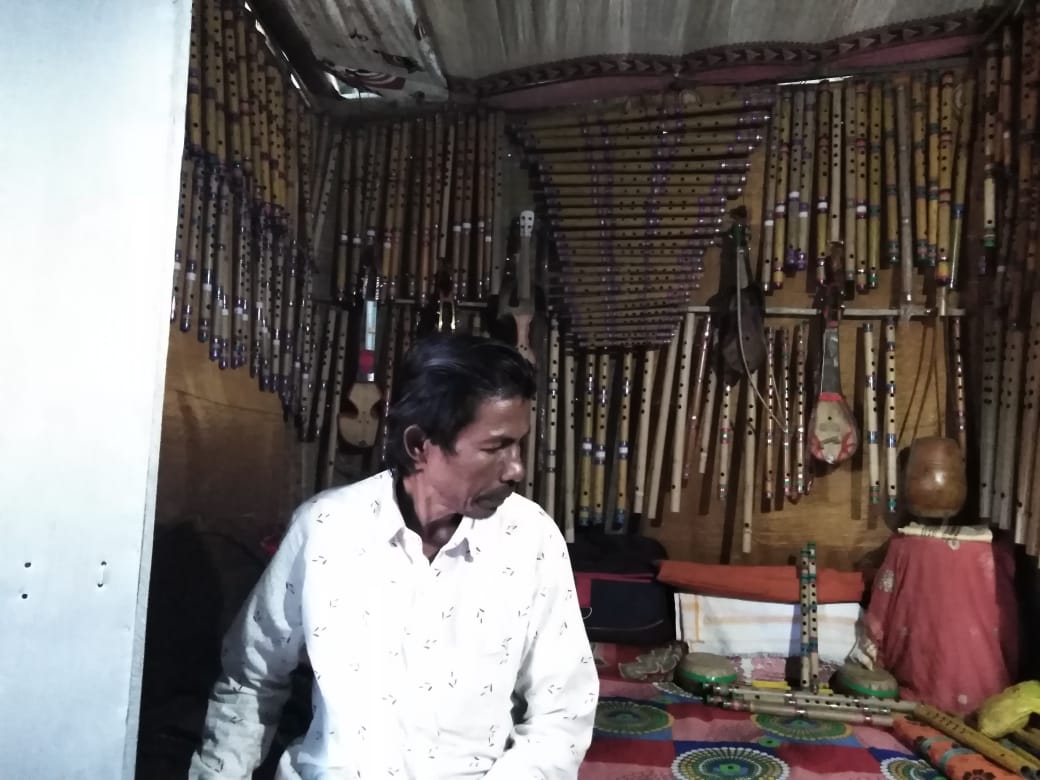 BB: Is there anything that you want people to know?

Das: Yes, please don’t come to me with financial help of kindness, if you want to support me, like the craft that I do, purchase flutes from me. I can also teach you how to play the flute. There are people who buy flutes from me and sell them at a very high price. I would be really happy if people purchased from me directly and I wish I could sell these flutes at a bigger market. I would appreciate help in the form of giving me a way to reach more people. Two more people can get a job under me if the sale was constant and could reach a wider market.

Ranjit Das wishes if there was a pension for artists like him. He is much more than just the flute, you can find Rajit Das at different folk music programs sometimes playing the flute, other times playing the dootara, behala, saranga, percussions and other folk instruments that he makes himself. To support this local artist turned artisan and purchase instruments from him, you can reach his residence in Gangapara Part IV of Rongpur. Visitors can give him a call to ensure that he’s available at his residence, we are sharing his number with his consent here: 9864445743