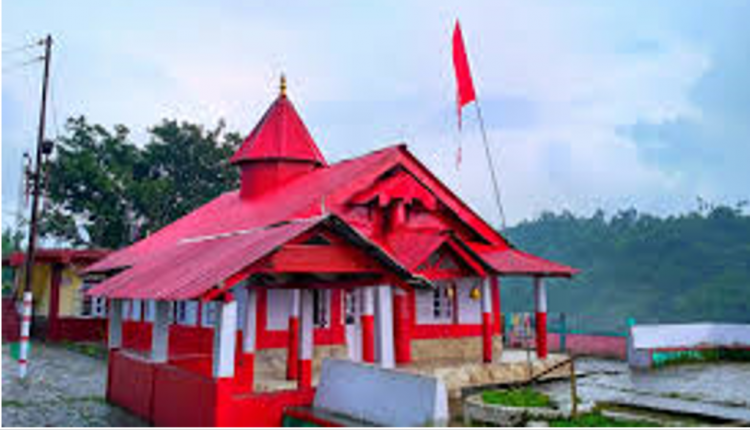 This is the story of a very important Durga Temple, hidden in an obscure village of Meghalaya and the migration of a Maratha Brahmin family to the temple and eventually to the Surma valley (Barak valley of Assam and Sylhet division of Bangladesh). Both these stories are intricately weaved together by a fascinating piece of history which I fortuitously stumbled on a few years ago. Last Sunday, I finally visited the temple on my way back to Assam from NH7 Weekender, the musical extravaganza held at Jowai, hardly 15 km from Nartiang where the temple stands.

Shaktipeeths are sacred places or shrines associated with the supreme female deity or the Mother Goddess as per Hindu belief system. There are 51 Shaktipeeths dotting the Indian subcontinent, including Bangladesh, Sri Lanka and even Pakistan. The exact number of the Shaktipeeths however is debated, with some accounts even suggesting a number as high as 108. But as the most popular legend goes, Lord Shiva infuriated at the death of his wife, Sati, began Tandava carrying her corpse in hand, wrecking havoc across the universe. To pacify Him, Lord Vishnu finally wielded his Sudarshan Chakra and chopped the corpse into 51 parts. The places on earth where Sati’s body parts dropped eventually evolved into Shaktipeeths.

Of these 51 sites, three are situated in the Northeastern states. The most famous of these three is the Kamakhya temple of Guwahati, while the second one is the Tripura Sundari temple of Udaipur, Tripura. But our focus here is on the third and very little known Shaktipeeth situated in Nartiang, a tiny village in West Jaintia Hills District of Meghalaya, where Sati’s left thigh is said to have fallen. Today here stands a temple where Shakti is worshipped in the form of Goddess Durga. Durga is worshipped here as Jainteswari, the ancestral deity of the Jaintia royalty. The temple however is known as Nartiang Durga Temple.

The original temple for the ancestral deity was built by Jaintia King Dhan Manik 600 years ago. As the oral history goes, the Goddess appeared to him in a dream and instructed to erect a temple for her in that place. But, there was a major issue. Like many other ancient tribal practices across India, especially in the North and the east, Nartiang too had a tradition where humans were sacrificed to the deity as a part of the worship. So the orthodox Brahmins from nearby Bengal and Assam were disinclined to worship in a temple where human sacrifice was prevalent. Somehow finally the stalemate was broken as three Brahmins from the Deshmukh clan from distant Maharashtra agreed to serve as royal priests at the temple. Imagine the tough time the King had in finding a priest who would agree under such a condition. The upbringing of the Deshmukh clan in Kshatriya traditions, probably, is the reason why they overlooked the practice of human sacrifice unlike the Brahmins of Bengal or Assam. 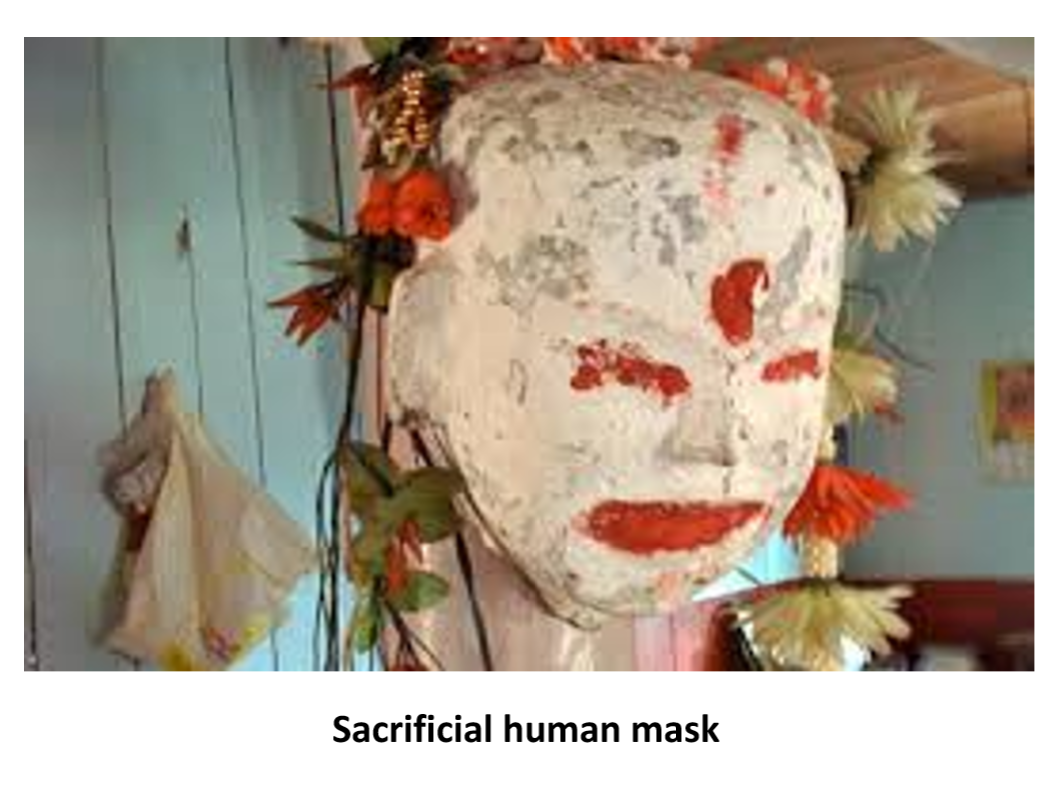 Deshmukhs were natives of Maharashtra, northern Karnataka and adjacent region. The title of Deshmukh, which eventually became a hereditary surname, used to be conferred to the feudal lords in the medieval times by the Maratha kings and also sometimes by the Nizams of Decaan and Mughal rulers in the region. The Deshmukh Brahmins in 18th century rose to the position of Peshwa or Prime Minister of the Great Maratha Empire. Peshwas like Balaji Biswanath, Baji Rao-I and many others were Deshmukh Brahmins, under whom the Maratha Empire reached its zenith and ruled most of India.

Today many in Barak valley write Deshmukh as their surname. Did you ever wonder why these Sylheti speaking people in Barak have this unusual Marathi sounding surname? Well, they all are the descendants of the original three families from the Deshmukh clan who came to Nartiang 600 years back but eventually settled in various places in the adjacent Surma valley and assimilated into the Bengali culture. What is more interesting is the fact is that one bloodline of that family stayed back at Nartiang and still continues to hold the priesthood of the Shaktipeeth. The present priest of the temple is a direct descendant (29th generation) of the first Deshmukh priest who came here six centuries back.

The story of the temple goes on. The original temple was eventually turned into a Durga temple in early seventeenth century under the influence of Queen Lakshmi Narayana, the daughter of great Koch King Nara Narayan, after her marriage with Jaintia king Jaso Manik. Laksmi Narayan was a devout Shakti (Durga) worshiper. Jaintia royalty who were already following a quasi-Shakti cult of their own gradually amalgamated into Hinduism during that time. Thus emerged a weird practice of human sacrifice at that Durga temple; a fusion of tribal cult and Hindu Shakti traditions. The practice however was banned after the advent of the British in mid nineteenth century. 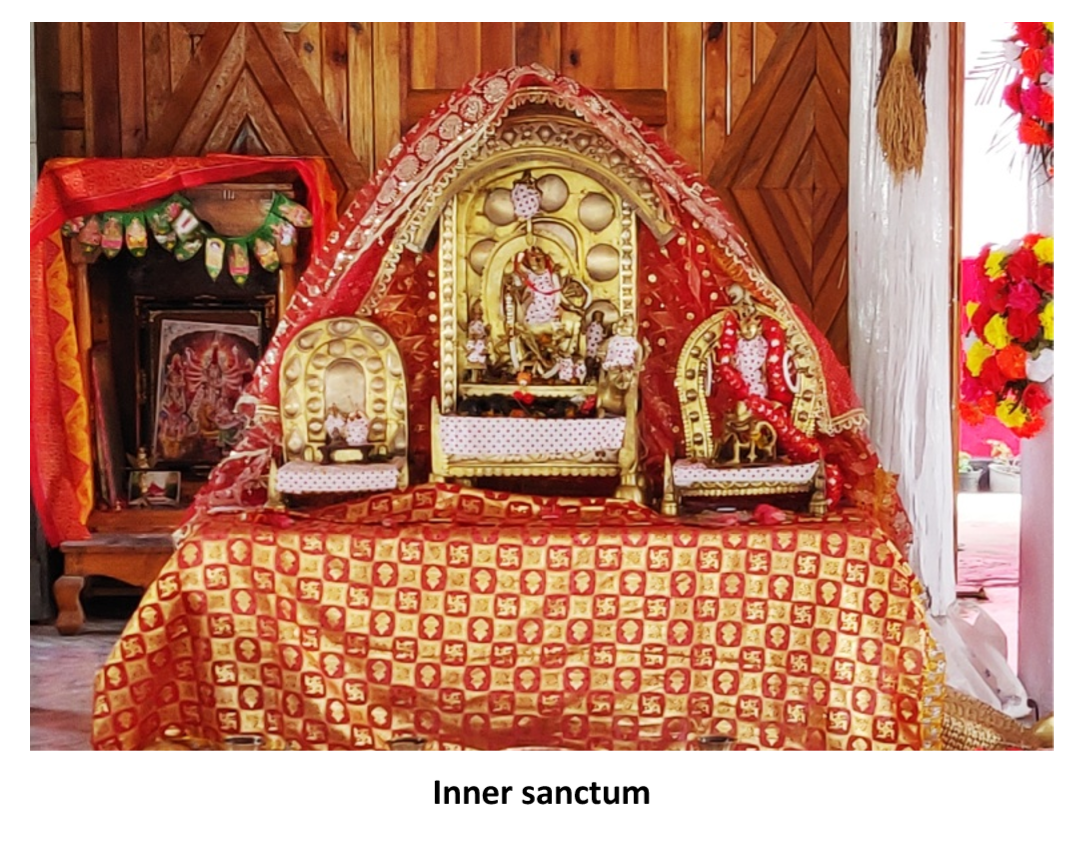 The opening on the floor is still there through which the chopped human head rolled down a tunnel from the sanctum to the Myntang River flowing below. Human sacrifice ended, but animal sacrifice took its place. Every year, on the night of Mahasthami during Durga Puja hundreds of goats are sacrificed at the same place inside the inner sanctum of the temple. At midnight on the same day, a special goat is offered in the King’s name, which is dressed like a human with dhoti, mask, and ear rings: a symbolic throwback to the ancient tradition.

In an unfortunate incident last year, violent clashes erupted between the villagers and the police personnel over the appointment of the new priest. The controversy snowballed after the death of two priests and brothers, Molloi Deshmukh and Uttam Deshmukh, within a period of one year. Local tribal chief, backed by the Ramakrishna Mission appointed a new priest Swapan Bhattacharjee, outside the Deshmukh family for the first time in six hundred years; a move which was fiercely opposed by the tribal women of the village. This resulted in clashes and virtual lockdown of the temple just ahead of Durga Puja in 2018. The High Court of Meghalaya had to intervene. Finally, Oni Muskut (Deshmukh), Molloi Deshmukh’s son with a Pnar (Jaintia) woman, was appointed as the priest, restoring the priesthood to the Deshmukh family. But there still remains a controversy about the legitimacy and ability of Oni as a priest of such an important and historic institution. In my recent visit to the temple last week, I had a brief conversation with Oni. He is too young and doesn’t seem to be properly trained about the rituals. He was not seen in the attire of a priest, unlike his uncle and father. Probably this explains the reason why Ramakrishna Mission had to intervene and appoint a priest outside the Deshmukh family for the greater interest of the temple and the devotees. There is no denying the fact that Deshmukh family is an integral part of the temple, its history and the rituals, historical continuity of which should be preserved without compromising the sanctity of the shrine. 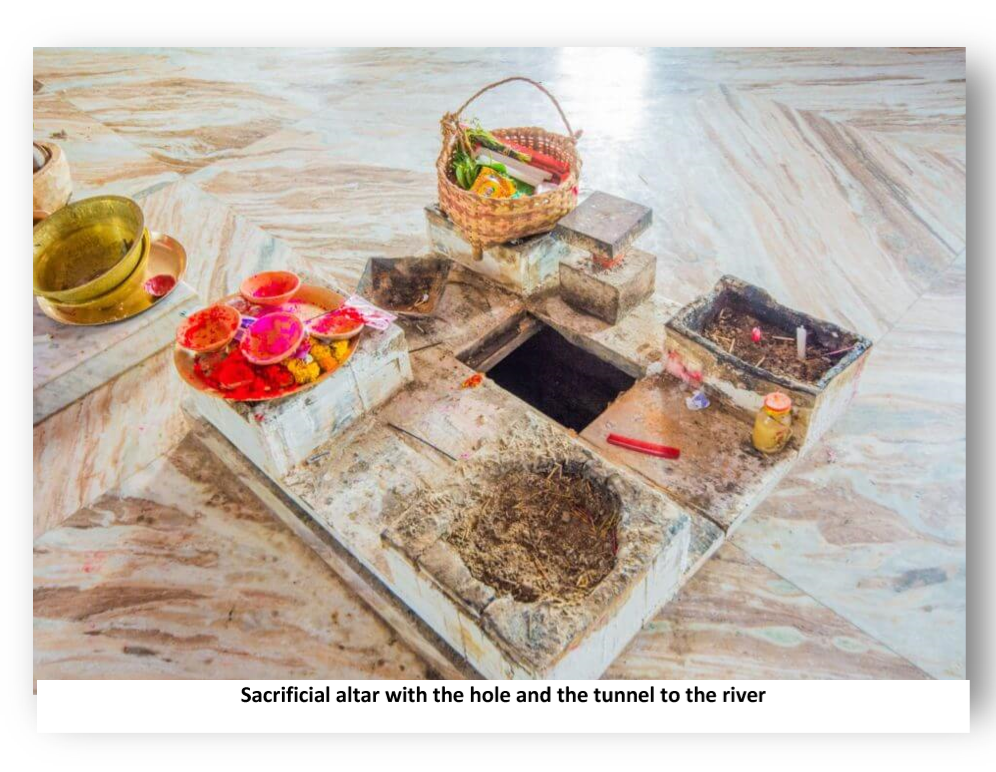 The temple does attract devotees from Assam and other parts of Meghalaya during the days of Durga Puja, but it is still far from becoming a popular spot for the common tourists visiting Meghalaya. The temple complex once served as the summer capital of Jaintia King. Although the entrance gate is still there, the ancient royal palace lies in ruins within the temple complex. Today there stands a government building of Public Works Department over the ruins of the palace.

I would like to end with an appeal to the Govt that the site needs to be brought under immediate control of archeological survey of India for its maintainance and restoration. At the same time I would like to urge everyone to add this in their bucket list.

The author of this article, Samujjal Das is assistant employment officer, Government of Assam.