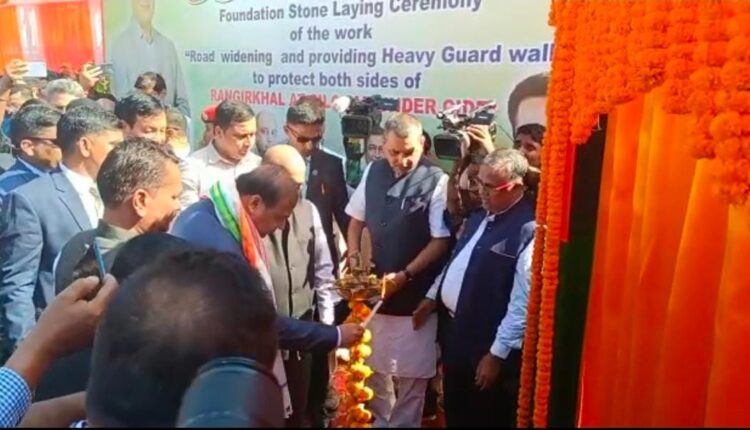 As a part of his tour during the Assam Cabinet Meeting, Chief Minister Himanta Biswa Sarma inaugurated the guard wall of Rangirkhal at Rangirkhari Point. This was the first program of the Chief Minister during this visit and the inauguration ceremony was held today morning at 10 AM. The CM along with other elected representatives of Cachar inaugurated the foundation stone of the guard wall.

Himanta Biswa Sarma left for the inauguration ceremony from Circuit House, Silchar this morning to reach Rangirkhari Point. He was greeted by a huge congregation of locals this morning there. Along with Cachar MP Dr Rajdeep Roy and Silchar MLA Dipayan Chakraborty and other elected representatives of different assembly constituencies, the CM participated in this inauguration ceremony. By raising the curtain from the foundation stone and the lightning of the lamp, the CM started the ceremony. Housing & Urban Affairs and Irrigation Minister of Assam Ashok Singhal also participated in the ceremony along with MLA Kaushik Rai and others.

The foundation stone for the project, “Road widening and providing Heavy Guard Wall to protect both sides of Rangirkhal at Silchar under CIDF” was laid today by the CM. This work is being done to improve the drainage of the urban areas of Silchar as Rangirkhal is very crucial to the drainage system of Silchar.

It is worth mentioning here that, Rangirkhal originates from Mohisha Beel from the eastern part of Silchar town located near river ‘Barak’ in Sonabari Ghat. While flowing towards the western direction across Silchar town carrying major stormwater, it finally discharges into river Ghagra. The total length of the channel is 17000 Meters. By rejuvenating the channel, the urban flood can be mitigated to a larger extent.