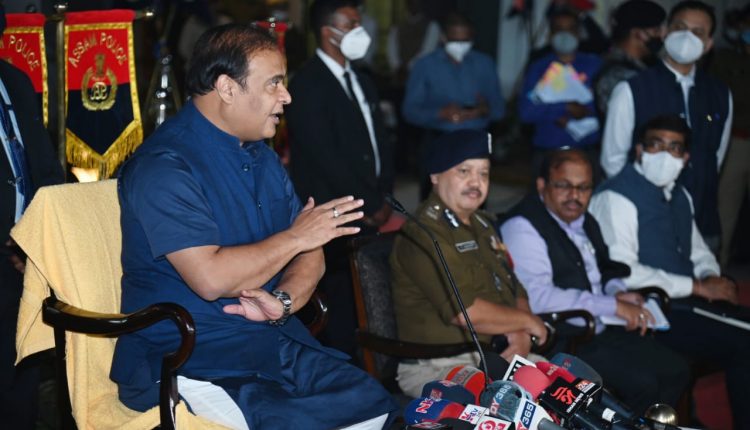 Launch investigation within 24 hours of the FIR, roll out advt. for 6000 posts; CM in Assam Police Review meeting

Assam Chief Minister Dr. Himanta Biswa Sarma has announced a bunch of ‘reformative measures’ in a review meeting held at the Assam Police headquarters in Guwahati, with senior officials of Assam Police, with the plan to transform Assam Police into ‘Smarter Police Force’.

Several important decisions have been taken at the review meeting, including the long impeding, unresolved cases, new recruitments in various posts in Assam Police. CM Dr Himanta Biswa Sarma also unveiled a handbook on cybercrime titled ‘CYBER SECURE’, which deals with the increasing threat of cybercrime and the way outs.

The new initiatives brought an essential and timely direction to the police that the investigation be started within 24 hours of lodging the First Information Report. The new announcement also promises to enact new accident reports, Passport verification, and post-mortem report protocols. It is decided that all the reports have to be processed and released soon and passport verification has to be completed within 30 days.

CM Dr. Himanta Biswa Sarma tweeted the highlights of the important decisions that were taken in the meeting. This includes- reviewing and resolving all cases dismissed by Guwahati Police without logical coherence since 1992 and settling as many unresolved cases as possible by March 31, 2022.

CM also announced that advertisements for 6,000 posts, including Five commando battalions, would be published by next week. Vacant Sub Inspector posts would be filled up soon. Assam Police will get 1,000 new quarters for its personals, and DGP, Commissioner Officers would be renovated and upgraded, according to the announcements.