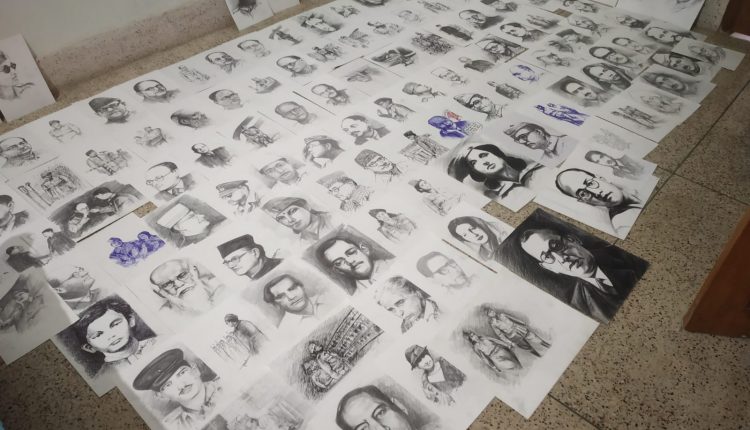 Meet Silchar’s Suprotik Roy who paid tribute to Netaji with 126 sketches: “It’s a journey” he says

“বীর সুভাষ এর মহান দেশ” or Great Land of the Veer Subhash, this is a line from the song “Bharat Amar Bharat Basrsha” written by Shibdas Banerjee. “You give me blood and I shall give you freedom”; these lines are etched in the minds of thousands of Indians forever. It is the 125th Birth Anniversary of the most spirited Braveheart son of this soil — Netaji Subhash Chandra Bose. Born on 23rd January, 1897, an unparalleled leader who kept the torch of freedom burning not only on our soil but also on foreign shores, by leading Azad Hind Fauj. We all hope with optimism, that Netaji is alive somewhere and he will be back. There have been many commissions, research, committees and investigations both in India and abroad, but none could come up with some concrete proof of his death. There have been mysterious re-appearances of this Braveheart which is a very fascinating investigation subject. The nation pays tribute to Netaji Subhash Chandra Bose today, or as it is also known as Parakram Diwas.

Joining the whole Nation, is also our “Island of Peace”. In every lane of this valley lives people who dream of Netaji’s vision and his ideals for India. In every lane lives a “Subhash”, probably that’s why we’ve lanes and colonies named after him.

Starting from Subhash’s college days portrait to the mysterious “Gumnami Baba’ or “Bhagwanji” form, Suprotik has covered it all. He has used pen, pencil, charcoal, fineliner and others as his medium of expression on paper. He has also drawn portraits of Rash Behari Bose, the founder of Azad Hind Fauj, Laxmi Sehgal of the commander of Rani Jhansi Regiment of INA, Neera Arya and Saraswati Rajani Regiment. It took him more than seven months to complete the sketches.

One of his sketches in watercolor is titled, “Last Confrontation With Gandhi ” which signifies his resignation from the Indian National Congress, where he was elected as the President.

Commenting on the completion of his mammoth task, he says “It was a wonderful journey”