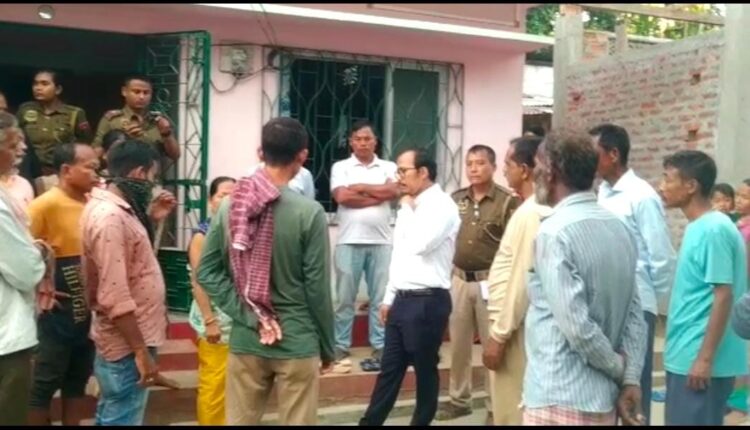 A partially naked dead body of a house help has been found inside the toilet of a residence in the Bontarapur area under Kachudaram Police Station of Cachar. The deceased has been identified as Suniti Rai alias Krishna, who was a house help at the residence of Bacha Sinha.

While the house owner says it is a case of sucide, Krishna’s mother alleged it to be a murder case. This incident happened this morning and it created unrest in the area when the news spread. Local police rushed to the spot and after much infighting between the house owner and Krishna’s family, the dead body was sent to the Silchar Medical College and Hospital.

This incident happened in Bontarapur area under the Sundari Gaon Panchayat area which falls under the Kachudaram Police Station.

According to the available information, Bacha Sinha resides in Mizoram for work and at this home in Cachar, Shyama Sinha, his wife stays alone. They kept Suniti Rai alias Krishna for domestic help and to manage the daily chores of the house. Shyama Sinha alleged that it was a suicide and said, “Today morning I was in the vegetable garden, when I came back home I asked Krishna for tea. Even after shouting her name, she didn’t respond, so I went to look for her.”

As per the woman, when she entered the bathroom, which was locked, she was shocked to see Krishna hanging from the ceiling using her scarf. She along with her sister wanted to take her down but it was too late.”

When Krishna’s mother was called and informed that her only daughter had died, she rushed there along with some locals of her area. Krishna’s mother didn’t agree that it was a sucide and alleged that the people she worked for had killed her and it was a case of murder. The locals also alleged that there is a mystery behind this and refused to claim the dead body. When police intervened in the situation, there were requests and demands for a postmortem to know the reason behind her death.

The Officer-in-charge of Kachudaram Police station sent the body for postmortem in the presence of a magistrate to the Silchar Medical College and Hospital.