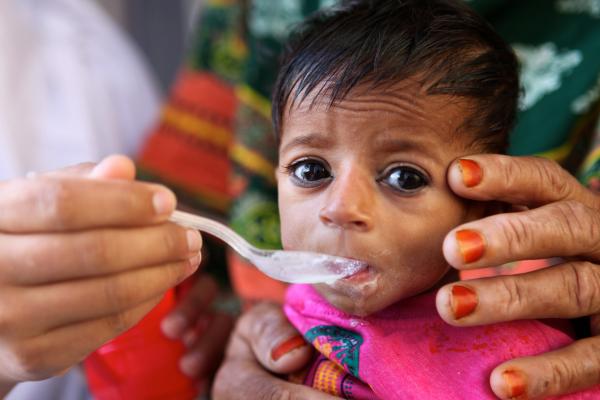 NFHS Malnutrition Report: Why do 30.7% of children in Cachar fall under the “Wasted” Category?

The latest National Family Health Survey report for the year 2019-20 shows troublesome trends emerging from Cachar. A study by Dr. Tulika Goswami Mahanta, professor and HOD, Community Medicine, Assam Medical College on the NFHS report regarding Malnutrition in Children 30.7% of the children in Cachar are falling under the “Wasted” category up from 30.6% in the previous survey while the State average is 21.7%.

According to WHO, wasting falls under the manifest of undernutrition which is technically defined as low weight-for-height. It often indicates recent and severe weight loss, although it can also persist for a long time. It usually occurs when a person has not had food of adequate quality and quantity and/or they have had frequent or prolonged illnesses.

Head of Pediatrics Department, Silchar Medical College and Hospital, Dr. Nripen Pathak, explains that malnutrition and wasting in kids are major problems in this region. He says, “There is a significant lack of awareness about nutritious diet for children and especially about breastfeeding in Cachar. We, advise children, to be exclusively breastfed for the first six months at least but most people don’t seem to practice this. They feed their young babies with diluted tinned milk like Lactogen with water.”

Packaged food brings with it a different set of challenges. To cut expenses, Dr. Pathak says, families often run a tin twice as long as it is supposed to last. “If tin is supposed to last five days, mothers dilute water and run it for 10 days if not 15. We have also noticed that that kids are fed diluted cow or goat milk. As a result, the kids only consume white coloured water and no nutrients. They even feed their children with Britania Biscuits, how will the little kids get the nutrients they need for their healthy development?” the child-specialist points out.

He claims that the poor socio-economic status of the people is the one big reason why so many kids fall under the “wasted” category. He asserts, “Morbidity in kids who are wasted is very high. They are immunocompromised and so, their body fails to resist any normal disease and even diarrhoea can cause deadly repercussions. The mortality rate in such kids is very high and most of them who survive face issues with their growth and development both mentally and physically. The very poor social strata also make the mother chronically malnourished and anemic who in turn give birth to undernourished kids.” He also points out that access to healthcare both for the mother and the children remain of utmost importance.

The solution lies in awareness, opines Dr. Pathak. “The importance of breastfeeding must be communicated to all parents and especially mothers as that is the best source of nutrients for the kid. Responding to the immunisation programs conducted by the Govt. too plays an important role and better family planning at the basic can reduce a lot of the issues with malnutrition.” 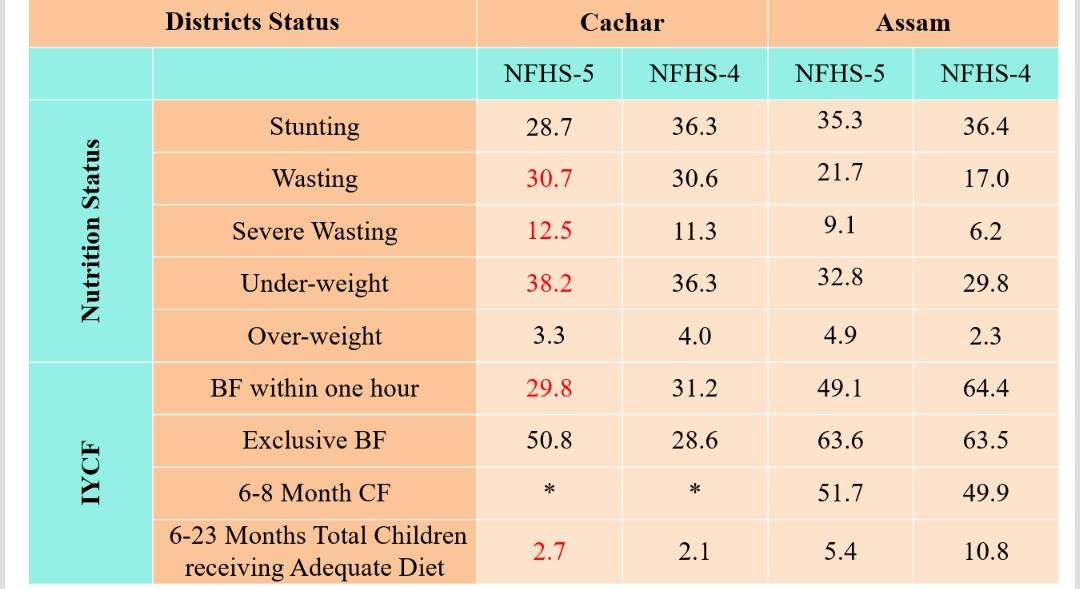 Additional District Commissioner of Cachar Eldad Faihriem who is in-charge of the district’s Department of Health expressed deep concern. He says, “We recognise the growing issue of malnutrition and are equally worried about the same. Though we are trying a lot to solve this issue but there is a serious problem at the grass-root levels which results in all our efforts becoming a failure.” He blames the Social Welfare Dept. of the Government. “The ground level staff tell me that sometimes they don’t get any aid from the govt. for distribution among the needy. Everything somehow goes missing in the distribution system and we are trying our best to identify the issue and solve it. This being Poshan Month, we are pushing hard for a nutritious diet for all children and are working on related plans for the same. The Govt. has set up schemes and benefits for the people but the onus is on the various departments that they make it accessible to all in need. We are trying to overdrive this entire system and come out with effective measures for the problem,” asserts the ADC.

The district administration, ADC Faihriem says has come across many reports that need further scrutiny. While on paper, everything seems hunky-dowry, the surveys conducted show a different ground reality. He concedes and informs that the Cachar district administration is trying to set up a control room to receive feedback and act realtime.

Saswati Shome, District Social Welfare Officer refutes the administration’s accusation. “We have been delivering door to door services through our network and have been 100% successful in delivering the aids and services to the masses,” she counters. “There are no discrepancies or complaints and we don’t know on what basis did the ADC accuse us and our department of not doing the job right.”

While one can continue to pass the parcel and play the blame game, the fact is – despite all the initiatives rolled out by the government, malnutrition and especially wasting is on the rise. Due to this malnutrition at an early age, these kids will grow up with several medical complications. They will to weather the storms that life will serve them. It is an issue that needs detailed discussion but the stakeholders are hardly bothered.