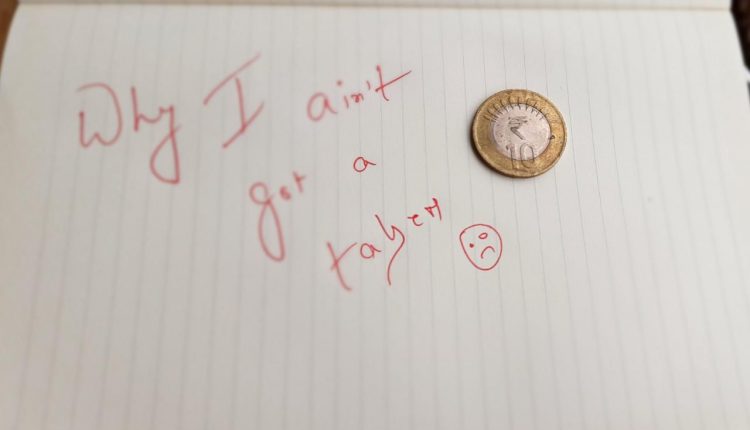 In 2005, the Reserve Bank of India introduced 10 rupee coins to Indian currency under ‘The Coinage Act.’ The central bank of India, the only authority to mint coins in the country, said it decided to introduce 10 rupee coins to meet the demand for change in the Indian market. The bank also stated that the rising cost of minting Re 1 and Re 2 coins was another reason behind the introduction.

15 years after the introduction, there are 21 designs of the coin circulating in the market. All over the country, it is a legitimate currency, but you come to Silchar, it ain’t got a taker.

I have five 10 rupee coins in my wallet since September 14 (the day I landed from Mumbai). Every day, I try to exchange it in the market, but nobody agrees to accept it. First I tried to exchange it for a trip in an autorickshaw and the driver said these coins are not accepted here as they are considered to be fake.

Without arguing with the rickshaw driver, I replaced the coin. Next, I tried to exchange it against a plate of momo in Jhalupara. There too, the coin was not accepted, but the reason was different. The shopkeeper told me that the coin is not accepted by the general public and that is why they stopped accepting it. He added that currently, he has 10 rupee coins worth Rs 4000.

No point arguing with someone claiming to have stacked 400 coins. But for someone who keeps the wallet in the rear pocket, five coins force a lot of pain and that too in the wrong place. I had to ride along with my cousin for an odd job and realised his mask was soiled. So, we stopped by a popular, renowned, and respected medical store in Silchar and asked for surgical masks.

I got them and in return gave a 20 rupee note. Actually, it was raining and I had forgotten about the coins. The shopkeeper told me that the note I gave is torn and I must change it. I did it immediately and gave two 10 rupee coins. He refused to accept them. Now, he wasn’t a rickshaw puller or momo seller, he is an educated pharmacist refusing to accept a government introduced coin. I was surprised, to say the least. I asked him why, and he said this coin is not considered legitimate in Silchar and no one takes it. I asked him how a coin issued by the government of India would be illegitimate in India. He replied, “I sold you stuff worth Rs 20 and so I cannot waste time arguing with you, we do not accept 10 rupee coins and that is what it is.”

He went ahead to say that even banks do not accept it. I went to a petrol pump the next day and they did not accept it either. This is not the first time a 10 rupee coin has amazed me. Two years back, Barak Bulletin did a show ‘Silchar with Hrijoy’ wherein, in the first episode Hrijoy Kanungo went on the streets discussing “Why 10 rupee coins are not accepted in Silchar”. In no time the video went viral. The then deputy commissioner who is now the director of NHM Assam, S Lakshmanan issued a statement urging the market forces at play to circulate 10 rupee coins just as any other coin. 24 months later, I am stuck with five coins in my wallet.

Here is the episode

After the chemist told me that banks do not accept it, I went to a branch of State Bank of India and asked the branch manager why they don’t accept 10 rupee coins. He explained that the 10 rupee coins are not circulating in the market but they are just getting stocked with people and especially business owners. So, they often reach a bank with a bulk of it. The day I was talking to him, a customer walked in with coins worth Rs 8000.

“To count and accept that, I will have to put someone at it for a day. Also, it is against the circular issued by RBI. So, it is not true that we do not accept 10 rupee coins because we consider it illegitimate. We do not accept it only when it is beyond the permissible limit,” explained the branch manager.

Be it scholars or daily wage workers with meagre education, we have all joined hands to deny acceptance to a coin issued by the Central bank of the country. A coin that has the national emblem with ‘Satyameve Jayate’ written on it is termed fake and called illegitimate every day on the basis of some rumours. It is exactly like not accepting the flag of India in Silchar or not accepting ‘Jana Gana Mana’ as the national anthem. “One nation, one rule?” anyone?

There won’t be another one: A tribute to Prof. Jyoti Lal Chowdhury, a doyen of…