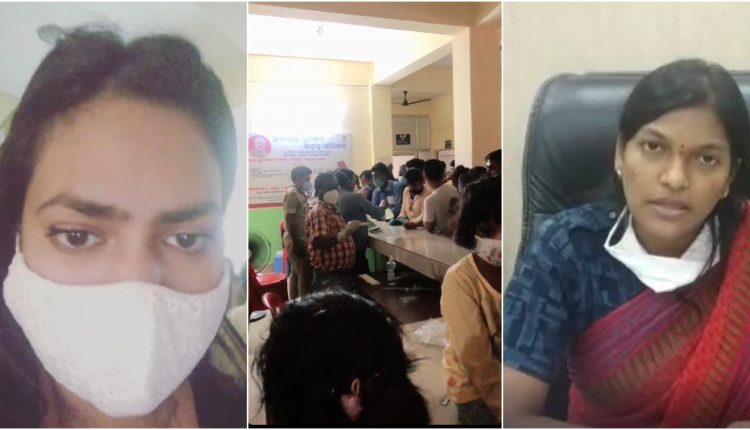 “She Truly Madly” an Instagram user, uploaded a video yesterday that exposed the mismanagement at Tikal Model Hospital where the Cachar district administration is testing air passengers. On day one of the procedure, more than 300 passengers escaped the compulsory testing. The administration submitted the list of passengers who violated the government rule to Police.

The account belongs to Sonal Kurmi who describes herself as an influencer/blogger. She posted the video on Facebook too. Each frame of the video highlighted gross violation of Covid protocols. The technicians were not wearing PPE kits, the RAT kits were kept without following basic hygiene and there were people standing on top of each other.

Sonal Kurmi, who returned from Delhi to find safe abode in Silchar, raised many questions through her 17-minute “exposé”. To summarise her point, if all passengers are asked to pay Rs 500 to get themselves tested, they at least deserve a systematic proceedings where COVID protocols are followed to the ‘T’. It is also worth mentioning here that the passengers who are questioning the administration, themselves flouted most norms.

The video is raw and in some instances misleading too. A young girl in the video says there is no way one can provide RAT results in 15 minutes as all over the world it takes at least two hours. Which is not true at all and can be misleading especially when it is a part of a viral video. Despite the inconsistencies, this one video singlehandedly makes it clear that the 300+ who had fled from the testing facility might have valid reasons too.

If there were an iota of doubt about the content of the video, it is gone after the deputy commissioner of Cachar’s reaction today. The top bureaucrat of the district that is dealing with rapid rise of cases and an election won’t react out suspicions if the system is not at fault.

The deputy commissioner of Cachar, Keerthi Jalli, in her media statement, says, “It’s a new setup and will certainly take time to settle. Nothing can be perfect without civilians taking responsibility for their own behaviour. There are 250 chairs made available where passengers may sit and fill up the form and then go one by one to the counters. Nobody sits ever. We request them to sit and they refuse to listen. This was the original system planned. We will also deploy more persons for maintaining discipline in testing site for the flight passengers.”

Jalli adds, “It is unfortunate that people are still doing so. We are always accessible and have evolved our systems even previously. I earnestly request people to mail us practical issues and we will surely act upon it as we had done in the past. It is trying times for all of us but to constantly highlight what is not being done without sharing any responsibility is just demoralising the overworked health staff.”

The deputy commissioner of the district which has only  40-COVID ICU beds, goes on to add, “Making such videos and defaming the efforts and risk put by our staff and their families is not fair. The civilian concerned could herself volunteer and have helped the administration further by requesting co-passengers to cooperate.”

Basically, the deputy commissioner reiterated what the Prime Minister of India, Narendra Modi said – “be self-dependent.” If everyone follows the protocols there won’t ever be a mess and the question of lockdown will never arise is what the PM had said. So, if Sonal and her co-passengers followed social distancing norms, would there be a chaos at the Tikal Model Hospital? Probably not! But there is no denying that it was indeed an administrative failure.