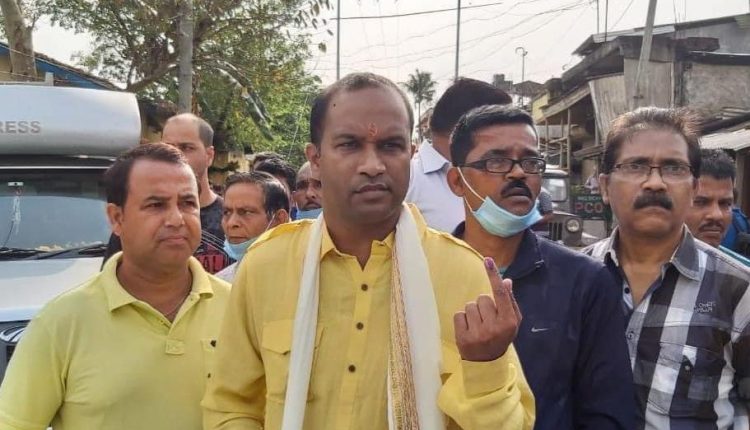 After Himanta Biswa Sarma has been announced as the next Chief Minister of Assam, he was sworn in today as the 15th Chief Minister of Assam at the Sankardeva Kalakhetra in Guwahati. Apart from him, his cabinet ministers who’ll serve the state of Assam for the next 5 years also took their oaths today. But for the people of Barak Valley, who helped the ruling BJP party in winning 6 seats out of 15, this new cabinet of ministers is merely a reflection of the state’s indifference to this region. That’s what Congress MLA Kamalakhya Dey Purkayastha thinks as Parimal Suklabaidya is the only name from Barak Valley found a way to the cabinet of ministers under this new tenure of Himanta Biswa Sarma.

Parimal Suklabaidya won the constituency of Dholai by beating his prime rival Kamakhya Prasad Mala of Congress. During the previous tenure of Sarbananda Sonowal as the Assam CM, the Dholai MLA served as the Minister of Forest, Excise and Fishery. Although Parimal Suklabaidya did manage to retain his seat in the cabinet of ministers, no other name from the Barak Valley made it to the list of 13 cabinet ministers that took oath today.

Regarding this, Congress MLA from North Karimganj constituency Kamalakhya Dey Purkayastha said that by judging the performance of the BJP in the Barak Valley, the party high command should’ve included more representatives from this region than just one name. “During our tenure, we had 3 MLAs from the Barak Valley in the cabinet. Judging by the BJP’s electoral performance among Bengali voters, they should’ve included at least 3 games if not 4 from the community. It is the 90 lakh Bengalis who wholeheartedly elected this party to power, and this is how the party has decided to repay the people”, said Kamalakhya Dey Purkayastha.

During Congress government under Tarun Gogoi’s leadership, Gautam Roy, Siddek Ahmed and Misbahul Islam Laskar served as a part of the Assam Government’s cabinet of ministers. Purkayastha was quick to take a jibe on Sarma’s council of ministers by stating that.

While talking about his expectations from this newly elected government, Dey Purkayastha said, “I’ve been saying it for a very long time that Karimganj needs a medical college, for which I’ve raised this issue many times as well. In the entire Barak Valley, the Silchar Medical College & Hospital is the only health centre of its standard, which is not at all enough for a region boasting 40 lakhs of population. So, setting up a medical college in the Karimganj district is still my priority and I hope the competent newly elected government sees it through.”

Kamalakhya Dey Purkayastha also stressed the need to have multiple MLA’s from Barak Valley in the Assam cabinet. Further adding, he said, “When there are multiple people in the cabinet, it creates a sense of competition so the leaders are bound to perform well and keep their promises. If there’s only one representative from the entire Barak Valley in the cabinet, the real issues of the grassroots level won’t make it to the upper hierarchy of the government. Hence, proper representation of a region in the government is of utmost importance.”

He is also of the opinion that this decision of including only one leader from the Barak valley in the government goes a long way to show their true ‘intent’. He said, “This is nothing but a conspiracy to erase the Bengali identity and reinforce a sense of majoritarian Assamese Identity among the people of Barak. The same Bengali people, who played a pivotal role in electing this government this year, are being ignored and cornered now in the government as is seen in the cabinet. “