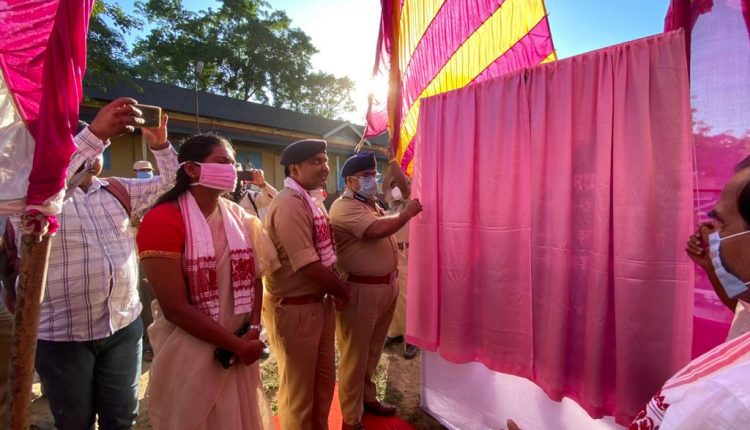 A centralised function was held at Jengraimukh of Majuli on Sunday, where Chief Minister, Sarbananda Sonowal laid the foundation stone for the construction of 100 police barracks using Pre-Engineered Building technology.

At the outset all the dignitaries were greeted with traditional “gamocha”.

Speaking on the occasion, MLA Katigorah, Amarchand Jain said that his residence is close to the Katigorah Police Station and for the last 60 years he did not notice any upliftment or development of the station, he expressed his pleasure for katigorah being chosen for construction of one of the police barrack in the first phase. He also lauded the initiative taken by the present government.

MLA, Borkhola, Kishor Nath said that Borkhola Police Station being one of the oldest police station of Assam, which requires to be upgraded and developed and at the same time others police outposts of Borkhola which are in a dilapidated condition should be upgraded. He also mentioned about the requirement for the set up of one police outpost in “Dudpatil” area under Borkhola constituency. He also lauded the initiatives taken by government for modernization of police force in Assam.

Deputy Commissioner, Jalli said, “Moitri’ can be construed as friendship. The citizen policing strategy, initiated by the government, tends to build a bridge of harmony and brotherhood between the public and the police. The infrastructure will remain as an asset for the entire department. If and when the basic logistics work properly, the number of complaints from the public will also come down.”

Jalli said the modern technology used in the structure will surely be an epitome of its kind and the future endeavours can also be explored through the same. “I congratulate the police department for this beautiful scheme and unique idea. It will surely lead the district towards further development,” she quipped.

While delivering his speech, DIG southern range, Dilip Kumar Dey said, “In the southern range of the State, functions were also held in Silchar, Karimganj, Hailakandi and Haflong. Foundation laying ceremony for three PEB police barracks held at Cachar Police Reserve, two each in Karimganj, Hailakandi and Haflong in presence of Hon’ble MLAs of respective districts, and Hon’ble MPs of the respective constituencies. Of the total 100 police barracks in PEB structure in the first stage for the first time in Assam Police as envisaged under the ambitious Moitri Scheme under the mission of SMART policing in India as announced by the Hon’ble Prime Minister of India in 2015, foundation stone laying ceremonies are being held for three PEB police barracks in Cachar, two each in Karimganj, Hailakandi and Dima Hasao districts in the Southern Assam Range along with other districts of the State”.
The 100 altogether new modern police barracks will provide accommodation for 7,000 Assam Police personnel all over the State. “This will go a long way in improving police-public relationship to a great extent where police personnel in the lower ranks are assured of a decent living accommodation after a hard day’s work. We feel proud to be the beneficiaries of the noble project launched by the government under the leadership of Chief Minister of Assam Sarbananda Sonowal for the greater welfare of police personnel in the state,” he added. Replying to the point raised by MLA Borkhola ,DIG (SR) assured that the Building will be constructed at Borkhola Police station in the next phase.

Superintendent of Police, Bhanwar Lal Meena said, “Three barracks will be constructed in Cachar district and out of them, two will be built in Silchar and the other at Katigorah. Built with PEB technology, each barrack will accommodate 70 personnel. Each will have toilets, a kitchen and a dining hall. It is our belief that the barracks will go a long way in improving the living conditions of our personnel, thereby improving their performance on the ground”. Additional superintendent of police Cachar Jagadish Das anchored the programme….