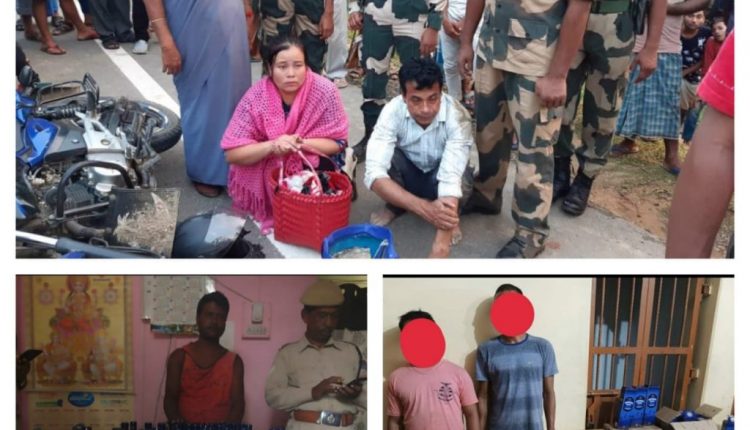 BSF in a statement informed that on receiving specific input, the troops of BOP Banga intercepted a motorcycle (Pulsar) bearing No. AS 10 D 0593 near Srigouri on NH 37 and seized contraband items, suspected to be Yaba tablet, along with 2 Indian nationals. The market value of the seized tablets is ascertained to be Rs 58 lakh. The name of the two arrested are Kamal Uddin (41) of Batarsi village under Karimganj district and Nita Chhetri (35) of village Balijan in Karbi Anglong district. “Both have been handed over to the Badarpur police for further action,” the statement mentioned.

In yet another similar success, Cachar’s Sonai police acting on a tip-off, conducted a raid in a liquor shop and seized huge amount of foreign liquor. The owner of the shop, Krishna Dutta’s has also been arrested during the raid.
In another in the premises of Surjyo Das in Silchar’s Ramnagar area, Cahcar Police seized huge amount of gambling cards along with cash of Rs 52,730 and 5 numbers of mobile phones from the residence. Six persons were also apprehended during the raid who are identified as Shibu Das, Jayanta Barman, Arjun Choudhury, Manmohan Das, Jibon Das and Ajay Barman.

Like Karimganj and Cachar, Hailakandi Police too attained some recent success. On Monday, during routine checking it seized 260 bottles of Indian made foreign liquor (IMFL). Police officers on naka duty under Katlicherra PS intercepted a truck heading towards Bhairabi in Mizoram while trying to clandestinely move without any document. Two persons were arrested.