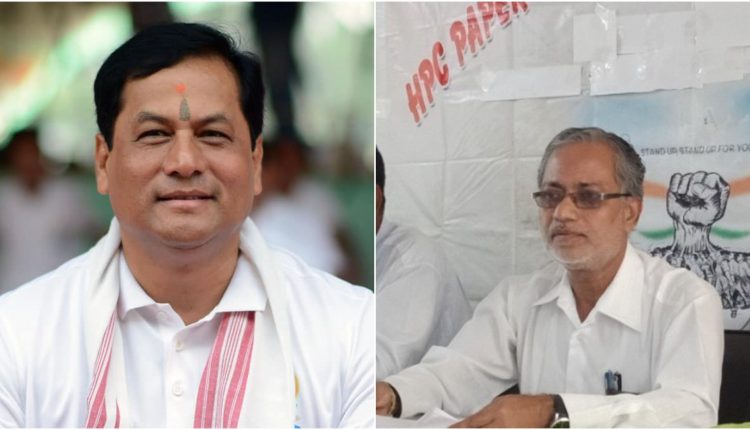 Chief Minister Sarbananda Sonowal was in Silchar today, to campaign for BJP’s candidate. At Meherpur, after his speech, he met the press and said that he has no doubt about BJP’s victory in Silchar.

The chief minister reiterated his trademark – “Barak, Bramhaputra, Pahad Bhoium,” and said that there is no partiality in the state. “This government has provided security and progress to the people of Assam which they were craving for,” said the chief minister.

When asked about the revival of the two Paper Mills in Assam, the CM said, “Both the Paper Mills will be revived by the BJP government.” It is worth mentioning here that the Cachar Paper Mill in Panchgram and Nagaon Paper Mill in Jagiroad which are units of Hindustan Paper Corporation, has been defunct. The employees have not got salary and other employee benefits for more than four years.

After the manifesto was rolled out by the Bharatiya Janata Party, protests broke in both Cachar and Nagaon Paper Mills. In Silchar too there were protests against the ruling party’s partiality. Many said that the BJP has done it intentionally to divide the joint unions and weaken their demands to revive the Mills.

Why did they protest so vehemently if Cachar Paper Mill’s name is mentioned in the manifesto, as stated by the chief minister in Silchar earlier today? President of Joint Action Committee of Recognized Unions (JACRU), Manobendra Chakraborty replied, “The CM is blatantly lying yet again.”

“We have read the entire manifesto and not once but several times. They have mentioned Jagi Road paper mill and there is no mention of the unit in Panchgram. The chief minister met us 19 times with different promises and now he is lying while standing in Barak Valley. He must be ashamed of himself,” asserted Chakraborty.

When chief minister Sarbananda Sonowal said that Cachar Paper Mill is there in the Manifesto, MP Rajdeep Roy was also present along with the Silchar candidate, Dipayan Chakraborty. Manobendra Chakraborty took a jibe at Rajdeep Roy. “On February 20, 2021, we were peacefully protesting in front of Rajdeep Roy’s reisidence. He came and met us and said that he along with all the leaders in Barak Valley will jointly demand the revival of Paper Mill. If necessary, he said, they will hit the road,” informed Chakraborty.

“However, as we all know from his Facebook post, Rajdeep Roy was in the high-level manifesto committee and yet, Cachar Paper Mill did not find a space in the printed document. It is certain that he does not care about the horrible condition that we are in. I compare him with Mir Zafar (who betrayed the Nawab of Bengal) and that is what people of Barak Valley will remember him as,” added Chakraborty.