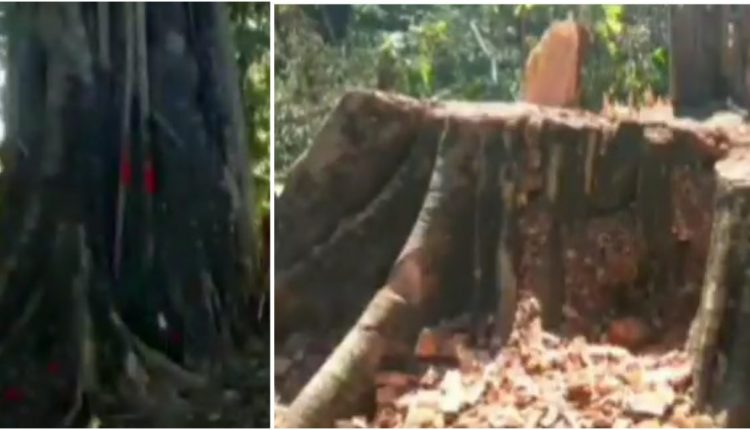 In Katigora’s Mahadev Tilla, there was a tree that the Hindus worshipped for years. In the evening incense sticks and candles were placed and so was done on auspicious occasions. The banyan tree has been cut which has hurt the religious sentiments of the locals.

A section of the locals believes that the tree was cut inadvertently while on the other hand, another section alleges that it was done intentionally to threaten the Manipuri and Bengali Hindu communities living in the locality. This area has a large settlement of people belonging to the Khasi community.

“People from the Khasia Punji (Khasi Settlement) intentionally cut the tree to threaten us against any sort of Hindu practices. They have been doing such activities for a long time. This is the extreme step that they have taken,” said a local resident who requested to remain anonymous. Belonging to the Manipuri community, the local resident said that a complaint about “Khasiya aggression” was submitted to the local forest office.

The incident has been brought to the notice of Cachar Police. “We are investigating the matter to find if it is an act of mischief or tree was cut inadvertently. Action will be taken as per law,” said Cachar SP Ramandeep Kaur.

While there was no temple that got vandalised, the locals said that it was a religious place. There is even a committee called ‘Mahadev Tilla Seva Samiti’ that looks after the maintenance of the place. “There was a Trishul dedicated to Lord Mahadeva. It has been thrown away. This is nothing but an intentional attempt to hurt religious sentiments. Moreover, the Khasiya people who practice Christianity, do not let us go next to the tree. They stand with weapons and chase us away,” mentioned the complaint submitted to the Forest Department.

Pinku Singh, Ranger of Kalain under Karimganj Forest Division said that a team has been sent to the ground which will survey and submit a report. “If we find any forest offence, we will lodge an FIR. According to a complaint lodged at the Beat Office, the tree was in land owned by a local citizen. So, based on the report submitted by the forest officials, we will decide the future course of action,” said the Ranger.