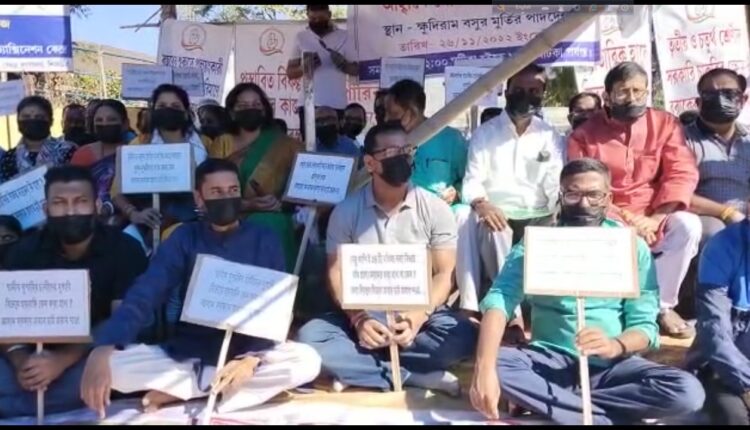 The Cachar District Committee of the Indian National Congress party observed an hour of silent sit-in protest today. In the demonstration, members of the party participated in opposition to price-rise and other problems faced by the people of Barak Valley at large and Cachar in particular. This protest comes just before the Assam Cabinet meeting in Silchar on November 29. The protestors wore black masks and submitted a memorandum to the Chief Minister of Assam through the Deputy Commissioner of Cachar. In recent light of the Meghalaya-Assam border issue, the party also raised the demand for an alternative route connecting South Assam with Guwahati.

The agendas behind this sit-in demonstration were price-rise, SOP for the sale of local areca nut, and job security for the unemployed youths of Barak. The memorandum signed by Tamal Kanti Banik, the Cachar District President of Congress read, “The people of Barak Valley are trapped in the dark dungeon gloom and despair as the much touted tall claims and promises by the power-that-be to resolve their burning issues are not implemented. But the well publicized news of the forthcoming Cabinet meeting to be held on 29th Nov, 2022 at Silchar instilled a sense of hope in their minds and people of Barak Valley are agog with the expectation that some of their burning problems will be appropriately addressed in the meeting”.

In a media address, Tamal Kanti Banik highlighted the demands and said, “We want the issues pertaining to Silchar and Cachar to be discussed in the upcoming cabinet meeting that is going to be held here. We have raised those demands and submitted a memorandum addressed to the Chief Minister through the DC. I trust that the cabinet ministers will surely discuss these issues during the meeting. Among the demands that we have, we want the issue of floods to be discussed that affected Silchar and proper measures to be taken in this regard so that such calamities can be avoided in the future. Another demand that we have is about the Burmese supari. The issue between Burmese Supari and local supari has affected the rural economy of this region. The government has talked about issuing SOP in this regard so that the local supari cultivators can trade their produce in a fair manner, but the SOP is still inexistent. Our demand is the quick introduction of the SOP and MSP for local areca business”.

The Cachar District President of Congress further mentioned, “The third demand is price rise. Everyone is aware of the price rise and GST and other taxation along with inflation has increased the prices of goods throughout the country, we want to know how our state government is dealing with this”. About the issues of third-grade and fourth-grade vacancy fulfilment, Banik said, “The vacancies in the third-grade and fourth-grade posts are being fulfilled in centrally after the recent recruitment examination that was held. But we know that according to the Indian law passed in 1959 these jobs are to be fulfilled through the local employment exchange so that the issue of employment is being resolved. The present government didn’t respect that rule and that is the reason why the youths of Barak can not stand or get better employment opportunities. We have always seen that the youths and people of this valley are being neglected and behaved step-motherly and hence we are always lacking behind. We want the government to answer this issue of why the people of Barak are not given equal opportunities and scope of development”.

The Congress party also addressed the recent violence in Meghalaya and the blockade of the road that connects Barak with Guwahati and the rest of India. On behalf of the party, Tamal Kanti Banik said, “We have seen earlier that there was an issue between Mizoram and Assam border which became violent and so did the recent issue between Assam and Meghalaya. The road blockade disconnects us from our state capital as this is the only road. What happened to the Mahasadak? Why is it still incomplete after such long talks? We need an alternative and the responsibility lies with the present government”. The one-hour demonstration called near the statue of Khudiram Bose was withdrawn at 1 PM this afternoon.