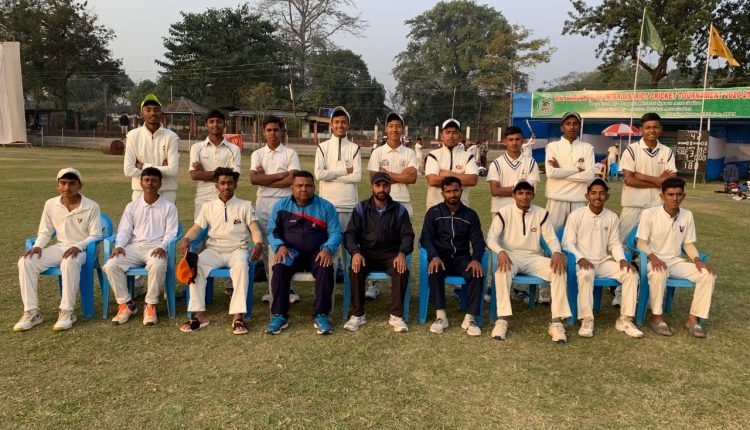 For the second time in a row, Silchar Under-16 cricket team reached the final of the RG Baruah inter-district cricket tournament. Defending champions of the tournament, the Silchar team was playing against Tezpur at Barpeta Stadium.

Winning the toss, Silchar decided to bat first. The team got off to a horrible start as both the openers returned to the pavilion putting one run each on the board. Captain Abishek Deb (24) and former captain Prashant Kumar (39) started rebuilding the innings. They stitched an important partnership and most importantly watched out the morning moisture on the pitch.

But the key innings came from the bat of Biki Roy who scored 89 runs and took Silchar’s score to 202. Abhishek Kumar also played a vital innings of 11 runs batting with the tail-enders.

Derhasa Boro was the star performer for Tezpur as he picked up eight wickets alone. Abrar Akthar and Sanjay Mahanta got one wicket each.

In the two-day-four-innings format, if the match ends as draw, the team with first innings lead is declared as the winner. Therefore, it was vital for Silchar U-16 to defend the first innings total of 202 runs. Tezpur started well as openers Subhash Saikia (20) and Abhijit Bhadra (32) had a fluent beginning. Abhishek Deb broke the partnership by dismissing Saikia. Bhadra got runout and Prithvi Raj Kashyap was caught and bowled by Parikshit Banik.

However, the celebrations of first-innings lead were cut short by Tezpur by bowling the defending champions out for 167 runs. Captain Abhishek Deb played an important 68-run inning and Prashant Kumar scored 20. Opener Shiba Sinha (26) was the only other batsmen to score in double figures.

After eight in the first innings, Derhasa Boro picked five wickets in the second. Abhijit Bhadra took the other five wickets. Tezpur tried to chase Silchar’s total down but could not. The match ended as drawn with Tezpur 44 for 4.