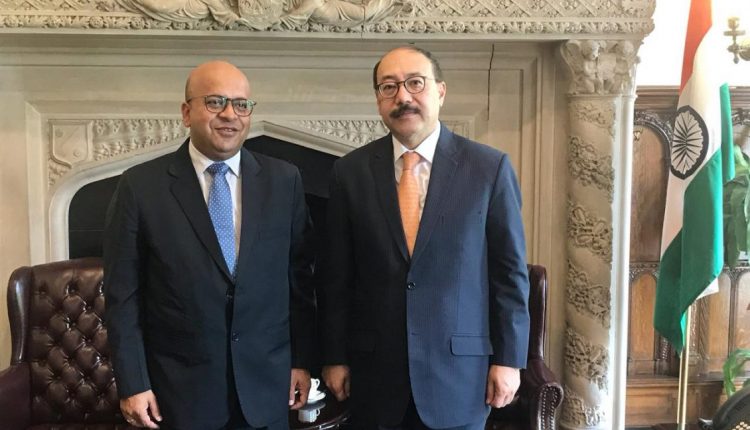 Washington DC, the capital of the USA is one of my most favourite cities. Coming here regularly for more than a decade, my fascination for this city never ends. I most enjoy the greenery and never miss a moment to walk and not be on taxis and cars. I also have been lucky to speak in some of the top think tanks of the world located here before I was 40 years old. I’ve spoken at the United States Institute Of Peace, The Brookings Institution, Carnegie Endowment for International Peace, Heritage Foundation and Atlantic Council.

This trip to this city for the week is for a speaking role in an event around South Asia. The timing is so good as the spring has set in and the trees are with new green leaves and nature beckons to walk and enjoy the tulips and lilies around. Even as I write this, I’m sitting in the Dupont Circle Park amidst nature with birds chirping and people walking.

However one of the hallmark of this trip has been to spend some quality time with the new  Ambassador of India to the USA, Shri Harshvardhan Shringla. He is one of our finest diplomats and has made a mark wherever he was posted: the most obvious is the last role before coming here as India’s High Commissioner to Bangladesh. Not only he improved the bilateral relationship but also endeared himself to a lot of the people there.

I spoke to him on a range of issues and potential of the north east region and particularly the tourism and trade potential of Barak Valley and Dima Hasao region. I’ve been working on a model of making Silchar as the hub for an enhanced engagement for tourism and business with 4 neighbouring states and Bangladesh and Myanmar and use those two nations route to reach the ASEAN countries. I discussed on how the Act East policy could be a game changer for the region and why economics should override the regular focus on ethnic and identity issues in the region. Not that these are part of his mandate here, but someone who understands our region well and the geopolitics, it always helps to position our perspectives better.

Of course I also spoke to him how I saw the India and US defence and security relationship revolving in the last decade and some of the priority areas in the future. In my earlier role as country head of General Dynamics one of the largest US defence corporations, I’ve seen closely how defence trade and cooperation has increased from a mere few million to USD 18 billion. The potential to cooperate in high technology areas are tremendous and mutually benefitting.

Vistadome Vistas: “Picturesque Mahur to Migrendisa was evocative and…