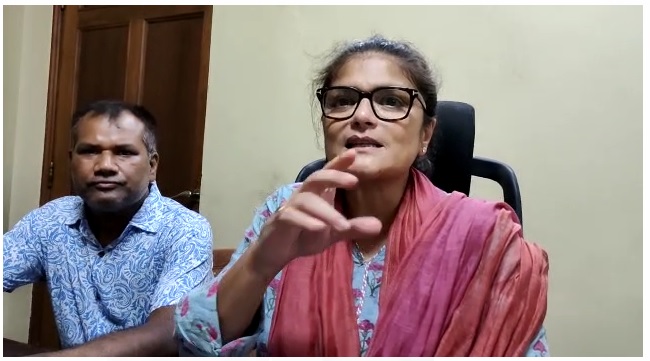 Sushmita Dev questions tax-hike when there is no elected Municipality body; Says, “Public service is not in the DNA of SIlchar MP, MLA”

Rajya Sabha MP, AITMC’s Susmita Dev voiced her opinion against the Municipality Board’s decision to raise taxes. Holding a Press Conference in Silchar, she questioned the motive behind the tax hike by the Municipality board based on an order by the state government. The Trinamool MP also questioned the silence of the elected representative of Silchar on this matter. She has challenged the state government and asked how they can increase the tax when there is no elected body of the Silchar Municipality. Dev urged the taxpayers not to fill up the self-assessment form and also warned the administration of a mass movement by the Trinamool Congress if the raise in taxes is not abolished soon.

“The tenure of the last body of the Municipality was over on April 1, 2020. Then in a cabinet meeting, you decided to upgrade Silchar into a Municipal Corporation. Now you (the state government) have delayed the election procedure and delimitation procedure. In these situations, why is there a sudden hurry for taxes? In the absence of an elected body, there is a district-level body that does the work of self-assessment. The district-level committee is headed by the Deputy Commissioner and the elected chairman and vice-chairman of the Municipality. In the absence of the chairman and vice-chairman, how is the self-assessment committee functioning? It is totally illegal,” said Dev.

She has questioned the government offices that are operating from buildings within the Municipality and said, “Before the citizens pay their tax, I want to ask this question to the DC and SP of Cachar, are they paying the property taxes of their offices? PWD Office, ASEB Office, government schools, colleges, and all other government offices also have huge buildings in the municipal area. I want to ask whether they are paying taxes and filing their self-assessment. If they don’t pay their taxes within September 10, we will boycott these buildings and offices”.

Addressing the elected MLAs of Barak Valley she said, “To the elected MLA and MP of Silchar, I want to say, there is no point in going to the DC, they are bureaucrats obeying the orders of the state government. Go to the Urban Development Minister. I’ve also talked to Jayanta Malla Baruah, who just took his charge as the Guardian Minister of Cachar. I have discussed with him to organise a citizen’s meet and then decide on the self-assessment.”

Taking a jibe at the elected representatives of Silchar, she said, “I’m very disappointed to say that, the elected MLA and MP who brags about having won with a huge margin of votes, why are they silent today? Did they enter politics and win the election for public service or self-service? Aren’t they ashamed of this? They don’t have public service in their DNA, they just know self-service. This has been proved and not just once, we saw this during the flood also and their motives are exposed again. They should have talked to the CM and asked to organise the election of the corporation first and then raise the taxes.”

The TMC MP has also said that if the fines are increased and taxes are not abolished, the Trinamool Congress won’t be silent. “I want to tell this to the administration and the police that, if we don’t get any positive response from the Guardian Minister of Cachar or the district administration, we will take to the streets and organise mass movements”. She ended the conference with TMC’s famous slogan “Khela Hobey”.